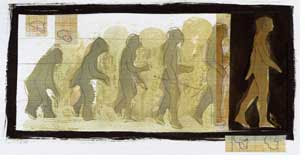 WSJ: Did we come from monkeys? Ask the Zoo Rabbi.
Posted by Hirshel Tzig - הירשל ציג at 11:06 AM

His essay establishes why the Gedolim are right. I cannot believe Slifkin is so misguided.

buddy (aka freindly anon), your support is welcome.

Anonymous said...
His essay establishes why the Gedolim are right. I cannot believe Slifkin is so misguided.


What did you see there that is so misguided?

when gd created the world in six days and on the seventh day he rested
on the sunday or monday afterward if we had our big proffesors there and they would have done a"carbon test" what would it have shown?

would there have been bones in the ground?

were the trees big and old?

were the animals old?

were the fish old?

>>What did you see there that is so misguided?

Using the Rambam as a precedent for something he would not be maskim to.

Is it true, that Netziv held, that evolution is possible?

It is amazing that these MO jews are fighting for ideas that are on the verge of kefira or kefira mamosh,that it has to coincide with there college education, but they are extremely sensitive to Moshiach that it has to be interpretated the way the typical jewish feeling of the shtetel.

when gd created the world in six days and on the seventh day he rested
on the sunday or monday afterward if we had our big proffesors there and they would have done a"carbon test" what would it have shown?

When Rivka had two nations in her womb, what would an x-ray have shown?

And that's one of the reasons chassidim don't entirely hold from the Tiferes Yisroel.

The question here is another one:

Is it legitimate for a frum Jew to accept these views, if gedolei Torah like the Rambam, Tieres Yisorel or Rav S.R. Hirsh allow for them?

While most Torah Yidden don't take the approach, is there anything wrong with someone who does? I think that's R' Slifkin's (legitimate) point.

>>but they are extremely sensitive to Moshiach that it has to be interpretated the way the typical jewish feeling of the shtetel.

There is the shtetl view and then there is this new view. No in between. Jews are uncomfortable with your new interpretation. And its not because they are ignorant about the subject, either. Much of your view is tangental to your assumption that your leader must be the Messiah. And the insistence and adamance in demanding this conclusion gets people really uncomfortable--if not for purely historc reasons.

>>While most Torah Yidden don't take the approach, is there anything wrong with someone who does? I think that's R' Slifkin's (legitimate) point.

"Much of your view is tangental to your assumption that your leader must be the Messiah."

No, actually, this view had nothing to do with this assumption, and was implemented by the Rebbe at the beginning of his leadership, when this assumption was nearly unheard of. What makes people uncomfortable is xenophobia, as is evident in almost every truly ongoing reiberei.

That is not at all true. The Rebbe set up the view and other began assuming he was referring to himself. Now that the moshiach issue is so hot in Lubavitch, it is not at all inappropriate for so many to be uncomfortable with the talk of revising how every other group looks at the issue of moshiach--if not merely for historical reasons.

You have the right to assume everyone hates you, but don't think its the truth. Lubavitch has done beautiful things for the klal. So did the Rebbe. The Moshiach thing did get out of hand. Ask any Jew--ANY one--what he thinks of Lubavitch and he'd answer--beutiful Rebbe, beautiful people, but the Moshiach thing is a bit too much for me.

There is no one other chassidus--not one other leader in the history of the Jewish people for a very long time, for that matter--who invariably had a movement centered so much on revising the way Jews have looked at Moshiach for millenia and subsequently based a movement on one person probably or definitely being the Moshiach. Everything else seemed almost to go as secondary to this all encompassing, highly sifnification reformation of Jewish thought and practice.

This is not about xenophobia. This is not about sinas chinam. It is about a community alienating its neighbors with a very new view of a controversial topic--again, for justifiable, historical reasons--and applying that position with extraordinary zeal which surpasses that of any other community in Jewish history for hundreds of years.

This, in my opinion, brought the extraordinary world of Lubavitch and what it has to offer a significant crisis in identity since the Rebbe's death and close to destroyed its superior standing in the klal.

And there is nothing anyone wants to do about it, as, naturally, Lubavitch thinks that its way is the only truth.

I love you as Jews, but I think you made mistakes as a group.

But of course, that does not take away from the fact that you are all beautiful yidden!

Does the Rebbe have to feel sorry for promoting Emuna in Moshiach on a daily basis? as he told for Mielech Neiman that I am crasy about Moshiach.

No one is being castigated for prompting emunah in moshiach. Such a question cannot stem from a reasonable reading of my comment above.

You misunderstood just about every point I made, but that's alright. I love you too, my dear fellow Jew. Just as you may have realized your challenge was misunderstood as well by your fellow anonymous. Please be careful when throwing out theories and "facts", they have a tendency (in everyone) to hit the wrong dartboard.

IMHO, the yearning for Moshiach that the Rebbe wanted to reinvoke in the Jewish nation (with some success, and let us hope for more!) can only be compared to the yearnings in the era of the Jewish poets and in the Nevuos of the Neviim. I don't think that is a bad thing by comparison.