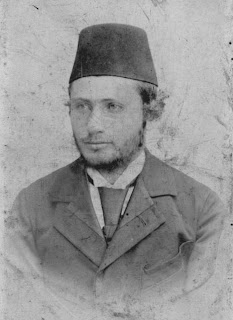 My father ZGZ came home from shul this Shabbos and recounted what he heard there. An American-born Stoliner Chossid (not that his birthplace is relevant here) davens in that particular shul and told all who would listen about a custom they have that's sure to raise some eyebrows. It should have all the so-called defenders of the Torah and guardians of Judaism screaming and condemning them, as is the case concernning Lubavitch, but of course it doesn't happen, because if it isn't Lubavitch nobody cares. It also feeds right into the hands of those that say that Chassidim don't follow the Shulchan Aruch whenever it's convenient for them. We of course know that to be full of baloney, but we'll allow those people to have fun anyway.

First, a little history. The great Reb Ahron of Karlin was a Talmid of the Maggid of Mezritch. He passed away at the young age of thirty six, and left a son named Osher. He also had a disciple, Reb Shlomo of Karlin, who took the young Osher under his wing and raised him like he was his own. Many of today's customs are based on Reb Shlomo Karliner, including the loud, very loud davenen that Karlin is famous for, and it may be safe to say that were it not for him there would not not be a Karlin Stolin for us to enjoy. He passed on the teachings of Reb Ahron HaGodol to Reb Osher, as well as to others like Reb Uri of Strelisk and Reb Mordche of Lechovitch. [There's also lots of talk about him being Moshiach ben Yosef, being that he was killed by a Cossack, but we'll leave that for another time.] Suffice it to say, that despite him not being part of the Perlow family, that Reb Shlomo plays a very important role in today's Karlin-Stolin.

Reb Shlomo's Yohrtzeit is the 22nd of Tammuz, smack-dab in middle of the "three weeks," a time when we don't make weddings, don't buy new clothes, don't make a Sheyecheyanu, and generally consider it a time of mourning. It seems like the Karliners wanted to make something special out of this day, being that the Tzaddik's Yohrtzeit is a time of great joy in heaven, so they did some simple math: The three weeks is twenty-one days, right? and how many days do we keep? twenty-two including Tisha B'Av, so that leaves an extra day, right? Great! so they proclaimed: From hereon in the 22nd of Tammuz is not min HaMinyan! They make weddings, say Shehecheyanu, and do anything else forbidden during the other 21 days. For some reason, anybody I spoke to seems to be OK with this line of reasoning, saying that they have it on good faith, and that the Minhag has it roots Beharerei Kodesh. I would also like to point out that the Minhag has the Haskomoh of the late Ponovizher Rosh Yeshivah REMMS, who was the Rosh Yeshivah in a Karliner Yeshivah in Lunenetz for a number of years, and who presumably saw this custom being practiced year after year after year, and did not protest.
Posted by Hirshel Tzig - הירשל ציג at 11:16 PM

the guy in the photo - what's he got to do with it?

Before the War Karlin-Stolin was a Lithuanian chassiduth with a small group of followers in Eretz Israel. Today its a Yerushalmi chassiduth with some American followers in Brooklyn.
It is related that a Litvishe Yid walked into a Stoliner kloiz in Lita and heard the screaming and saw the gesticulations all during the davening and then went over to their leader and said "Efsher host du shayn prubirt mit guttenes"
VeDAL

The guy in the photo? nothing, absolutely nothing.

I just needed a picture.

Is the Yid in the picture the father of Rabbis Ezriel and Sholom Ber Chaikin (and the second husband of Rebbetzin Ushpol AH)?

why would their father be wearing a Fez?! a Turkish hat?

This Chaikin is from the family of Reb Chaikel Amdurer. See the "Here" under the name.

HIRSHEL
Is a Yom Hilule a day of simcha in the world of Chabad ? eventough the word Hilule means a wedding I think,I am not talking of Rashbi that the AR has a long biur in the Sidur, but Chabad Rebbes, there was farbrengens as yom segula but there was no empahasis for simcha,maybe I am mistaken.

C'mon, cut it out already.

If רבינו הגדול זצוק"ל didn't protest, presumably it was because he wasn't interested in a בּרכה לבטלה.

I'm not sure I get the point. Is this an exercise in baiting or is it a serious attempt at understanding the practice of others. If the latter, then some learned treatise sans social commentary might be instructive. Why indeed is the clear opinion of the Ramo suspended for this day? Perhaps for Karliner it's like the Hillulo of their Rashbi during S'firah?

What are YOU getting all excited about? Since when did you late daveners, that ignore a sheine chelek of shulchan aruch (from not sleeping in the sukka, to not eating shalosh seudos, to eating before davening to your drunken binges, etc.) care about halacha?

Tzig:
Do me a favour and look up the halocho, before you scream.
The gemoro talks about Meshenichnas Ov memaatim besimcha and midineh degmemoro for example only at seuda hamafsekes is wine and meat ossur.We, the Ashekenazim have a commendable minhag to start at shivo ossor betammuz some minhgei aveilus.
Btw, what about all the people walking aroung cleanly shaven without the 'excuse' of a yohrtzait??
Additionally I never heard about the wedding thing, maybe you got that wrong

I guess it is like the Hilulah of the Rashbi, but the question is where the basis for it is, meaning, where did this Heter come from? Lag BaOmer is the day when the Talmidim ceased to die, and accoriding to most opinions is the end of Sefirah as far as Minhogei Aveilus is concerned. 24 Tammuz is not.

Maybe I am wrong abou the weddings, but definitely NOT about the music and Shehecheyonu.

Please try and stick to the subject, and refrain from dragging others into the conversation. If you have no answer just say so.

As far as a heter for shaving goes: I never condoned it, and I'm sure there are Heteyrim, especially in Corporate America. The Chasam Sofer gives a heter in the 9 days too, and that was in a time when appearances were less structured, and you could be a Mentsh with a beard. Today you're a monkey if you sport a beard.

"Rabbeinu HaGodol" quit his job over the Bochurim taking time off from learning, he wasn't Yotze with a Klap oyf di Bimah. I'd imagine he'd do the same if he disagreed with the 24 Tammuz celebrations.

Listening to music is no big deal.
Especially on an auspicious day(for them)
I brought the shaving in to show you that that does not bother anyone, so why the geshrei over a hilulah BEFORE rosh choidesh?

"Rabbeinu HaGodol" quit his job over the Bochurim taking time off from learning, he wasn't Yotze with a Klap oyf di Bimah. I'd imagine he'd do the same if he disagreed with the 24 Tammuz celebrations"

I think this is called over reach. I guess Rav Shach was a fan of Nusach Sefard and all other chassidish inovations, becuase 'he didn't quit"!!! I think the diffrence is obvious, bitul torah goes to the CORE of what a yeshiva is

Hirshel
Are you sure you are not mixing the Nodah Beyhuda with the Chasam Sofer and chol hamoid with the 9 days?

I'm having trouble seeing the anonymous (sic) connection between the practice of shaving versus music and merriment at a Yom Hillulo. There are opinions that, the mode of Minhag Aveylus of the three weeks is its connection to the Aveylus of (rachmono litzlan) Yud Beis Chodesh. The nine days share the aveylus of Shloshim, and Tisha B'Av the aveylus of Shiva.
The change in practice for the aveylus of Yud Beis Chodesh with respect to shaving has been established along the principles of Goarim Boi. I'm not aware of the practice of merriment and music at a Yom Hillulo during Yud Beis Chodesh. Perhaps they consider it a Simcha of "family" and are all waiters. I don't know. It's dochuk to me, but that is nothing new, given that B"H I don't know Hilchos Aveylus.

by the way we don't make chasuna's and there is no music, only shehechiyanu