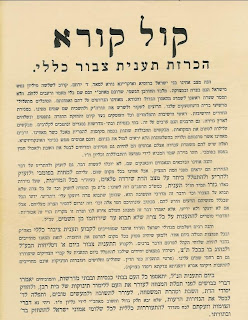 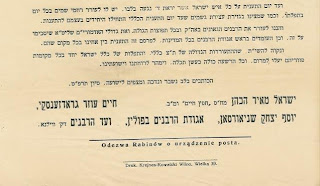 When Rabbonim and Roshei Yeshiva could put aside their ideological differences and work for the greater common good. The three above-mentioned leaders of Russo-Lithuanian Jewry signed a call for Jews to fast in light of the hardships facing the millions of Jews in the Soviet Union. Those days are over, and have been since WWII, when supposedly the atrocities were supposed to bring us closer together. I guess G-d didn't get the memo....

Those SNAGS had the chutzpah to put the Chofetz Chaim before the Lubavitcher Rebbe.

Hey Tzig? You gonna let them get away with this?

The Chassidim put it like that, not the Snags. They actually respected him. Can you believe it?

You can add to that, the letter of reb Aron Kotler to the FR thanking him for money he granted to his yeshiva,Yossi Jacobsen printed the letter a few years ago.

Rabbi Yashar writes that the heiliker Chafetz Chaim said that his biggest regret was leaving the Soviet Union rather than staying and fighting the Communsits.
So its amshma that he admired the late Lubavitcher rebbe the Rayatz who did exactly that.

There are many other anecdotes in which the Chofetz Chaim clearly states his admiration for the Rebbe Rashab. I don't know if there was a relationship with the Frierdike Rebbe per se, although I'm sure they had to have met while the FR worked on his father's Askanus.

The Chofetz Chaim's relationship with Chabad began with the Alter Rebbe already, he quotes him tens of times in his seforim as the Gra"z = Gaon R' Zalman

You shouldn't allow y.w editor to link to his website as he forbids links on his plagiaristic website.

And do you know what follows from that relationship? Chabad respects the Chofetz Chaim! Isn't that amazing, that just because his focus and the focus of Chasidus are not the same, it didn't have to breed animosity. Which can certainly tell us something about those who do carry animosity.

No one had a (serious) problem with Lubavitch until the last 2 Rebbes started hinting that they were Moshiach. Or in R' Aharon's case, until the Rayatz said that the litvishe bochurim were no good.

It's true that there was a very close relationship between the Chofetz Chaim and the Rebbe Rashab.

1. R Foleh Kahan writes that when the Chofetz Chaim visited the Rebbe Rashab, the Rebbe Rashab escorted him out the door - which he'd never seen him do with any other guest.

2. He also writes that the Chofetz Chaim once stood up for the Rebbe Rashab at an Asifas Horabbonim, saying, "Arguing with him is like arguing with Moshe Rabbeinu".

ailomisher, did you mean that comment seriously or as an exxageration? No one had a serious problem with the Alter Rebbe or the Mitteler Rebbe? And how do you define serious?

the Rebbe Rashab sent 6 telegrams to the Rebbe, RM"M's father on the day he was born, giving him special instructions on how to deal with his holy son.