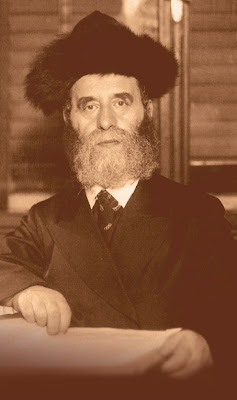 Sunday, Hey Teves, was 50 years since the passing of the Sadigerrer Rebbe, Reb Avrohom Yaakov Friedman, zt"l, the Baal Avir Yaakov - (whose sefer I also yarshened from my zeide, incidentally, just like the Emden Siddur...) המבשר newspaper in Israel had a beautiful insert devoted to him, and I unabashedly cropped the beautiful pictures from there, one-by-one. Reb Avrohom Yaakov was an older brother of Reb Shlome'nyu, whom we discussed last summer. He left no children, r"l. 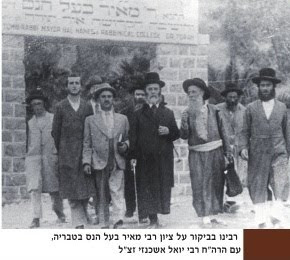 Leaving the tziyun of RMBH in Tiberias. 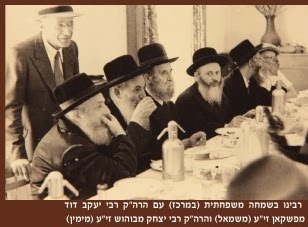 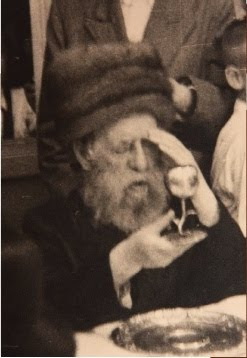 What can you say to a pic like this? 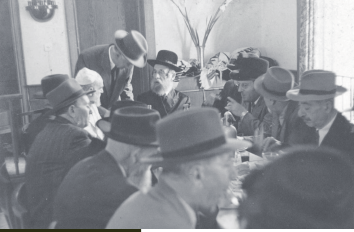 Such was often the "look" of a tish after WW2 in Israel.

With Rabbonim Hertzog, Unterman, Mayor Gershtenkorn and others

See the whole section from HaMevaser

CHAVAL AL D'AVDIN...He was from the last ones after the war. He was not a just Rizhiner Einikel(look at interview from Aguda Convention in Hamodia with one- a normala mentch kan nor brechen), but a RIZHINER REBBE. After him they were: his brother, Boyaner and the Bohusher.
Hadron olokh msekhtas Rizhin v daton oloch :(

The tish looks fine; erliche yidn without beards. Looks good to me.

klainer
I have no problem with it. It's just not what we're used to these days...

Russian chusid! The haynticker sadigerer is nothing?!! We must also remember how he was before parkinsons affected him!

Anon,
I do remember him. Voile yid which knows how to learn and was always nehene myigia capov, but a Rebbe???? Most Rebbes of today do not even have the above qualities, but it is not my fault.

Russian chusid, yes a rebbe!you had to notice his hanhugu with his old time poilisher chasidim to "notice" this.

Russian Chusid,
You mean Rappaport's interview with some chortkover einikel that is a big chusid of the Lakewood Mashgiach? He likes to quotes all Misnagdisher gedolim,
Alles is Gut in Fine, but what is Chortkov all about, I can find my Gedolim vertlech in 100's of seforim, I dont need that Moach Koton of Chortkov for that, he considers himself the Machzir atore Leyosoisnoiof Chortkov. Rappaport does not get it, and plays along with this cutesy stuff.

Whatever...I will not argue about him-it is too personal and does not really matter. He is definitely from the better ones out there and he was around and pretty close to a lot of old time Rizhiner Rebbes(including his father who was a real Maccoy, and was not a professor in YU) and he knows what it means to be one(unlike the so-called Boyaner)-that's for sure.

Russian Chosid
in after the war Eretz Yisroel there was a Chortkover Rebbe, his Tzion is on the Har Hazietim?
was he a son of Reb Yisroel? What year did he die? is their some stuff printed from him? Is this guy from Europe his grandson?
I am curious because my parents were Chortkover Chasidim before they changed to Belz. Their was some small relationship to Chortkev but not much.

:)
I DO NOT CARE WHOM HE QOUTES- WHAT HE IS BOTHERS ME-MOACH KUTTEN. This is opposite of Chortkov and even his fathers WHO WAS A HUGE BAAL MOACH.

It is also makes me nervouse when he talks about Rizhiner Derech, which he learned from N.D.Bryer, son of proffesor M.Bryer. Hah,hah

can you blame Boyan for choosing Reb Noochem Dov? Whom else should they have taken? His 50 year old bachelor son?

a)50 years old bachelor was chasidish as a bukher, and had much more kashroines then ND, AND his grandfather spoke a lot about him. He was pusshed of by the Johns Gotis of Boyan for being too independent.(actually he left on his own when he understood the scoop)

b)Yes- does it have to be an einikel??? what was wrong with R Binyumin Rabinovich???

is he not at NASA?

he was there.if he is still there i do not know. he got married, by the way.