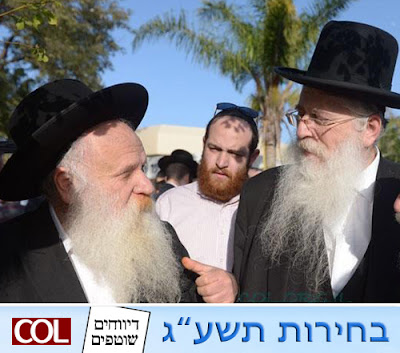 So the elections have come and gone. We now can diagnose and dissect the results. Lots of the discussion was about how much Gimmel (UTJ) would get, whether or not Amnon Yitzhak would get in, and if he did how much damage would he do to Shas, and of course, how would Chabad vote. Looking at the raw numbers you'd get the wrong idea. There's great distrust in the Chabad community for UTJ, some of it because of Gush Katif, some of it dates back to 5749, and some of it back to ---- what, 5532? Then there's the issue of מסירת שטחים to the enemies of the Jewish People, which is forbidden according to the Holy Torah - something some Gedolei Yisroel don't seem to think is their business. Many Lubavitchers seem to think that they need to vote that issue above all, why even Reb Yoel Kahan said so the last time around! At least he said that we cannot vote for Gimmel after what the Yated wrote abut Chabad and the Rebbe just prior to the last election. This time around - to their credit - UTJ's Reb Meir Porush pushed hard for Chabad's votes and it paid off. Ignore the numbers if you will, or look at it this way: 1/3 of Lubavitchers in KC saw past the distrust, the dislike and worse and voted Gimmel! They are not Agudah partisans, they have no love for several of the UTJ's MKs and for many of its leaders, but they did their duty anyway. They heeded the Rebbe's call to vote for הרשימה החרדית ביותר. Based on the numbers of eligible voters it seems quite a few stayed home, not willing to vote Gimmel, but not able to vote Otzmah when the Rebbe said Charedis. I think that a more vocal chorus of Rabbonim and Mashpiyim calling to vote Gimmel would have accomplished even more, but maybe they weren't willing to stick their necks out, for fear of being proven wrong by UTJ - G-d forbid. All in all it seems like Porush is happy with what he accomplished. I believe we will see an improvement of relations between the Chabad and general Charedi world in the near future.

what does that say about the parties involved.

Between you and me I dont think much has changed on the ground between post Gush Kativ and the Shach days, so when the rebbe said vote Charaydi, they should vote charaydi.

Satmars you halachicly may not follow the following link.

"Then there's the issue of מסירת שטחים to the enemies of the Jewish People, which is forbidden according to the Holy Torah "

Don't want to nitpick
BUT, that's clearly Lubavitchs' position, the majority of rabbonim hold that one definitely, may give up or must give up land for peace, including Rav Ovadia Yosef shlit'a.
So yes, your rebbe disagreed, but please don't make it sound like rabbinim who hold it's muttar are going against the Torah.
AND, no, I"m not getting into anargument whether, giving land back has been a good idea or not.Obviously if nothing is gained by giving back than there is no purpose in doing so.I do believe that the peace with Egypt was the righ thing to do.

It takes the courage of a man like meir porush, who has been "down" but never "out" to re-shuffle the decks to get communities like chabads back on board.

This post is pretty ridiculous. The Rebbe said vote as Charedi as possible, despite this, people preferred to throw away their vote for Otzma rather than maybe help out with Gimmel. And you are saying there's a rapprochement between Gimmel and Chabad? Thats super illogical. They defied their own rebbe to throw away their votes in an overwhelming majority of instances because they dislike gimmel.

I just love how yoni makes blanket statements "the majority of rabbonim hold that one definitely, may give up or must give up land for peace, including Rav Ovadia Yosef shlit'a".

No particulars on who the majority is. And "EVEN" Rav Ovadia Yosef... Wow, that definitely makes a majority...

It so happens to be that the Lubavitcher Rebbe also holds that one may give land for peace, but holds that there is no peace to talk about. If, in theory, there would be peace coming from our cousins, then he would agree to a land swap.

The argument boils down to whether in fact there will, in fact, be peace.

Yoni
"So yes, your rebbe disagreed, but please don't make it sound like rabbinim who hold it's muttar are going against the Torah."
Doesn"t reb Ovadia believe that every sefardi that goes against a pesak of the Bies Yoisef, goes against the torah????
There are many sefardic poskim that think different, but he still thinks his way, so the Chabadnik has his rights to hold his views on a matter of life and death.
The fact is that the facts have shown that the Lubavicher Rebbe was correct 100%, even on Egypt...

Yoni
".I do believe that the peace with Egypt was the righ thing to do."
the last 3 decades it looked that you are correct, but now it does not look that way.
In the same 3 decades we had no war with Syria and jordan neither and no land was returned..

Moshe Moshel
"It takes the courage of a man like meir porush, who has been "down" but never "out" to re-shuffle the decks to get communities like chabads back on board."
The Porushes have politics running in their veins, Its a family gene, his successful paper Hamevaser is also proof for that.

Hirshel
Porush probably got also alot of votes from Chabadniks in Jerusalem,which is hard to decipher.

Leaving aside the personalities that make up Otzma,and judging purely on ideologies and actions, how exactly is UTJ more charedi than Otzma? Which of Otzma's shitos are (were? they will probably be back in some form) not in tune with the Rebbe's shitos?

Shleimus HaTorah - Tie - They defintely do not support throwing bochurim out of yeshiva at 18.
Shleimus Haam - Tie
Shleimus Haaretz - Otzma clearly wins this one. UTJ may not have been in favor of concessions, but they hardly fought it the way they would have if that was their issue as it is Otzma's.

I'm not sure that saying that since things turned out a certain way, that "proves" that a particular view was correct and halacha. There are different opinions on this matter, and whilst certainly I do not fall into the "camp" of those who want to return land, I'm not sure I'd be happy to call those who say that one should try in order to attempt "peace" acted against Halacha!