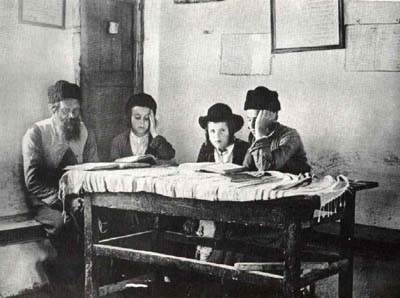 People are busy preparing for Shavuos, each in his own way. If you read the "Charedi" press where they bring aticles from today's gedolim, or listen to Droshos from today's Darshonim, then you would see that the preparations that involve the male segment of the population all involve strengthening their commitment to studying Torah. The women I won't bother with now, they've got enough on their minds.

On Shabboss afternoon in the Chabad Shul the Mashpia speaks about the Mitteler Rebbe , when asked what he would like to merit this Yom Tov, he says, to feel the "Lahavas Eish" that burns in the hearts of the Ish Poshut. The Talmid Chochom is like the Eitz Hasodeh, the imposing tree, but the Ish Poshut is like the Sneh, the burning bush, that does not get consumed by fire, it's always hungry for G-d. So, although the Torah is what connects you to Hashem, the Ish Poshut is appreciated more for his sincerity, for his words of Tehillim, his simple recitation of the words of Torah. These wordsof the MR are based on the appreciation that the Baal Shem Tov had for all Jews, especially the simple ones.

So why is Chabad the only group that continues to preach this angle? Why has it happened that in all other Chassidishe circles the ideals of the Yeshivah world have seeped in so strongly that only the learned are appreciated and respected, and the simple ones frowned upon? That's not to say that learning isn't condoned and appreciated, on the contrary, Chabad was organized in order to strengthen the learning and deeper understanding of Chassidus. They have managed however, to realize that the greatest Lamdan and "Maskil" of Chassidus can still appreciate the simple Jew.

In other circles this seems to have been forgotten. Many Chassidishe Bochurim that have a Geshmak in learning run to the Litvishe Yeshivos in Eretz Yisroel and elsewhere. They adapt the Litvishe style of learning and are embarrassed to be associated with the simple Jews, so much so, that in many cases they're ashamed of their own Minhogim, looking at them as a complete waste of time. Shavuos is a time when this manifests itself for all to see. If you look around your Shul, and you see a young man or Bochur in the Chassidishe levush learning Gemorah instead of sayig Tikkun, that's your man.

So, next time you hear from a Chassidishe Yungerman, that you "live in a different world", tell him he's right, because you're living in the world that the Besh"t left for us.
Posted by Hirshel Tzig - הירשל ציג at 10:31 AM

.In addition: if what you are stating is correct: then you're affirming that there are no "anushim pshutim" to be found elsewhere outside of our circles. this is another flaw in proper thinking and in reality.

with blessings of receveing our Torah "Bessimcho Ubipnimiyoos" which means that we reveal in ourselves and others and joy how ALL JEWS TOGETHER receive the Torah and if it is not happnening it seems that WE are missing in our Avoda.

This post was on the money. Keep it up!

tziggy, provocative good piece, but where is the traffic? gotta publicize your site.

Maybe I should wear a sandwich sign wherever I go?

heshy, the site won't get traffic if you don't do something about it...what to do? any savvy internet linkage search engine suggestions?

I recall Reb Nachman of Breslev said Es vet kummen a zayt as es vet zayn azay shver zu gefinen a pashuter yid vi haynt a zaddik,
We have arrived at that time today. There are no pahuter Yidden. Everyone is a daf yomi Yid (what happened to the chevras of Old Eyn Yankev, Cai Odom Chevra Tillim etc -Rav Kuk studied Zeaneh UReanah !!)
Ever Yid is a Naggid and a gvir, no one admits to being a mddle class guy . A poor Jew - Man DKarai shmeh
Every Yid (especially in the Hungarian world is a yachsan an eynikel of the Bach or the Kezos Hachoshen or the Maharal (as my father used to say durch'n Geylem bist do takeh an eynikel)
You are very correct there are no pashute Yidden anymore

In my opinion Lubavitch has done a very poor job of conveying this special feeling for der pashute Yid to the wider Orthodox community. Rather Lubavitch too seeks to play into this game with titles straight out of Bnai Brak -Hagaon Hachasid -. The folkstimlikeit of old Chabad has almost disappeared.
Yet the nitzutz is there and I hope you develop it.
I spoke a number of years ago at the chanukas habayis of a pseudo Chabad shtibel and I pointed out that learning etc should not be the exclusive business of this place rather chesed and dibuk chaverim avoda etc need to be stressed un mit on kin shnada.
I wish you guys the best in these inyonnim.

The current Gerer rebbe Admor rav Yankev Aryeh Alter shlit''a has also launched a major campaign to bring down the learning elite in Ger (believe it or not) He has stressed only bekius no iyyun and has awarded the shishi aliya in Jslm Beth medrash when he is not there to the most simple Yidden. He has also enacted other such takkanos designed to reform the elitism of Ger.

It seems that he is working very hard on being mevatel the yeshus of his cousin (the Rosh Yeshiva) as well. I guess that is part of his "reform of elitism of ger".

Yes the pashtus enamored by past narratives seems to be gone (in ALL circles - Lubavitch included betoch shar ...yisroel UBEROSHOM!) there seems to be something else that is missing that came along with the pashtuss that was transmitted to us: the idea of earning of living HONESTLY and the idea of not living of someone else and of shnorrin: when you investigate around you'll see that in some of other kreyzen there is still some kind of talk of the kind.

ish poshut and not living honestly is a contradiction in terms. there can be no living temimussdik and pashtussdik (that contains and leads to emunah peshutah) when in REAL life these qualities are missing: it is a bechinoh of "ganvoh apum machtartoh..." .

A poster mentioned about Hungarians being "yachsonim" etc.; but interesting to find amongst them MANY that are inolved in chessed leshem chessed (not wanting to be written in the newspapers etc.) I know this first hand being a recipient of that chessed...

regarding a chassidisher learning gemora instead of saying tikun... Is it not true in lubavitch that chassidis is promoted so heavily plus other learning responsibilities that the hours left in the day for gemora are very few..perhaps so few that most bochrim don't have the proficiency or geshmak to learn gemora post yeshiva... There is a chauvanistic sentiment among the lubavitch populace relative to the 'misnagdim' that licences abregation of learning gemora because thats what they (misnagdim) do with such misplaced priority. Thats while in yeshiva; post yeshiva how many lubavichers actually learn gemora?

But, to echo some of the words posted above, I wonder how much of the "pashute yid" stuff, is mere lip service.
Like most things today, I see very little connection between sentiment & substance, but the sentiment is surely true - and should be spoke about.

I also don't agree with the common disparaging of limud hanigla by many mashpiim, because in all honesty we need to add to the limud hanigla, not supplant it. The goal is to learn nigla, learn chassidus, earn a parnossa - but to do it all with a temimus & peshitus od the pashuta yid - no? But any chossid who disparages saying Tikkun instead of learning Gemmora has surely lost his way.

CE
I would think that Mashpiim push the leaning of Chassidus because that's what THEY do, Learn Chassidus!, so maybe we ned for the Roshei Yeshiva to farbreng with the Bochurim!

May I make the following notes. I stand by my statement that Ungarishe Yidden are very concerned about Yichus while most Polish and lithuanian Jews much less so.
I agree that many Hungarian Jews especially of the old Cheder are dear Jews and I love them dearly, even though i am a Kalte Litvk.
Next a 1st step to regain a sense of what a pashute Yid is , woyuld be starting to learn the Sichos und reyd of the 6th Lubavitzer rebbe the Rayaatz. Nothing I have ever seen captures the tmimmus and harzikayt of the pashutetr shtetl Yid that my father called a shul Yid (not a charedi or a Shomer Shabbes or a Yereim but pashut a shul YID).
Lets start emphasizing the sichos of the 6th rebbe.
The blogger who connects pashtus to a work ethic is 150% correct.
I have spoken to Hungarian Chassidic yungeleit who mourn the loss of the model of a pshute Yid who works horevet fara leben and is kova Itim and does Chesed vechuli. He is replaced by the KOllel man who in many cases does nothing bechol hainyannim.

I think you're being a little unfair. This attitude is also still alive in Breslev and Stolin and probably some other Chassidic groups. Plus the way it is internalized in Chabad has a "dark shadow," too -- in that many come to have actual disrespect for talmidei chachomim and rabbonim! But overall, I think you're right. Chassidus has become very distorted. Perhaps another example of "Toras HaBaal Shem Tov nishtakach?"

Friends
from what I see, and I do see alot of them, most of Stolin is Kollel Yungeleit, blutige Orimeleit who live like Schnorrers, you'll excuse me. If you ask me I don't think they should be emulated in that regard.

Yoichi (yea, right) -
What does being poor have to do with Chassidishe values? I thought the point here, was recognizing the Baal-Shemske mayla of the ish pashut?

I meant to say that they are not the typical Chassidishe Baal HaBos, because they do not work for the most part.
I have great respect for Stolin, as a matter of fact I'm named aftert he previous Stoliner Rebbe, zt"l.

in addition to all great points made here, "pashtuss" discussed in
the FR Sichos and in a different )maybe with less nostalgia and a bit more of realism) way by the REbbe's sichos (which btw a nice defintion always said about our Rebbe: "a Go'on in Pashtuss" and is seen in many sichos how deep concepts in many areas of torah are "innovated' with a Geounus in "pashtuss") preclude the mindset of doing things and looking on one's shadow to see if what he does is being recorded immediately in the airwaves of the internet etc. (i'm not minimizing the force and inyan of "mitzvo lefrssemoyssseh mitzvah", but we are discussing "pashtuss" ).

Surely "sentiment" should be spoken out; but when it is contradicted by actions is "toyvel vesheretz beyodoy" and worse for it allows one to perppetuate to claim one thing and at the same time act lehepech.