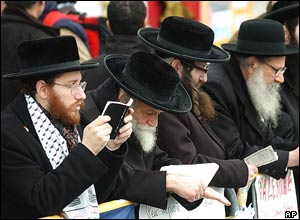 There are those who claim to love G-d and defend his laws, then they go and do the craziest things, things that make the G-d haters out there even more brazen.
Those of you who watched the Arafat dying fiasco in France last year will remember this guy,he's the Arabphile on the left, praying for his majesty's speedy recovery.
A while back he tried to make a Bris in Antwerp, where his in-laws live, but he was thrown out of Shul. Now, he's made a Bar-Mitzvah for another hopeless child of his in Vienna, and look who came to the party. Seems like he's trying to gain state recognition as "chief rabbi" of "Torah-true" orthodox Jews in Vienna, something not easily attained, so he's gotten a friend to go to bat for him. Which gets me to thinking: How is it that their so-called zealots, in whose heart burns a love for Hashem can join with murderers and Nazis? I can understand throwing stones, burning trash bins and the like, but this? Does this mean that all zealousness is nothing more than anger and negative energy channeled incorrectly, and that had these people been born Muslim they would've been Muslim extremists?
The Torah is full of examples of zealousness, from Pinchas on, so they do have a platform to stand on, but is this what was meant?
Posted by Hirshel Tzig - הירשל ציג at 12:29 PM

Was not Uriel Zimmer one of the ideologues of the group you write about here a close Chasid of the Late Lubavitcher rebbe?

Gateshead, welcome.
Reb Uriel was not of the opinion that we should throw ourselves under the good graces of Abu-Amar and pray for his recovery.

Rav Ovadiah may have met with him, but he didn't say that he's a good, righteous man and should be our Sar HaDatot. The Syrians who went to the funeral were trying to get some favors in return, like release of family and property.

I'd like to say that today's so-called Kanoyim don't hold a candle to Reb Uriel, who was a truly sincere man, who didn't need to criticize publicly everybody who he disagreed with. He could still respect a dissenting Rov or party opinion without calling him or them "an Apikores".

I think this Vienesse dude, had he been Lubavitch would have opened up a blog to 'defend' Lubab and 'attack' all those 'menagdim' both Litvish and chasidish.
I, for one have never seen a more partisan cult than the one Tzig defends.Meshichisten, no problem,dead 'Nosi Hadors' no problem,Boreinuniks, no problem.....B'kitser, if you are mekabel malchus, nothing is a problem.
Tzig, please try and look in the mirror before you post.Yechi Hamelech (and Elvis)

Malach, are you the real one?

Show me where I've defended any of those.

I think we can safely say that this guy, together with Beck and friends have become the messengers of all Jew haters, including Satmar, Malochim etc.