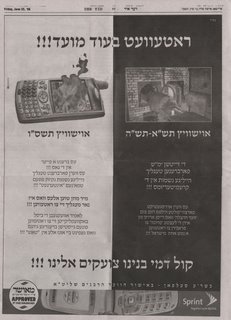 PETA (People for the Ethical Treatment of Animals) caused a ruckus when they compared eating chicken to the Holocaust with the ill-advised ad campaign called "Holocaust on your plate". Der Yid took a page out of their infamous book, by comparing the internet to a oven in Auschwitz. The point here is not to debate whether or not the internet is harmful to innocent Jewish souls, and that Jews should buy only those cellphones that are "approved" by Rabbonim, which is the inderlying message of the ad shown here, but rather how they go about making that point.

You think they took this a bit far? You think that's an understatement?

You would think that a community that was built by holocaust survivors would be more sensitive to the issue and would find some other way to convey their message, if there's a message to be had at all. I just don't think that PDA's are the root of all evil, but that's just my opinion. Maybe they should've shown actual dead bodies, not just crematoriums?
Posted by Hirshel Tzig - הירשל ציג at 11:00 AM

PETA is comparing the slaughter of chickens to the murder of jews. Juvenile, propoganda type comparison.

Der Yid is comparing physical destruction to spiritual destruction. Valid comparison in that this form of media insidiously infiltrates, effects, and can destroy, but flawed in that the internet doesn't target yidden.

Can one use the holocaust as a tool for comparison? Whether we like it or not the holocaust is becoming less personal over time, as those who actually lived through it pass away. The rest of us may have visceral ties because it affected our parents, grandparents, etc. but the holocaust over time is transforming into a historical footnote (albeit a big one), rather than a benchmark of present day living.

Sensationalism and exaggeration are regular features of that publication and have been so for many years. So something like this is not too surprising.

Not your question, but don't you see how the internet is perceived as enemy number one for frum yidden in america? And never mind perception; the internet corrupts wholesale. Today every computer or cell phone is a road to all places.
For physical saftey I have baby gates by my kitchen entrance, for health safety I hide the nosh so that I can give it out at auspicious times, and for privacy i have a lock on my bedroom door. My five year old hops the kitchen gates, and locates and pilfers nosh no mater where it is hidden or how high up it is stashed, and my seven year old picks my bedrooom lock. Kids have a drive of curiousity that is almost unstoppable, but once they get to their destination, the ride is over, ie, they get into the kitchen, grab a cookie, eat it in my bedroom. But a kid on the computer gets on the internet and the destination of curiousity turns into the beginning of a sordid relationship of wasting time, entertainment, inappropriate material, movies, culture, and potentially much much more. And of course its not only young kids that are suceptable to exposure to all roads both imaginable and unimaginable, but the rest of the population....this is really scary stuff if you think about it.

Sensationalist advertising for a product/service that I understand borders on a scam. Der Yid should be more careful when approving advertisements, but it would not surprise me if the creep behind the kosher cell scam and his "rabbonim" used coercion of some sort or another to get this dreck, which belongs in Der Shygetz, into Der Yid.

we all know the dangers of surfing the 'net without proper supervision or filter. The question here is do such sensational ads actually hurt the cause that it purports to want to help. I would think most people would think that the message is overdone, way overdone, and that these people are really going too far in trying to convey the message.

Itzik:Why does the internet free service 'border on a scam'?
You don't like the ad, no problem, but don't get carried away

tzig,
glad that you are interacting again. For der Yid readers the internet is a holocaust. for a lubavitcher, assimilation is an identifiable holocaust. Both holocausts are qualitatively the same.

Der yid (albeit its a paid advertisement) can say it openly and publish it because its communicated in a haimish publication. Lubavitch can't publish its perceived holocaust because all publications are really meant for the general public and this would ostrasize. BUt, raise the topic at one hundred farbrengans and all those who attend will scream assimilation is a holocaust.

Interacting is the name of the game.

The term "Holocaust" should be set aside for the actual occurence, not for making a point. There are better ways to do it if these people are at all sincere about it. Sometimes I think that the graphics guy is laughing his sides off when admiring his work....

now its almost a semantic argument. holocaust is i think a greek word meaning totally consumed in flames or destruction. and although its used today singularly to describe the latest churban, i dont think that its wild to equate cultural coruption or assimilation with the term 'holocaust'. perhaps i could agree that an oven picture is too graphic and in bad taste....

Sprint/Nextel, the maker of the phones, pulled the ad due to a complaint from an 81-year old survivor.

Read about it here