Israeli MP Avraham Ravitz at Yechidus with the Rebbe? 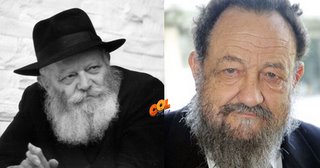 4 times no less! So said the man himself in radio interviews on Israeli radio

I was away at the time and must've missed this tidbit from COL.

1) The Rebbe tells him to grow a beard, he says the beard does nothing for him, it doesn't add nor does it diminish his Yiras Shomayim.
2) The Rebbe asks him about learning Chassidus, he says "in Chevroner Yeshivah we learn Mussar".
3) Years later when he grew a beard he told the Rebbe: "it's not because you asked me to, but rather because in the Army they made us either shave every day or let it grow, so I let mine grow!

What I find fascinating is that a man like Ravitz later became one of Degel haTorah's major attack dogs, and Lubavitch wasn't spared either to put it mildly, so what happened to him? Did he sell his soul? I guess so.

Did he sell his soul to the devil?

No! He TURNED HIS BACK ON "THE" DEVIL.

He sounds almost as bad as the character who went to the Rebbe for dollars and asked about the sukkah issue.

Just visited the Rebbe as a tourist, I guess. His response shows that he was not there to learn but rather to show off and argue.

I never quite undestood why the rebbe got upset that he person who asked him about not sleeping in the sukka.

He did so only after the rebbe himself had several times publicly told his critics that if they have any questions, rather than attack, come and ask for an explanation.
And that is exacly what this fellow did and instaed of a reply he was given a verbal bashing..

Maybe someone here can explain

Itzik:The 'character' who asked the Rebbe, was a chosheveh yid, Rabbi Kahaneh z''l, a rosh yeshiva in Eretz Yisroel who's wife I believe is a descendant of the Alter Rebbe.
Just some basic respect, if you want others to respect you

I will not mince words.

I have little respect for someone who would come to visit a leader of another community just to demean that community's minhagim. Would anyone in their right mind go all the way from NY to EY to ask Rav Ovadia Yosef why he eats rice on Pesach? And I know that his tongue can be quite sharp - he would answer such a question with an Arabic epithet pertaining to destroyed houses!

If he had been sincere (and the question is an honest and interesting one though many in EY could have answered it for him), he could have written a letter and asked for clarification.

On the other hand, when I listened to the entire interview, Avraham Ravitz just came off sounding like what he is - a politician. When he needed Chabad, he went to visit the Rebbe. Then, when Degel came to be, he was Degel all the way.

Hirshel: Just for arguments sake, let's say he was not sincere (look, I don't feel like getting into this, but bepashtus in a case of an ehrlicheh yid, there is a chiyuv to be dan lekaf zechus.What it says in Pirkei Ovos 'haveh dan ES KOL HEODOM lekaf zechus' even people who are not known to be sincere is a 'midas chassidus'.There are various opinions in the rishoinim, see the meforshim to Pirkei ovos there)
However, there are many sincere people who do have this question on Lubavitch and they should have beeen answered without getting the Reichmans vechulu involved.

is there a video clip of the dollars sukka incident?

However, there are many sincere people who do have this question on Lubavitch and they should have beeen answered without getting the Reichmans vechulu involved.
-----------------------------
Frum does not mean ehrlich. Plenty of frum menuvelach out there.

What business is it of anyone's regarding other people's minhagim? You don't want to come to our simchas beis hashoieva because we don't sleep in the sukkah?

Go ask Rav Ovadia shlita why he wears a lampshade on his head while you are at it!

Regarding that specific Rov,I once had a conversation with him and quoted a line from Likkute Sichos.Before I could give him the source,he already paskened that a sefer which says what I quoted should best be burned...

IIRC, if you watch the video, you'll see how this fellow did not simply come to gain knowledge about the Makor of a Minhag - which you'll notice the Rebbe immediatly links to the Alter Rebbe, "and if you want to say the HE couldn't learn..." - but rather he was sent by "the bnei teireh" because of "a geferliche shmua vegn shlofn in sukah..."

ps his wife was the Einayim Lamishpot's daughter or granddaughter.

According to the Oferes Le'Sreyfo, there are 80 (pay) tzaddikim without whom golus cannot continue.......

I missed that, care to elaborate?