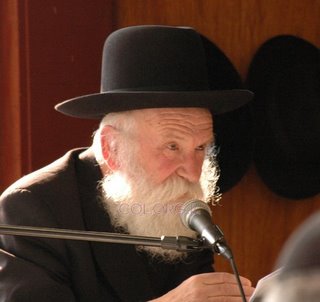 More "love" from the Yated online

3 suspects are converts to Islam

I'll just copy the notes I sent to you via email regarding "Rabbi Lawrence" and his "Trench Tool" screed:

R. Yaakov Landau, ZT"L, had a "Chabadnik son" who took over as Chief Rabbi in B'nei Braq (meaning R. Moshe Yehuda Leib). Is this supposed to mean that R' Yaakov was not a Lubavitcher Chosid? The RaShaB ZY"A would be surprised to know that!

The Degel HaTorah organization was established in 5749 (and ran in the elections a year earlier) specifically to counter Chabad's messianic campaign, which did not begin in earnest until almost three years later.

"At the founding meeting of Degel Hatorah in 5749, Maran stated: "They say that we are quarrel seekers . . ."" And, yet, there is an earlier article on the same meeting in which he says, concerning the kibbutzniks, "What makes them Jewish?"

And, somehow, heresay about a private conversation between the author, a major Askan, and R' SZ Auerbach supersedes REMMS's own words about being inadequately qualified to be a posek.

I loved the article - thanks for the link. How many other famous Rabbis need to have articles written about them years after their passing that say, in essence, 'underneath it all he really was a nice guy'. This is priceless! I also love loved the bit about the 'modaot' he took with him... :)

if learning in Tomchei Tmimim LUBAVITCH, and LIVING IN THE LUBAVITCHER REBBE'S (RASHAB) HOUSE FOR YEARS doesn't make you a Lubavitcher, then what does?!

anon, not a word of what you said is true.

Reb Ynakel Landa was not a Kopuster - he was a Lubavitcher chosid through and through. He learnt in Lubavutch and remained a chosid of the fifth Lubavitcher Rebbe (Rashab) for the rest of his life.

No one erased the fact that there were a few streams in Chabad - you can check that for yourself in all the official Chabad publications (including Hayom Yom biographical section, Igreis Admur HaRaraytz, Yemei Chabad calendar, etc, etc, etc).

Bobruisk was not a separate ‘stream’ – it was part of Kopuster branch, as was Rechitza. In addition to Lubavitch, there was Kopust, Liadi and Nezhin. (There was one another son of Tzemach Tzedek that became an Admur, but not in Chabad derech).

All of these facts are well published and known to all that have interest in such matters.

Reb Yaakov Landau was a real Lubavitcher who was a ben bayis by the Rasha'b and upon whose testimony and writings Lubavitchers know the halachik rulings regarding mikvehs of the Rasha'b, since R'Landau was the one who supervised the building of such a mikva for Rash'ab.
It is true that there was some tension later between Rabbi Landau and Lubavitch .It is also true that Rav Landaus sons attended Ponovitch, but at the time it was not unusual at all.Rav Landaus son in law Rabbi Kroll was also a Ponovitcher talmid.
Shneour a reliable poster will be able to add many more details about R'Landau since he was a landsman of his father in Kurnitz(I think)I do not know if R'Landau was a born Lubavitcher or became one when attending Tomchei Temimim.
(His sons Moshe yehuda leib and Eliyohu do not have 'classic' Lubavitcher names and neither is his name Yaakov one, but obviously that does not prove anything)

Hmmm....seems that R. Moshe Tendler was not at the CGI yarchei kallah this year, after having been a regular for years. Seems they may have used him for many years, but now dumped him when it was convenient for them ? Or is he in EY or something ?

The son who became a Chagas Rebbe was R' Yosef Yitzchok of Avrutch, the maternal grandfather of the Frieridker Rebbe(Hence the name Yosef Yitzchok). Actually, Tzig, wouldn't it be nice if you made a series on the different branches of Chabad Chassidus (Which includes the Avrutcher, although he wasn't a Chabad Rebbe per se.)