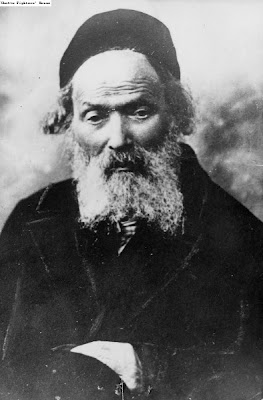 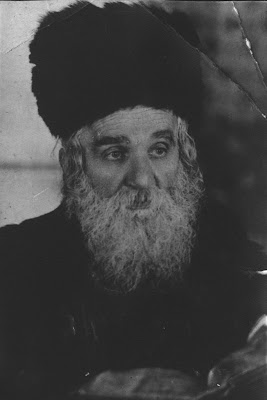 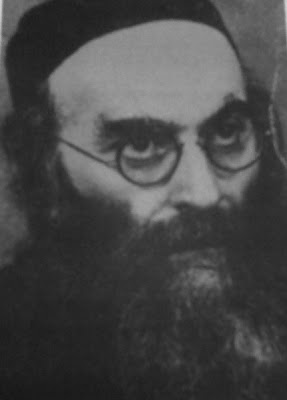 Except the first is NOT the Chafetz Chaim. As per his duaghter. Rumor has it that it is the Shochet of Radin.

Shochet? I dodn't know... This is an authentic picture of R"YM Kagan:

Wondering how authentic are these pics:

The picture that is posted by Shimon's link looks VERY much like the one I posted. I heard that in his daughter's name as well, but I'm not sure that's true.

The chafatz chaims daughter is known to have said that its not her father. I personley heard from someone who saw the chafatz chaim that this picture is incorrect. There is a differant true photo of him sitting in front of his house. The famous picture is actualy the shochet of radin. Rumor has it that the agudah asked for a picture of the chofatz chaim for there records and the shochet had a cousin working in the agudah office so he dicided to send a picture of himself to his cousin. When the letter arrived and they saw it was from radin they assumed it was the chofatz chaim.

While you have the Shoproner's picture posted, could you tell us what his relationship was the the Lubavitcher Rebbe. I know that he once had a very high opinion of the Rebbe. Don't know if that withstood the Rebbe's meeting with Shazae.

HT,
pardon my am haratzus, who is הגאון מהרש"ם מבערזאן זצ"ל - רבי שלום מרדכי הכהן שוואדראן
and how is he related to the famous darshan who passed several years ago.

The Berzhaner Rov was in the eyes of many the "Posek HaDor." He was the author of the Tshuves Daas Torah and T'cheyles Mordechai al HaTorah.

The people that disqualify this picture never saw the Chafetz Chaim when he was that age. I happen to know some one who has a copy of the newspaper in Poland at the time that reported his petira and that picture is there. How can you refute that?

Mori V'Rabi Harav Baruch Abaranok z"tl saw the Chafetz Chayim. He learned in Radin and got Smicha from him. He told me that it was definitely not the Chafetz Chaim.

He had that picture of the Chafetz Chaim on his wall as given to him by a Talmid. In order not to upset the Talmid, he kept it on the wall even though he knew it not to be the Chafetz Chayim.

I also sat next to an old ex-Gerrer Chasid who passed away just before his 100th birthday and he had seen the Chafetz Chaim in Radin and he too advised that it wasn't him. He recalled that the Chafetz Chayim was tiny, and to get through the throng of people, they hoisted him on a chair and passed him along over people's heads! He had a great memory, even teaching me a Nigun from the Trisker Magid, the name of the Gabbai from the Geneivisher Shtiebel in Warsaw, but I digress.

Reb Shulem is a straight grandson of the Marsham and he printed the Daas Torah on Orach Chaim , where he added beautiful footnotes, but his mamorim on haskofa is totally off the wall in that sefer, it is definitely not his zeidas style, he was a chasidisher Yid, chossid of the first Belzer Rov etc..

Hirshel,
the name of his teshuvas is Marsham and his sefer on Yoreh Deiha is Daas Torah,he was considered Posek hador by every one, eventough they considered him a strong Miekel,

What I heard in yeshiva was that the Chofetz Chaim didn't want a picture of himself for public consumption so when they sent a photographer he said "over there is an ehrliche yid, take his picture". That this yid was the shochet I never heard.

tzig y dont u link the petition 4 smr from matazv.com

"The picture that is posted by Shimon's link looks VERY much like the one I posted. I heard that in his daughter's name as well, but I'm not sure that's true."

Because the CC's grandson told me personally that his mother (the CC's daughter) said that it is not and could not ne her father. While it is true that by the time she meet her father, he was older, she was adamant that it was impossible that it was ever her father. Also, if it was taken fifth years before, do you think it was hidden until then? Why should she never have seen it if it was her father.

Did the Shoproner rov, always have a full non trimmed beard?
when did he become a chossid? as a Bochur? as a Avriech?he was original from Yekkisher background,I think he had secular studies on his resume?

do u have the picture of shlomo carlebach with the rebbe?

The Shoproner Rov had a PhD before he saw the light in Munkacs. I'm not 1000% sure, but I'd bet he had a kometz berdel, if any, at that time.

We had the picture of SC with the Rebbe way back when.

Here's one of them. There's one where he leans over and whispers to the Rebbe.

The link below, is a PDF article, written by R' Peretz Bloi (Chabad R' Tuvye Bloi's son). The goal of the article, [interesting as he makes it - v'dal], is to explain how the Rebbe says he got the letter on Shabbos, and that it was thru a mittelman.
BUT, bein hashuros, he writes of the Rebbe's yachas with him. (Esp. the igros which he "fills in" the Shoproner's name; AND see last page, re leshonos the Rebbe writes on him).