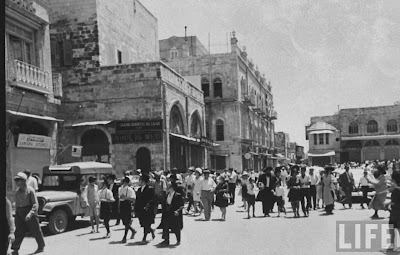 I havn't received a letter from you............. I am carrying on learning as normal. On the eighth of Chanuka I went to watch Hadlokos Nerus at the Gerer Rebbe Shlita. Many Chasidim and others were present and the pressure was tremendous. The same evening around midnight I went to R' Ahrele's Chassidim where there a great ceremony on this night. Firstly they lay out a table and distribute Shirayim. This takes about two hours since they have a principle not to do any item of Avodah in a hurry; all must be done with insight and deliberation. After that they assembled all the wicks and oil left over from previous days, together with some other items and placed them on a large metal tray in the middle of the BHM"D. The Rebbe with tremendous fervour set it all afire to the accompaniment of Psukim such as Vechol Horisho Keoshon Tichleh. This was followed by Rekida after Rekida, to their well known main Niggun. Due to weariness, since it was already after three, I did not stay to the end of the proceedings. As you know, following your instructions, I learn one Possuk of Torah in great depth each day. I have now reached Sh'mos 21:1 and am unsatisfied with the commentaries I have seen. Please have a look and tell me of you have any suggestions.

Since a long time ago there have been in Jerusalem numbers of missionary societies. They labour intensively mainly trying to convert new immigrants to Christianity. Anyone who comes under their umbrella receives many financial benefits including tickets for trips abroad. They are recognized by the Misrad Hadatot, to avoid enmity....... Last night a report was received that in a few hours time they are going to convert fifty-four people. Such mass conversions are kept secret, but this time one candidate backed out at the last moment and spread the news. There was an emergency gathering there of several hundred Yeshivah Bachurim and others. A few broke into the house, broke windows and cut of the electricity. However, the police soon arrived in great numbers with dogs and started fighting and beating up people with sticks. The police are mostly low intelligence immigrants from .............................. The screaming and shouts of "Gestapo" enraged the dogs even further and the chase carried on all down Rehov Meah Shearim. By then it was already ten at night and the commotion aroused all the courtyards of Meah Shearim. Men and women came out of the tenements and when they saw the police assumed that had come to round up girls for National Service. The screaming intensified. The police arrested many males including four Bachurim from Chevron. They were today released on bail. How painful it is to see a Jewish State arresting Jews for hindering Jews who want to apostatize. May Hashem have mercy.

On the topic of National Service which is due to be enacted soon people are saying Tehillim and more. Asoroh BeTeves has been declared an additional prayer day. Re: your suggestion that I should have regular lessons in Ivrit; I have some difficulties. There simply is no time. In the Yeshivah it is customary to speak only in Yiddish in public. In my room all understand and speak English, so there is little opportunity. Nevertheless, I have learned something whilst shopping and visiting offices. ........ On reading about [Dr] Altman [Communal Rav in Manchester] I admit to a degree of sympathy. On the one hand the Higher Broughton activists want to put him in Cherem and the Jewish Chronicle lambasts him for his absence at the opening of the Reform Synagogue.

Eight years after the Holocaust, people were already yelling "Gestapo" at Israeli cops?
I guess אין חדש תחת השמש applies here.
The second point which I found intersting was his claimed that no one in Chevron spoke Ivrit in the street. I would like to see that verified.

Mul haeynam,
What it said was :"In the Yeshivah it is customary to speak only in Yiddish in public. "
What he meant was that the shiurim were given in yiddish.
"

The first recorded instance of one MK calling another MK a nazi was in 1948....

The Poilisher Snag of London

i am shocked, tzig, that you gloss over the whole tropper affair as if nothing happened.... why are you so silent about this???? what is your opinion about this??? the oylem is dying to find out. bifrat az s'handelt zekh vegn an ekhter misnaged.

And I congratulate you tzig for staying away from that shmutz. Leave it to the snags to gloat or defend. Hamis'apek im menuval misnabel!

"And I congratulate you tzig for staying away from that shmutz. Leave it to the snags to gloat or defend. "

The "Failed" and "UO" blogs are all over that story like flies on .... Let them have their fun.