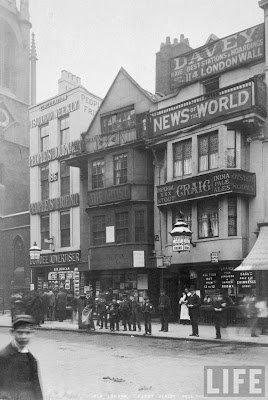 London's East End at the turn of the 20th century

"Decorum was not a feature of synagogue worship in those days, nor was the Almighty yet conceived as the holder of formal receptions once a week. Worshipers did not pray with bated breath, as if afraid that the deity would overhear them. They were at ease in Zion. They passed the snuff-boxes and remarks about the weather. The opportunities of skipping afforded by a too exuberant liturgy promoted conversation, and even stocks were discussed in the terrible longueurs induced by the meaningless ministerial repetition of prayers already said by the congregation, or by the official recitations of catalogues of purchased benedictions. Sometimes, of course, this announcement of the offertory was interesting, especially when there was sensational competition. The great people bade in guineas for the privilege of rolling up the Scroll of the Law or drawing the Curtain of the Ark, or saying a particular Kaddish if they were mourners, and then thrills of reverence went round the congregation. The social hierarchy was to some extent graduated by synagogal contributions, and whoever could afford only a little offering had it announced as a "gift"—a vague term which might equally be the covering of a reticent munificence. Very few persons, "called up" to the reading of the Law, escaped at the cost they had intended, for one is easily led on by an insinuative official incapable of taking low views of the donor's generosity and a little deaf. The moment prior to the declaration of the amount was quite exciting for the audience.

On Sabbaths and festivals the authorities could not write down these sums, for writing is work and work is forbidden; even to write them in the book and volume of their brain would have been to charge their memories with an illegitimate if not an impossible burden. Parchment books on a peculiar system with holes in the pages and laces to go through the holes solved the
problem of bookkeeping without pen and ink. It is possible that many of the worshipers were tempted to give beyond their means for fear of losing the esteem of the Shammos or Beadle, a potent personage only next in influence to the President whose overcoat he obsequiously removed on the greater man's annual visit to the synagogue. The Beadle's eye was all over the Shool at once, and he could settle an altercation about seats without missing a single response. His automatic amens resounded magnificently through the synagogue, at once a stimulus and a rebuke. It was probably as a concession to him that poor men, who were neither seat-holders nor wearers of chimney-pot hats, were penned within an iron enclosure near the door of the building and ranged on backless benches, and it says much for the authority of the Shammos that not even the Schnorrer contested it. Prayers were shouted rapidly by the congregation, and elaborately sung by the Chazan. The minister was Vox et praeterea nihil. (A voice and nothing more; a mere sound; hence, fine words without weight or meaning) He was the only musical instrument permitted, and on him devolved the whole onus of making the service attractive. He succeeded. He was helped by the sociability of the gathering—for the Synagogue was virtually a Jewish Club, the focus of the sectarian life."

I like the photo, but not so much as an honorable mention?!

SORRY, ELI
Eli was the one who sent me the excerpt.

a search for East End found this picture. Is Fleet Street on the West End?

I don't find this nearly as funny as I probably should because I used to spend most of the muttar-to-talk parts of davening begging the guy next to me to shut his mouth during the rest of it. He claims that 'shul is a social place and always has been and not talking is a new idiocy the rabbis made up for their own kavod" he won't get that some of us follow shulchan aruch as opposed to "tradition"