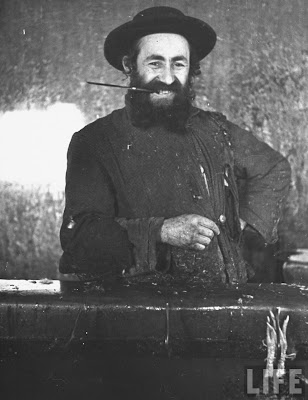 אין בור ירא חטא ולא עם הארץ חסיד; they say in the name of RMBW, that a boor cannot be a G-d fearing Jew, which is simple, since he never learned he cannot know how to conduct himself daily. He also cannot be an Am Ho'Oretz, since even an ignoramus would wake up early in the morning and go to shul, say tehillim in his spare time and fill his time with good deeds and such. What can he be? חסיד! only a chossid can do nothing of the sort, no learning, no davenin, and no yiras shomayim..... What's ironic is that I heard it being repeated by a very proud Satmar Chossid. The Hungarians can be like that sometimes, they can put down chassidus like that despite themselves falling into that category. Reb Michoel Ber was like that, never caving in to the Chassidic influence of the day. He liked certain Rebbes, like the Satmar Rov, but that was it, he was a fierce defender of the Ashkenaz, z"l. I wonder what he would've said to his yeshivah and talmidim had he lived another 35 years.
Posted by Hirshel Tzig - הירשל ציג at 11:46 PM

if Lubavitch today can be considered Hasidim , then nitra tody can be called oberlander

RMBW was disappointed with his failed yeshiva settlement project already in his days.

BTW I know many alte oberlanders who had similar views on chassidus. Yet almost all their shidduchim were with Satmers.

After the war most frum oberlanderes allied with Satmer and other chassidim. The litvak were too frei for them and the chassidim were the lesser of the two evils.

I believe that today the situation would be diffenent.

What is "shein" about that?

thanks for the great vortb tzig,
i never heard that one before. zayer shein!

Sholom,
Something similar and a rebuttal in printed in Toldos Levi Yitzchak...

Yerida,
this gevaldig vort is yours? or R MBW? or Yankel Miller?

Sholom
Since we are up to the Chasidishe Ganovim? I would like to know,what is Weinstien of Lakewood? does he wear a Shrtimel? I didn't see his yet, 1 think I realized that he milked big time the Berger's of London chasidic family for generation, I guess Berger got suckered in the belief that Lakewood guys are straight shooters. Let him eat it

He was also a big Chosid of Reb Aron of Belz, as you can see in many of his letters.

Snagville
What so great about them? I knew a lot of them personally, they were not as straight as you think, they were very arrogant that they are not DreiKops, but there business life wasn't so pure, they were not in the face neither as chasidim but the tactics were the same.

Your blog keeps getting better and better! Your older articles are not as good as newer ones you have a lot more creativity and originality now keep it up!

Ziggele,could you explain to me what was the difference [if there was one] between reb Michoel Ber z'l and for instace the satmer rav z'l,they both had the exact same hashkofos in yidishkeit,the same derech halimud,both wore chasidishe lvush [except the shtreimel on shabbos]
or better yet,what was the diference between the old satmar rav z'l or harav Eliashev shlita or harav Kanievsky?
by th way i am a talmid of RMBW z'l
CHAIM

Chassidis (i.e. Satmer, Neitra, Pupa etc.) is much better for the Rabonim's personal gain (business). They have much more power, a more captive audience, more chance that their children will stay loyal customers and guaranteed jobs for all the Rabonim's offspring etc. That's why the change in that direction.

Browser
the difference is simple,
the Satmar rov was against all Rebbes and Rebisteves but he believed that he was still left from the old school, he still had the full right to take Kvitlech, Daven after Chatzois,distribute Sheraim, all the accessories and perks that comes with real rebbes of yesteryesr like the Shinever Rov, But Rav Weissmandel held that chassidus doesn't exist for him and for nobody else,
so its a minor difference

Lieb,
If Pupa Nitra Duschinsky were not rebisteves,they wouldn't exist,
for instance Duscinsky, reb Yosef Tzvi, was a real Marbitz Torah gave 3 shiurim on a daily basis Gemorah,Shulchan Orach, Nach and wrote beautiful Teshuvoth, his offsprings are 2nd generation simple fund raisers, they are nice people to be your neighbor but this is it where it ends,in a real Rabonas they would not tolerate it,and the same is with all the others...

I guess to comment in a intellegent manner, one needs to know the Orthodox community of greater Hungary before 1944 in a personal manner, which I do not People have told em that there was a real difference between Hungarian chassidim and Galitzianer chassidm before the War. perhpas the chasidim in Marmorash and Carpatho-Russia were more like their Galitzianer brothers..

Schneur,
The town of Munkatch was total under the spell of Galicia, the Rov was Reb Hersh Mielech of Dinev, and then his family were the Rabonim there till WW11,with a short period Rov Reb Chaim Sofer of Pest, he had to leave since the chasidim disliked him, their were big a Zidichover presence their all the time, Belz had a huge Kehila, the Rosh Beis din Shlisel was a galitzianer.

"with a short period Rov Reb Chaim Sofer of Pest, he had to leave since the chasidim disliked him,"

More info about this please!

My accomplice and I actually loved reading this weblog publish, I used to be simply itching to know do you trade featured posts? I am all the time trying to find someone to make trades with and merely thought I might ask.