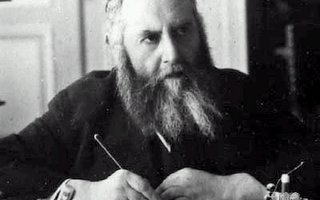 Lots of historical footage, including some of the October revolution.

I still contend that Russian is a vile-sounding language, suitable for the millions of peasants who spoke and speak it. The Royal family themselves spoke French! That should count for something. I would hope one of our many Russian-speaking readers would do us all a favor and translate some of the film for us.

I'd also like to hear what you people think about the level of directing that happens here. Is it overdone?
Posted by Hirshel Tzig - הירשל ציג at 8:31 PM

The film is kinda amateur, It's probably meant to be so, after all it's not Ushpizin. Also, why couldn't they make the "FR" (Izhak Kogan) more realistic, like get a bent-up hat, make him wear a vest and wear his Tallis Koton on toop of his shirt like he did in real life?

To me Russian sounds a million times more regal than the slushy sound of Polish or the horrid sounds of German.

than German, the predecesor of Yiddish? c'mon! You must be confusing common-man German with those rousing Hitler speeches. On Polish you may have a point, it sounds like dragging fingernails on a chalkboard.

maybe the revisionists are trying to tell the world that Lubavitch always used a modern code of dress, with even the Rabbeyim themselves?

Polish is spoken with broken "L" and a stuffed nose.
Russian is by far the best of the Slavic languages -and while the Royal family spoke may have spoken French, our Royal Family used Russian as well.

so maybe it is the best of the Slavics, but does that make it pleasant?

I knew I'd get slack about the Rabbeyim speaking Russian, albeit sporadically, but what does that prove? what else should they speak, they were Russian!

There were many things that they b'davka said in Russian, songs etc.
Our Yiddish is full of Russian words.
Perhaps I've just grown used to Russian by dent of living around those who speak it most of my life, esp. the last few months.