What it is it about the שלאס Mem? 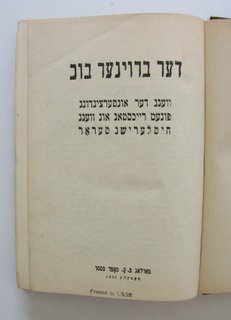 Or the Lange Nun, Lange Tzaddik, and Lange Chof for that matter.
Why did the Commies in the Soviet Union decide to do away with those letters?
There must be some inherent concept in those letters that they wanted to eradicate.

What could it be? Any Suggestions Khaveyrim?

Why would the Commies hold on to the Yiddish language at all, wouldn't speaking Russian, the mother tongue, be seen as more patriotic?

Why is the Arbeiter Ring aka Workmens' Circle the one perpetuating Yiddish amongst the irreligious Commies? 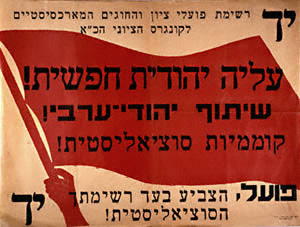 Why would a Jew want to be a Marxist if he's a Zionist that believes that Eretz Yisroel was promised to him in the Teyreh? I thought those Commies never wanted to make Aliyah. Did they believe that they could create a complete Commie state in the Holy Land?
Posted by Hirshel Tzig - הירשל ציג at 2:54 PM

it was cheaper and more efficient to keep the letters to a minimum.

how does putting a Mem in place of a Shloss Mem make it more efficient?

less letters...
This is also more goyish (all this 'final' letter stuff is so hebraic & Jew-only

perhaps because final letters are from the torah?
It could also have been a way to get changes in the door. Change something that seems innocuous so people won't protest, and then, once you've got your foot in the door, you can change other stuff.

why not send an email to one of the old Bundists over @ the Arbeiter Ring in the City?

Re the arebeter ring - you are mixing up socialists with communists. That's like mixing up (lihavdil) Lubavitcher and Karliner Chassidim - even though there is some similarity, they are not the same.

"Why would the Commies hold on to the Yiddish language at all, wouldn't speaking Russian, the mother tongue, be seen as more patriotic?"

The commies also got rid of all Hebrew spellings. They would sing songs about their hero כאַווער סטאַלין.

read the poster, they mention Marxism and Socialism, with the idea being Marxist and the party Socialist.

You think old Bundists have email?

Although there was definitely an ideological (anti-religious/Zionist) purpose to the elimination of final letters and Hebrew words, the real reason, believe it or not, was efficiency. The Communists wanted to make the alphabet smaller. They would then be able to save on printing costs. They did the same for Russian by the way -- they created hundreds of acronyms to save print-type. The story is told of a Russian who kept on staring at the sign over the door, "Vyched" ("EXIT"). He was trying to figure out what it stood for, until he realized that it meant exit!

Communist China did the same thing, by the way.

Several months ago, at YIVO, I came across an anarchist proto-zine from 1930s Vilna. It had been printed to commemorate the fifth Yohrtzeit of Sacco & Vanzetti. One thing which I noticed was that the spelling of words of Hebrew and Aramaic origin had been Yiddishized.
It would appear that the commies' anti-religious sentiment had a higher priority than their frugality, as the Yiddishized spelling requires more letters.

I have also noticed seen in some recent newspaper ads from the arbiter ring that Chanuka spelled "khanekeh", they seem to be following the Soviet style yiddish today.

The KH in place of the CH has always been their trademark. I speak here of the Yiddish changes they instituted.

montzpach (the acronym for sofet letters)
according to the medresh are the sod of geulah.Utopia.

Hey Tzig, are you going to the metropolitan opera Sunday night ?

Might be a good idea, chill out a little with Reb Itche Meir.

I was there last year, But on someone else's dime. I do want to go this year, but I Kratzed around and have yet to get tickets. Got any left over?

The Yiddishized spelling is actually more effecient, because then, they wouldn't have to make as many types of letters (Tof, ches, etc.)

I know that the Russian Yiddishisten where so vehemently anti Frumkeit that disassociated themselves from any form of Hebrew because Hebrew was the language of the Torah. Many of them were also ant Zionist. One example I could think of is a newspaper that they ran in the early nineteen hundreds, called “EMES” they spelled it eiyin mem eiyin samech, as appose to the way it’s spelled in Hebrew.
Perhaps the lang’e mem etc. had some Hebraic connotations which is the language of the Torah…

The reason is pretty simple if you know history enough. Communists (as well as Zionists by the way) made all matters of language the field of ideology. Therefore they marked some languages as "bourgea" (anti-red-revolutionary) and some as "proletarist" (red-revolutonary). (This whole idea is horrifically absurd and evil). It happened, that Yiddish fell in the first category, and Loshn Koydesh (and Zionistic Hebrew as well) in the second. According to "party line" (in the early stages of USSR), all bourgea languages had to be exterminated, while only proletarist languages could remain. (For Zionists for example exactly the opposite happened with the same evil idea. All languages were marked "galut" or "zionistic", and "galut" languages were ought to be exterminated).

But even this was not enough for the red chiefs. They decided, that communistic Yiddish have to be different from Yiddish used by "capitalists" outside USSR. So Yiddish orthography was changed. It fit well with their desire to get rid of Loshn Koydesh, so words from Loshn Koydesh in communist Yiddish orthography became spelled differently (phonetically). So Shloss Mem, Langer Nun etc. a just a part of all this.

In later stages of USSR (it started in the end if 1930-s) the even Yiddish came under attack. This time not as a bourgea, but simply like too nationalistic. So red chiefs made one more step for destruction of any signs of Yiddishkayt, and Russian became a standard for all. So Yiddish was majorly destroyed in Russia (for younger generations).

1. 1917 - communists came to power. Red terror reins.
2. mid 1920-s - almost all chadorim and yeshivoys are destroyed. Communist schools in Yiddish opened.
3. End of 1930-s - most of the Yiddish schools closed ("by the will of parents") because of anti nationalistic compain.
4. 1941 - 1945 many Yidden killed, weakend by communists kehiloys wiped out.
5. After the war - nothing was done to restore Yiddish schools (kol shekeyn, chadorim - out of question). Yiddishkayt was suppressed on all levels. Memory about Yiddn had to be blotted out.
6. End of 1980 - first yeshivoys open up. But exceptionally few teach Yiddish. But no chadorim in Yiddish (known to me at least) were created at all.