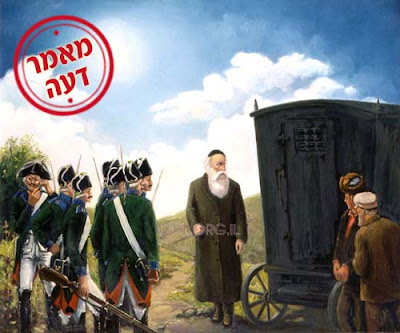 I just finished my Yud Tes Kislev Seudah with my Mishpoche. We set the table like Shabbos, lit two candles, without a Brochoh of course, and had a festive meal, Baked chicken and Orzo, complete with L'chaim (Carmel Young) and desert, brownies. We figured that despite the fact that the kids were taught all about the Chag HaChagim at school, that they need see it "observed" at home as well, and in a family setting, showing the importance of the day. I can see some of you jumping out of your seats already, quoting irrelevant gemoros about how adding yomim tovim is assur. Somehow you'll convince yourself that it's a concoction of the last Chabad generation, and that if Rabbonim and Geonim got along fine with Nesiei Chabad then, then it must be that Chabad did something to change it. Well, my friends, it seems like Yud Tes Kislev as been watered down some after WW2, in the old days it was more of a big deal than it is today. Imagine that! I once heard from Reb Avrohom Aron Rubashkin that in Nevel - his hometown - there was no cheder on Yud Tes Kislev, today all Chabad chadorim have school. אכשיר דרא.

You might ask what is it about this day that Lubavitchers - and many non-Chabad chassidim - make such a big deal of it. You might say that it's the אור וחיות נפשנו ניתן לנו that the Rebbe Rashab refers to that injects that holy light on this auspicious day. Contrary to what many of you may think little is made of the Misnagdic aspect of the story, other than when telling the actual story. This is not a Didan Notzach over Misnagdim, but rather a day of Hachlotos Tovos, a day when the Chassidishe Neshomoh enters one's Guf in an internal way, and when the koach is given מלמעלה to learn and understand chassidus and to follow in its ways. For me these last 2 days have been a Yom Tov in Der Vochen. Days where you can sit on a regular Tuesday, after a day's work, and sit BeDibuk Chaverim listening to vareme verter from a mashpia and singing vareme nigunim. You leave the farbrengen at 3am and you've been transformed to another world, a world where there's only good. At least for a short while you live off those Hachlotos Tovos that you made, until the time comes to recharge the batteries.
Posted by Hirshel Tzig - הירשל ציג at 6:59 PM

tou left out tha chof kislev is the biiger choga because the baal hatanya got out of the minageds house which was worse then jail.

I didn't leave it out. I just didn't mention it.

why dont you post a link to 770live.com so we can watch the oilam in 770 bedecked still in tallis and tefillin?

that was then, is it still the case? VeDal...

hirshel,
you are the etzem and mahus of a chillul lubavitch for allowing the above comments to get through. are you really so desperate for hits and comments to shamefully denigrate chassidus like this?

R' Chaim Brisker told it to the people in Brisk who had taanos when the letter of the Rebbe Rashab was printed with the RH declaration.

Tzig
I think the Rebbe Rashab brought back life into Yud Tes Kislev with his famous Letter,

nobody said it was bigger than LB. But the fact is that LaG BaOmer has become a yomtiv about bonfires and Chalakes, at least for the masses.

Hirshele
What you did will impress the importance of YT Kislev on your children, more than all the stories they heard in Cheder.
U'mimenu Yilmedu v'chen ya'asu

I just finished my Yud Tes Kislev Seudah with my Mishpoche, and quickly ran to my blog to write about it.
2 great mitzvos on such a holy day. I feel so much better now.
My kids will now understand how good lubavitchers properly "observe" this holiest of days. Mamash like yom tov.

actually it took me from 6 pm yesterday to 2 pm today to finish it, so there, you hater.

What did he mean By Unz Felt? LGaryusa?

Tzig, I'm somewhat surprised by the poor quality of comments here. They seem so short and poorly written . . . and whats with the plethora of Anonymous posters?
I myself chipped in with somefriends, bought a few rolls, chicken and l'chaim, and sat in an ofen fun sheves achim gam yachad - twas great.
Did you sing the yud tes kislev'diker Shoshanas Ya'akov?

Josh
as you were refered in an earlier post,its all mevoar at length in Avi Ezri Hilcos Rotzeach

According to the Chasm Sofer that was against the Lag Beomer Chagigos, since its a Yom Shemais Rashbi. there is a bigger inyan Yut Tes Kislev since its a day of nissim for your rebbe, just a tought,

According to the Chasm Sofer that was against the Lag Beomer Chagigos, since its a Yom Shemais Rashbi. there is a bigger inyan Yut Tes Kislev since its a day of nissim for your rebbe, just a tought,

Avi Ezri is probably over the heads of almost everyone who reads this blog. Its nice to be so charitable, but come on!

It was a joke, but seriously speaking, even a litvishe yeshiva bachur can manage avi ezri on a good day (I'm talking about the top bachurim only) and on average a lubavitcher yeshiva produces smaller עם הארצים than a litvishe one.

When I was in ישיבה we all gave nice Chaburos on Avi Ezri. This was 12th grade and נר is not the "best" yeshiva either. I am no Lubavitcher, but it is far from the hardest ספר out there.

"R' Chaim Brisker told it to the people in Brisk who had taanos when the letter of the Rebbe Rashab was printed with the RH declaration."

Next thing you have to worry about is all the brochos levatolo over the nonsensical candelabras you put up in der gass.

If you lot seriously learnt the Rambam (instead of just trying to subvert a few bits of Hilchos Melochim) you would know that the Rambam holds that making a brocho levatolo is oyver Lo Siso Es Shem H' Elokecho Lashov.

Still, it's only the Aseres Hadibros.

hey! look what the wind blew in! it's Jacob Cohen!

Is Lo Tirtzoch also part of the Aseres HaDibros, Jacob?!

Is the soldier on the far-lft yakking away on a cell phone?

i dont know who is jacob cohen but from his tone i can see he is a guy that one should not answer directly because " kol hamisavek im hamenuvol misnavel. he probably never heard of of sdei chemed or the kolbo. but for those that have heard of them one can see in sof maareches chanuka and in many tchuvos ( 1 example mishne sochir ) that one can make a brocho on public menoras and one is mezake es horabim. just to quote a letter from hagoon hatzadik r"sh Mashash - " בענין נרות חנובה שעודין חבד ברחובה של עיר באמריקה וגם כאן בארץ ישראל ומתקבץ עם רב ואני מוזמן על ידם להדליק ... אני מדליק עם ברכה ואני אומר ...שכל מי שאין לו חנוכי' בביתו שיכון לצאת בברכתי
he goes on to say that according to the svoro of the Beis Yosef there is even more reason to make a brocho on public menorah lighting berov am than in shul.
a rachmonos on jacob cohen- farbisnkeit alein af tzvey fis

behemshech to what i said before - i know that the minchas yitzchok poskened not to make the brocho on public menmoiros. apart from the fact that in halocho there could be be legitemate chilukei deos, one should look in the tens of tshuves where he mentions hagoon hatzadik milubavitch shlita to bring him as a rays for his psokim in hilchos shabbos, mikvoos etc etc . he certainly never mezalzel with the etzem inyan of public menoiros and definitely would not approve jacob cohens diveri chutzpo. but then misnagdim dont really respect any gedoiley yisroel and only quote them to suit their purpose. they will follow r shach in his sino to chabad but will use electric shavers which he asered as issur deoraise. they would shave relying on reb moishe who was livid when the rebbe was put down.
thats toyre??

Good try there. So why don't you call it the Chanukah of Chassidus then?

Limayseh you call it chag hageulah, which is like Chanukah and Purim, not Rosh Hashono.

Okay, there you go, so there is a Purim connection there !

Reb Chaim Eyzer made the remarks concerning YAT Kislev that they add yamim teyvim and by us we subtract Yamim Teyvim when confronted by Mitnagdim. This is reported by Rabbi Leib Zalmanow and was publicized in many places. Has anyone out there attended the Yat Kislev program in Wiliamsburg at Nesives Eylem?

I thought an integral part of the celebration of Yud Tes Kislev included eating kasha and singing Pada b'shalom nafshi. Anyway, that how we do it.

Schneur, are you sure about Reb Chaim Ozer ? I'm fairly certain I've seen in print that it was Reb Chayim Brisker.