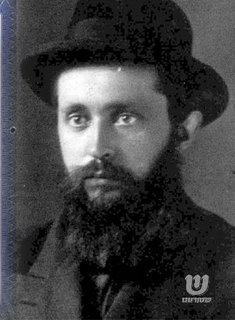 13 Years since his passing.

I remember learning in Eretz Yisroel at the time and opening the Kfar Chabad magazine the following Friday, reading about his passing came as a shock. 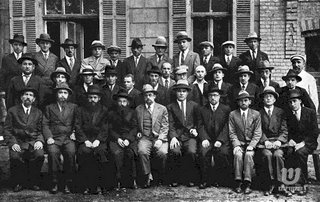 (in Riga seated second from left)


I never was involved in the Shlichus system so I never had reason to "complain" about him. I saw him as an awe-inspiring (sorry if that's over the top) figure who was always at his side and yet completely בטל to the Rebbe.

An anectode worth telling is when he once fainted in 770 the thing that worried him when he was revived was not his own well-being, but rather Halochoh. His words were "אפשר זאלען די כהנים ארויסגיין?" 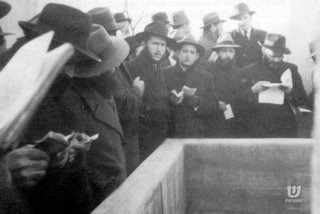 Some of his early writings were published in the Orthodox journal "Der Shabbos" in Riga in the late 20's and 30's, and were reprinted by KeHoT in 5740. 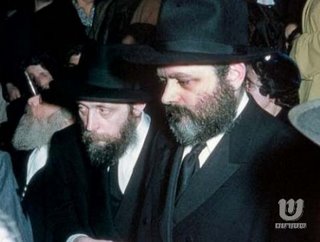 It seems like some farmer from Crown Heights has sent me a message comparing R' Chodakov to Chaim Ber the Tzemach Tzedek's meshamesh or other Gaboyim. He couldn't be more hopelessly wrong.

Why losers would have such hatred for the man is beyond me, but it's a fact. Goes with the territory, I guess.

if you want to continue this conversation at least send me an e-mail address!

I think there is an advantage to "Chodakov-bashing". I am not in your world enough to know what Lubavitchers have against him, but I know one thing. Many (not all)Lubavitchers have a very hard time dealing with any criticism of their movement. They call it "bashing" or "being a sonei Lubavitch" even when it really isn't. I have seen the phenomenon. (Please oh please don't argue with me on this point. It will totally ruin your credibility.) And of course it's totally verboten to criticise the Rebbe. I totally understand that.

So how does a Chossid who wishes to stay in the good graces of his fellow chassidim effectively criticise without getting into trouble? Criticising Chodakov (or Krinsky or whomever) is the obvious solution. It is the perfect outlet. I don't know if I would plug that hole. It might be a healthy venue to help correct those elements that need correcting.

you're right on about the solution to criticizing the Rebbe. Avrohom Pariz said that Chodakov is the man for that. This fool blames Chodakov "for not keeping the Rebbe from turning Lubavitch into a laughing stock"! that's another matter altogether.

I'm the 'fool' who blamed Chodakov from not holding the Rebbe back from turning Lubavitch into a laughing stock.You are the 'hungarisheh na'ar' that does not see how silly Chabad is seen by the world.Haven't you been to 770 for a keis shel brocho from the Rebbe shlit'a?Did you not read the news stories of the people who were arrested for protesting the terrible 'avlah' of writing zatsal on a marble stone outside 770.Btw, despite having 24 hour a day guards at a heavy expense the meshichsts managed to break the stone.Yeah you guys are not a laughing stock!Boy they really brainwashed your Hungarian head.

I wonder how things would look in 770 if Hodakovs had survived the rebbe in good health.
I would appreciate some comments etc

that's tough to asess, being that he wasn't around, but one thing is for sure, the idiocy would not have gotten off the ground. The same could be said for Yankel Hecht, he would've never allowed the total breakdown in CH.

Hodakov? Nothing would be different. People do what they want to do (or what is in their interest) and the ideology is created later to fit/buttress their actions. No Hodakov or Hecht could stop this any more than they could change human nature or bring peace on Earth. If Hodakov would stand in someone's way, they would simply declare him a nifrod vos halt a milchomoh geluyoh ankegen dem Reb'n.

What would have happened in 1994 if the Rashag were still alive and well. Would some have made him the leader ?