"Do what your Zeide says to do" 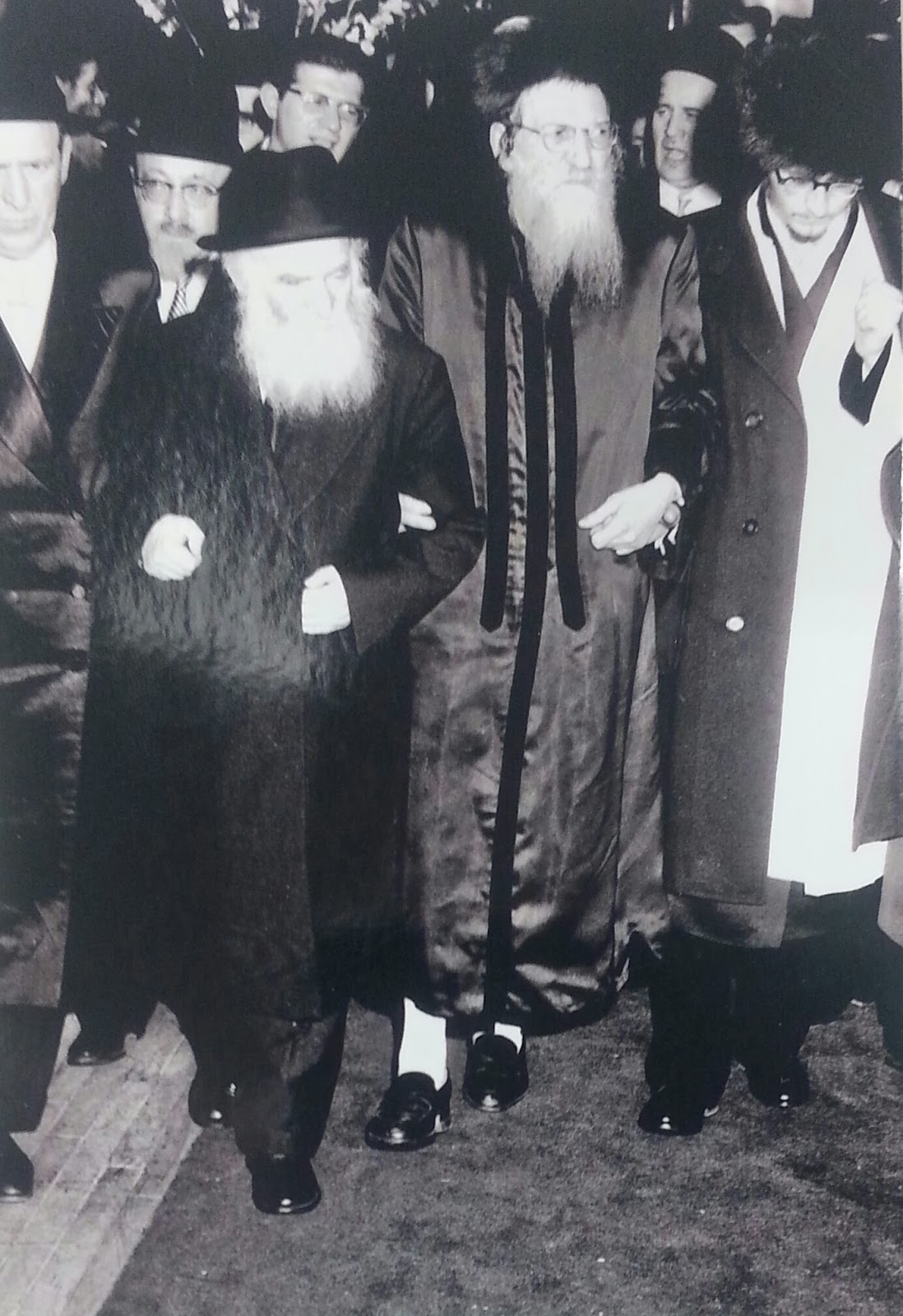 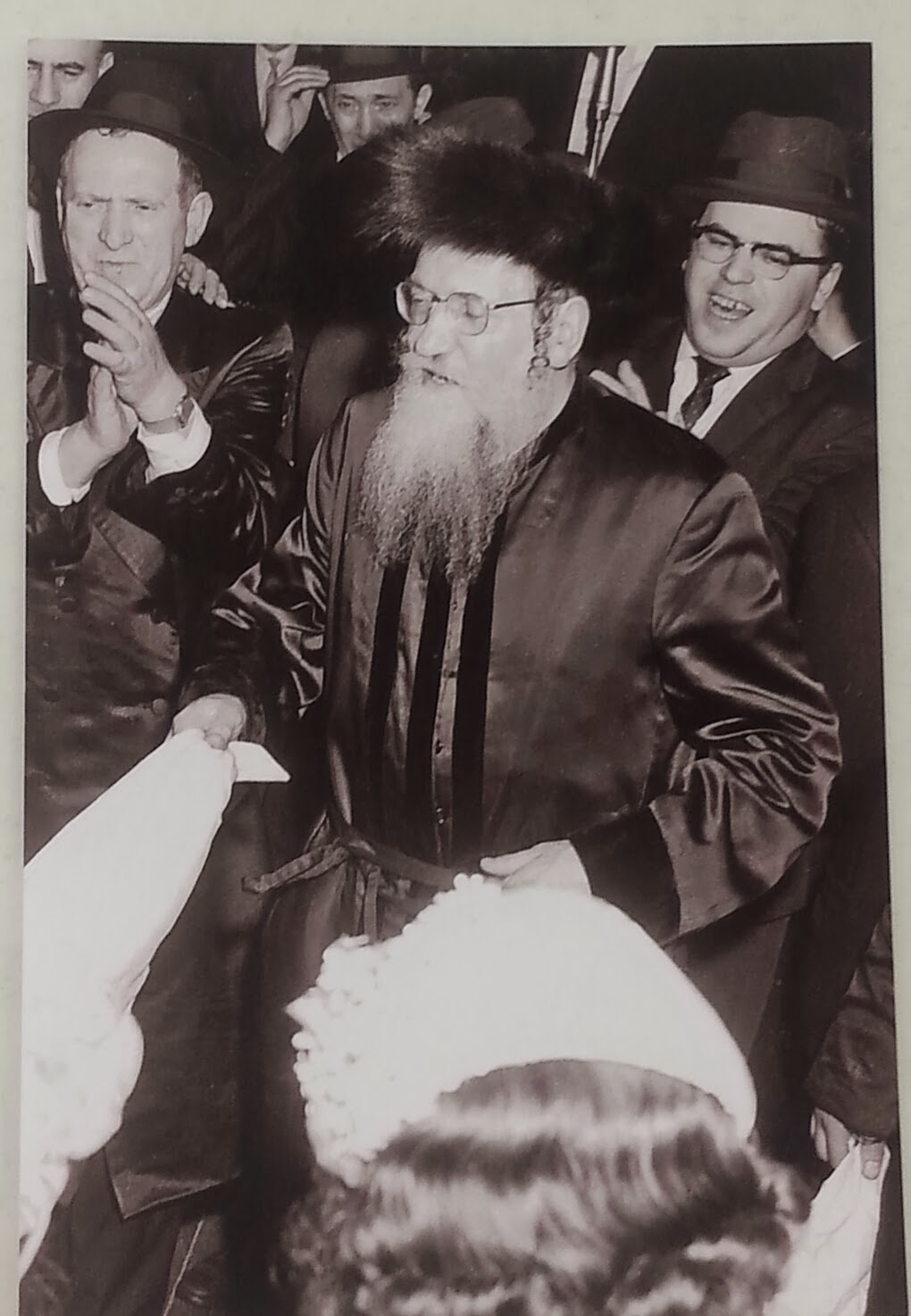 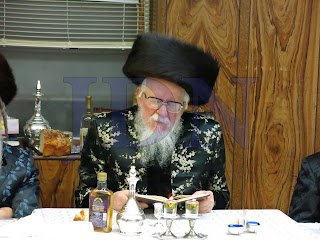 You can talk out of both sides of your mouth! You can tell the Satmorim that you only accept holy money ---- אז די הייסע תפלות ביים ציון המצויינת פון רביהקוה"ט זי"ע אין קרית יואל יצ"ו האבען געהאלפען אז די רבי ז"ל האט אים צוגעשיקט ר' הערשל ני"ו, דער מקור פון כשר'ע געלט. And then you can see where your Israeli bread is buttered too! So if it gets buttered in places like Gush Etzion and other sources of Zionism ---- then so be it. You may not send הרה"צ ר' יהושע לייפער שליט"א to such sources of impurity, like the Rabbinical conference of Rabbanei "Ariel" under the leadership of Haifa Chief Rabbi Shor-Yoshuv Cohen, but you can send a lieutenant like Pomerantz and sponsor their conference despite the מקורות זרים... And you can be very proud that the Oz VeHodor seforim are learned in all circles, even in the Mizrachi and CHaRDaLim ones... 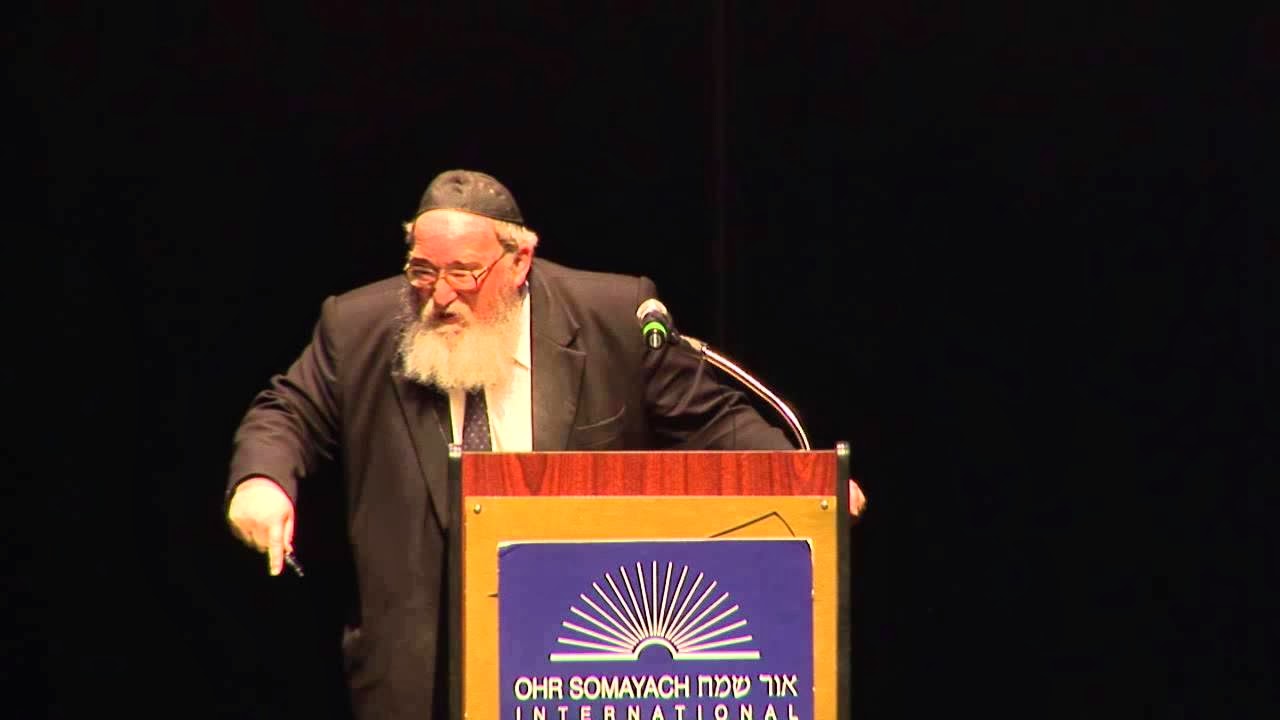 So what do organizations like Aish and OS do to get around it? To get around that old-time stigma that many still worry about? They created a new בריה, The "Rav Dr." [ It does exist on a small scale in the MO world, but it's probably limited to RJBS and his son-in-law, Reb Aron Lichtenstein, as far as I can tell. But they really never had an issue with secular education.] I saw this newly-created title in one of the Heimishe publications this week, and ס'האט מיך געקאסט א לאך, like they say in Williamsburg. Over the past decade or so, maybe due to the protests of the Rabbonim and Roshei Yeshiva who felt like they were being lumped together with every two-bit askan, we've been witness to the birth of the "Rav" title in place of the "Rabbi." So, let's say, Rabbi Moshe Tuvia Lieff became Rav. So did the Satmar and Rachmistrivker Rebbes and Reb Moshe Chevroni to name but a few. You now have to write the "Lakewood Rosh Yeshiva, Rav Malkiel Kotler." Rabbi Paysach Krohn was not so lucky. Maybe next year. Anyway, what to do about Charedi Rabbis that also have PhDs? Doesn't that fly in the face of everything we've been taught, that once you've been to university, and ver redt noch if you went to graduate school and wrote a paper and got a PhD, that you've lost your daas torah and cannot be on par with those who've made Torah their only calling? I guess we have come a long way. Because we have witnessed the birth of the "Rav Doctor" in our times. I guess what that says is that is IS ok to get your PhD and you can still retain your daas torah.

I know, that's a terrible pun, but I could not resist! כו"ע מודו that Satmar has some of the biggest ליצים around. Along with some of the biggest קנאים. You can find most anything there - if  you look hard enough. But seldom do you see a story like this, where the ליצנות and the קנאות go hand in hand. What we have here is a group - seemingly a group of Satmar Chassidim who traveled with the Satmar Rebbe to Eretz Yisroel.  I'd venture to say that they do not worry about פרנסה very much, otherwise they'd be working. After all who has time and money to travel to ארה"ק just like that? These fine Jews are limited by the ויואל משה as far as where they can travel and visit in the Holy Land. And how much can one sit in ים המלח looking up at the sky after all? You can't come to EY and not enjoy yourself... so you go to the flash points, to Goloventzitz, where they found bones, and you are "מוחה". That way you feel good about your קנאות and you justify your trip somewhat. But the לץ in you can't help himself. He needs to sing צאן קדשים after his קנאות טאנץ, because he knows it's all a joke. There's nothing there. All those years of fighting, and all the money that was lost by developers and people who made down payments - it was all for naught. And like we said at the outset, דא ליגט דער הונט באגראבען, it's not about the bones. And the fact that they showed up the Zalis, who still maintain that it's full of קברי הקדמונים, that doesn't hurt either - and the דידן נצח is on them too.

Some background info on the whole "controversy." (Hebrew) 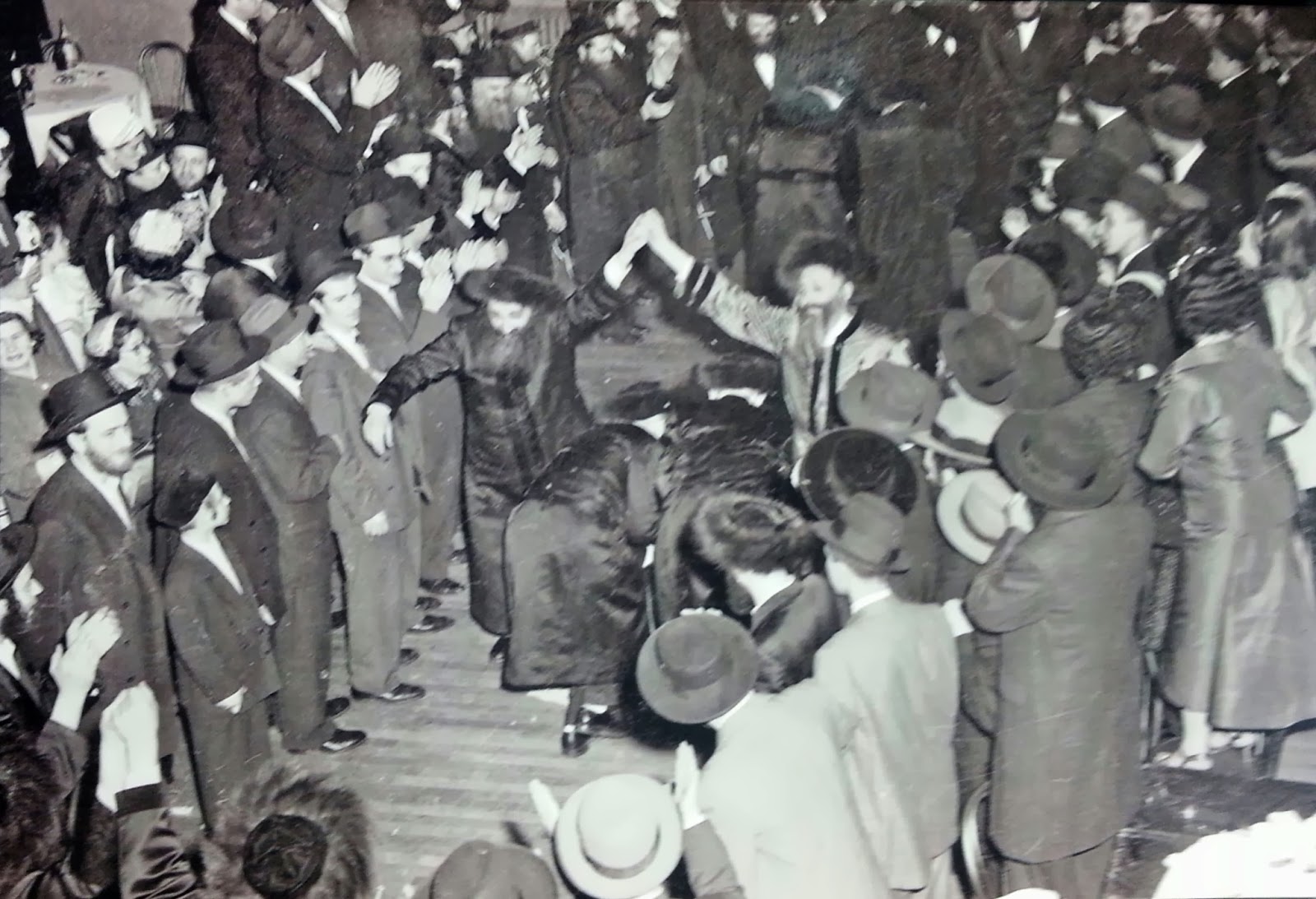 The Bobover Rebbe, (r), and the Veitzener Rov, R. Tzvi-Hirsh Meisels, zt"l, (l), dancing the "Rebbe Reb Meilech's Tantz" by a wedding in the "early years," as is evident from the lack of tznius police... The dance has a pair holding hands and alternatively going "over and under" another paid holding hands. Tough to explain, but if you've seen it you know what I mean. The tune used to accompany the dance is what Y"T Erlich used for his "nisht emes" composition.
Posted by Hirshel Tzig - הירשל ציג at 10:55 PM 11 comments: 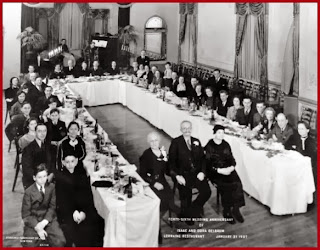 A niggun of the Rebbe Reb Meilech that was sung in Klimovitch, White Russia by Chassidei Chabad and recorded by Reb Shmerel Feldman, ע"ה. Recorded here by a kid with a great voice. 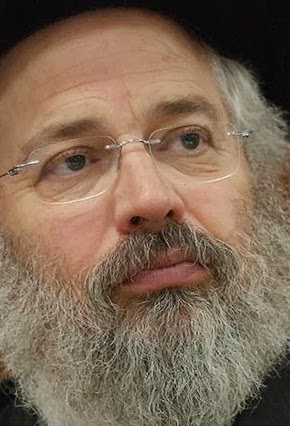 There is much to read in this treasure trove of letters. Reb Uriel Zimmer was a topic of conversation on this blog way back in 2005. If you did not grow up in קנאי'שע circles the name may not mean much - or anything to you. But if you did, and if you think the fact that he was so vehemently anti-Zionist means that you know his shittos and opinions - think again. יש לומר that it was דוקא his opinions regarding the young State that made him see in the Rebbe an אח לדעה, if you will, which then allowed him to become so מקושר. These letters to the חסיד ר' טובי' בלוי give us a glimpse into the Rebbe's early years of leadership, as well as what it was for a bochur/yungerman of that family to become a chossid. We can see what RTB's doubts and apprehensions were and how they were put to rest by RUZ, who knew where the young Reb Tuvia was "coming from," having come from there himself. The letters had been printed in photostat form back in 5765, but are now published like it should be, for the very first time. If you're looking for זאפטיגע סחורה you can jump ahead to page 32 to see where the Rebbe discusses the "Malochim" in a Yechidus with Reb Uriel. Halevai the שפיץ חב"ד'ניקעס should have the hiskashrus that he had. 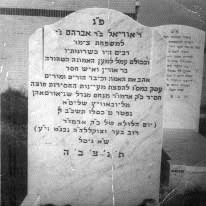 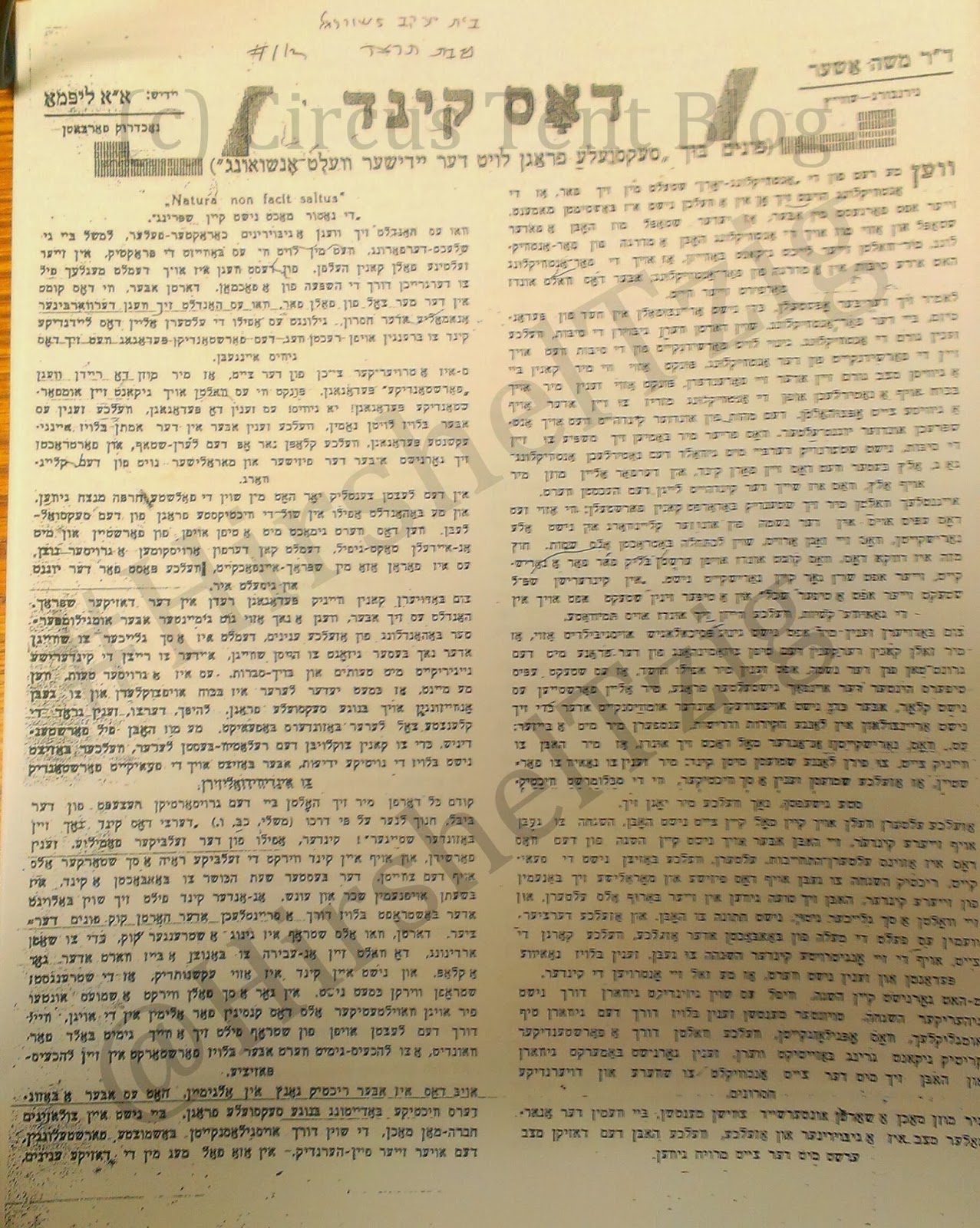 Please find the attached Maamar of Chassidus Metzuyenes Magen Avos 8 Vatichtov Esther on Purim. The last paragraph of this Maamar is clearly based on the Magen Avos' Shitah that the Tzimtzum impacted the Reshimu and consequently the Reshimu needs an Aliyah. The Hagah of the Maharash on Parshas Noach in Likutei Torah LeGimmel Parshiyos that Tzimtzum did not impact the Reshimu is well known, as well as the many Maamorim of the Rashab, so in the next few weeks, IY"H I will share a compilation on the Reshimu from the both sides, starting from the Alter Rebbe.

Wishing you Kol Tuv and a Freilichen Purim,
Akiva

JEM's video last week in their "Living Torah" video series brought to mind the whole controversy that swirled around Chief Rabbi Levin's visit in 1968. He was seen as a paid mouthpiece by some self-appointed activists and was even shouted down on occasion. I'm not sure what those activists expected of him, living in that tyrannical society that he did... We attach some very fascinating clips and articles about his visit, some of which include a speech at Hunter College in NYC where said students interrupted his speech, an appearance with Rav Pinchos Teitz on his weekly radio show, his yechidus with the Lubavitcher Rebbe, and an article in Ami magazine about the visit. One thing is for sure, this Chazzan that they had in Moscow was first-class, top of the line! Due to the constraints that these "box" clips put on some browsers we have brought one on the page and 3 links to the box.com website.

Click here for the reception in Elizabeth, NJ with HaRav Pinchas Teitz

Between the Hammer and the sickle