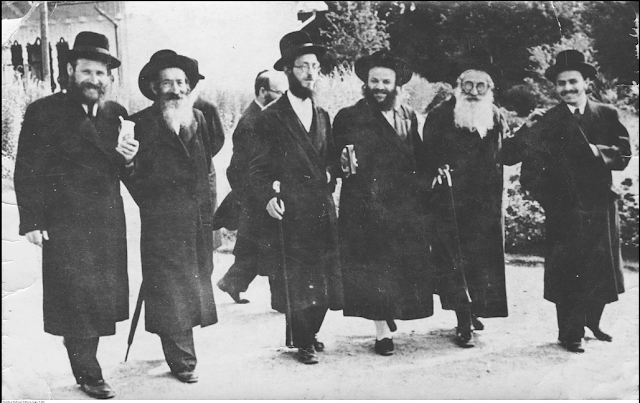 What kind of inspired this post was the Bene Beraq Vizhnitzer Rebbe's recent trip to Cleveland to partake in the sheva brochos of his grandson. The Mechutan is the Cleveland-Aleksander (or is it Aleksander-Cleveland?) Rebbe, brother of the one in Bene Beraq. There was a flyer printed, welcoming him to the mistake by the lake and announcing the sheva brochos schedule. Signed on that flyer were many local institutions, including Chabad(!) and their respective Rabbis. A Midwestern friend of mine noticed that conspicuously absent from the flyer was the late, great Telsher Yeshiva! At first I thought that only shuls were doing the welcoming, but he pointed out that the Hebrew Academy signed. So what's going on here? Is it ad k'dei kach? Did they cease to exist? Well, in 1917 they announced to the world that they exist. Maybe they need to do that again 100 years later?

{To be fair the Kolel Yad Chaim Mordechai, technically a by-product of Telshe,is also absent, yet they exist.} 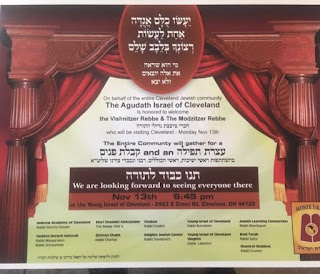 Why is Mishpacha Mag going after the "Peleg"

Beats me. I think they're alienating many readers with this article. No need to bring it up at all. They don't gain readers from publishing it. It's not like they're writing about Lubavitch of Reb Hershel Schechter and thus adding YU Yeshivishers or Lubavitchers to their readership. Here it's a lose-lose. Plenty of their readers are Mamshichisten and thus see Reb Shmuel as their mentor and leader. They support the demonstrations and are deeply hurt by the fact that their Yeshivishe brothers are selling them out. Just stick to the usual veyberishe issues and you'll be ok. You hear me Rabbi Grylak? I know from what I'm talking. 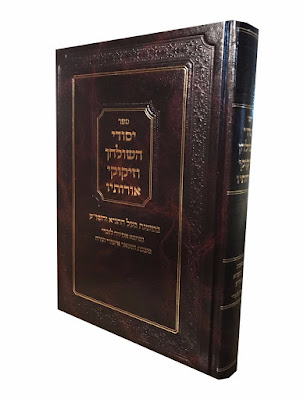 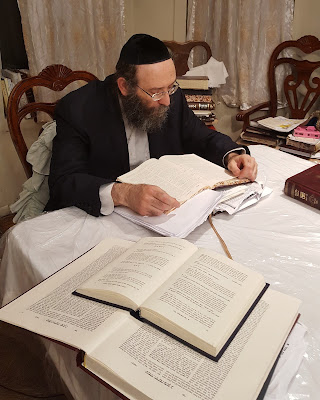 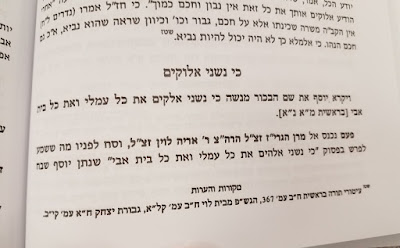 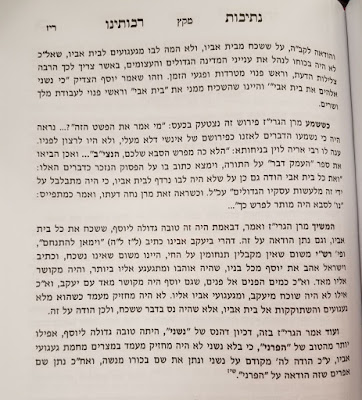 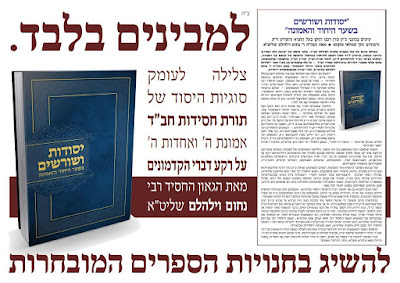 The roots and principles of Shaar Hayichud Vehaemuna

A scholarly treatise, attempting to reach the bedrock and very heart of The Alter Rebbe’s approach to the principles of faith in Hashem and the unity of Hashem * “Yesodot Veshorashim BeShaar Hayichud Vehaemunah”
Author: Rabbi Nachum Wilhelm

The author strives to show the complete structure of the Alter Rebbe’s profound edifice and development of ideas .He quotes from and elucidates on the seminal works of Chazal, and the commentaries of the Rishonim; the Rambam and the Abarbanel. He brings the subsequent revelations of the Kabbalistic masters; the Ramak, the Arizal and their respective schools. The core of the manuscript is derived from Derech Mitzvosecha of the Tzemach Tzedek, and from the Rebbe’s Hadranim. Further source materials were gathered from the works of our Holy Rebbeim and the interpretations of the venerable Mashpiim; R. Aizik of Homil, R. Hillel Paritcher, R. E. Y.Rivlin, R. Chaim Moshe Lieberman, R. Gronem Esterman, R. Yechezkel Faigin and ylct”a Rav Yoel Kahan, in his famed Sefer Haerchim. Utmost care was taken to keep the form and writing style as close as possible to the original text. We are pleased to present a small selection of approbations from present day chassidic scholars and esteemed Rabbi’s, expressing their warm reception and strong recommendation.

“Rabbi Wilhelm’s erudition was already apparent when he was a student in our Kolel. After perusing the manuscript I could not restrain my excitement by his exceptional ability to take lofty mystical concepts and make them approachable to the everyday person. It is my belief that this gift was bestowed on him from the Almighty in reward for his incredible diligence in the study of Torah.” Rabbi Chaim Shalom Deitsch, Rosh Kolel Tzemach Tzedek and noted Mashpia

“How great is his merit to have utilised his talents in revealing the great wonders hidden in the footnotes and glosses to the works of our holy Rebbe in his work on the Tanya!”
Rabbi Chananya Y. Aizenbach Noted Rosh Yeshiva

“It is widely known that the ideas brought forth in Shaar Hayichud Vehamuna, and further developed in numerous maamorim, are the backbone of Chassidic thought and service of Hashem. Certainly this volume will invigorate the study of serious and devoted Torah scholars.”
Rabbi Laibel Altein Chassidus Mevueres, editor Heichal Menachem, director

“It was much appreciated that the book begins with a discussion about eliciting love and fear of the Almighty, for these principles are the foundation and soul of Chassidus Chabad. As the well known saying of C”K Admur n”e,” the chassidic interpretation to the proverb, “great is study as it brings to deed” , relates to the deed of serving Hashem in earnest prayer.”
Rabbi Yosef Y. Ofen, Mashpia Toras Emes

The printing of this sefer has been made possible by donations in honor and memory of Reb Gedalia Shaffer ob”m of Crown Heights. A great scholar devoted to chassidic teachings. Since publication in Israel, the volume has shown to be a bestseller, held in high esteem among mashpiiim, temimim, scholars and academics.
Posted by Hirshel Tzig - הירשל ציג at 6:01 PM 2 comments:

Apparently this was published (!) in an Israeli newspaper called כל ישראל in honor of the recent yohrtzeit of the late Ponovizher Rosh Yeshiva. How any editor would publish something without taking just 2-3 minutes of his/her time to verify this.... is beyond the publisher of this blog. 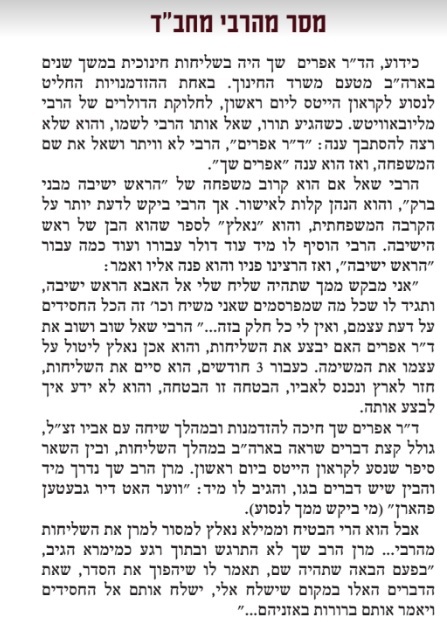 An excerpt from the new book available for purchase HERE. Courtesy of the author. 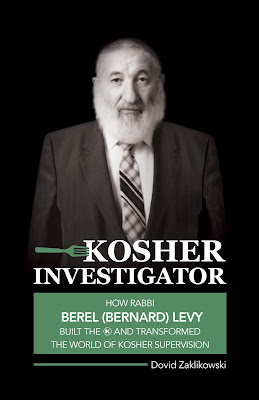 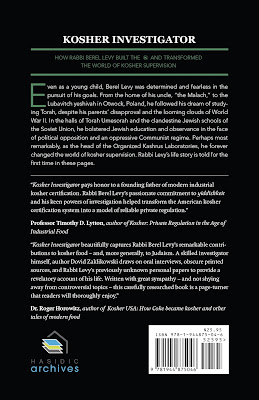 FYI: SMR's father, R' Avrohom Aron haLevi Rubashkin, zg"z, was born in the small town of Nevel, White Russia. As was Reb Yeruchem's shver, HaGaon Reb Berel Shvartzman, זצ"ל.  יחוס שוורצמאן But that's beside the fact. I'm not trying to sway the spotlight, or anything like that. 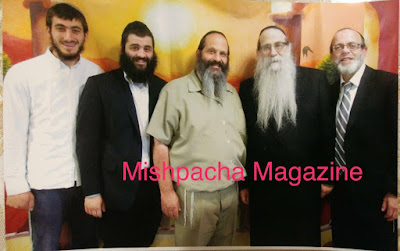 A reader was quite upset with the post that "accused" the Munkatcher Rebbetzin of accompanying the Rov on a walk whilst on דאטשע. מ'קאן שוין מיינען, ווער ווייס וואס... According to him it was NOT the Rebbetzin, or his mother, the דרכי תשובה'ס Rebbetzin, and he provided the pictures to prove it. He says it was the wife of Reb Mordche Wulliger, later of New York. That she only looked old because of her frum style of dress. Maybe he just wants to set the record straight. Maybe he's a stickler for the truth, and isn't so bothered by the idea of the Rebbetzin walking nearby. 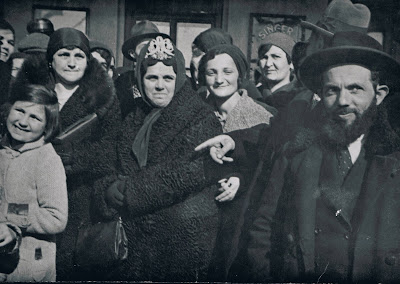 Here's the Rebbetzin Ruchel Perel, daughter of Reb Yakov Moshe of Komarna (center, with the "shteren tichel") at the wedding in Munktach in 1933 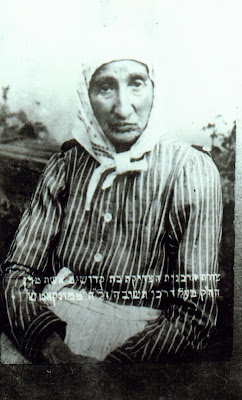 How the holy Sochatchover celebrated... 100 years since the Balfour Declaration

I know real Lubavitchers aren't into Zionism too much, but here's my 2 cents.

Rav Yehuda Mamlek, one of the חשוב'ע סאכאטשאווער תלמידים, writes in אביר הרועים that the holy שם משמואל was very excited upon hearing about the declaration of Lord Balfour stating that the British Government appropriates Eretz Yisroel for עם ישרא-ל. A Meeting was called by the שם משמואל to get orthodox עסקנים and גבירים to buy land in ארץ ישרא-ל to build שיכונים and ישובים in the new land. At the event he showed them a אבן עזרא in מגילת אסתר saying that certain גאולה'ס have to happen when you see a sign from Hashem that the time has come. At the same time we had the holy Munkacher Rov זצ"ל calling the declaration בעל פעור etc.... נוסח אונטערלאנד - A place that was (in)famous for name calling. The Munkatcher's opposition didn't stop the train and the vision of the שם משמואל succeeded. One hundred years later and we now have almost a million Jews learning and davening in Eretz Yisroel , while several more millions are saved from definite assimilation.  Obviously this does not play well in certain circles, you know who they are, who are blindfolded to reality. Not being comfortable going after the שם משמואל they'll kill the messenger, so to speak, which in this case is Rav Mamlek. That's fine.  But we have now a new letter from Rav Michoel Forshlager,  a סאכאטשאווער תלמיד (kosher in סאטמאר because he once glanced over at their side) vouching for Rav Mamlek's גדלות and honesty. So now we're in kind of a pickle... Their next move to discredit these facts will be to show that there is a letter from the שם משמואל against מזרחי, and Zionism, which is also part of their tactic that whoever disagrees with their philosophy, is on the same page with Ben Gurion on עקירת הדת. even though this plan for building the ישובים was to build חרדי ישובים against בן-גוריון ... but they don't care for the facts.... I hope my point is clear enough. 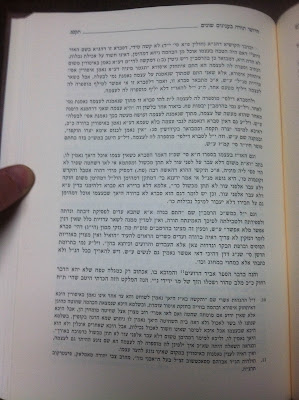 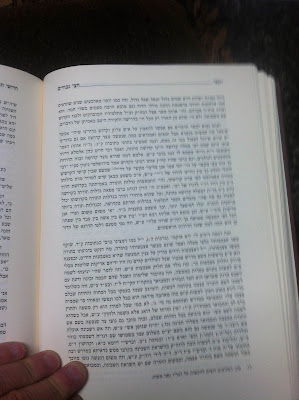 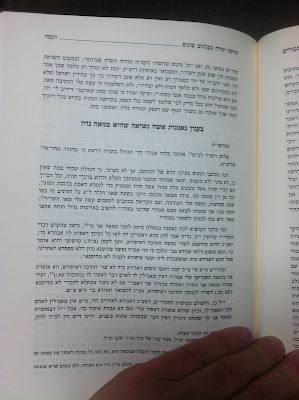 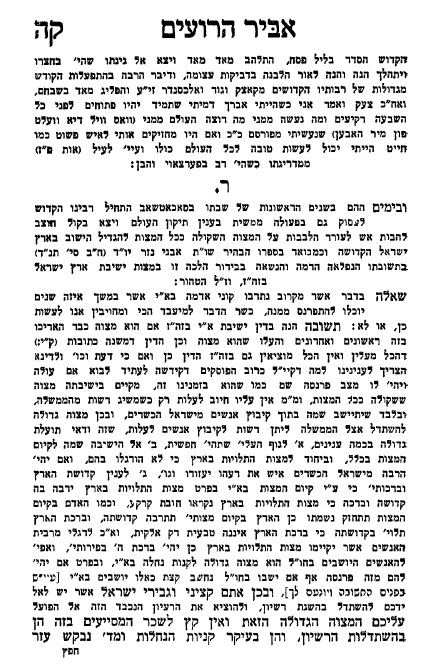 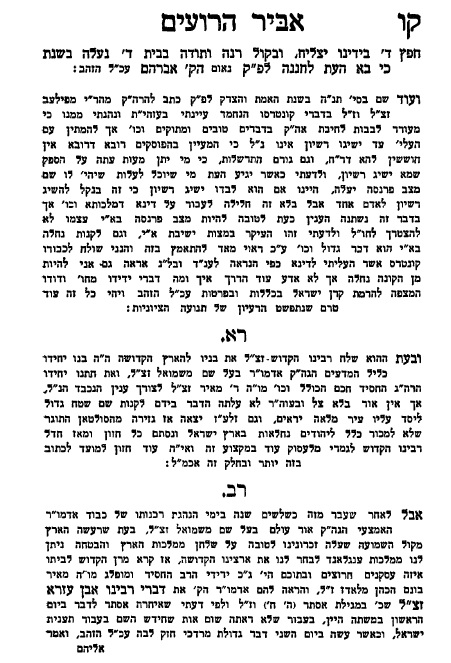 please find attached a remarkable Maamar Chassidus on Parshas Vayera. This amazing Maamar is being published for the first time from Manuscript! A tremendous amount of time and effort has gone into preparing the text for publication, your financial support would be greatly appreciated.

All contributions can be made out to: Akiva Shavrick, 6414 Park Heights Ave, Apt A3, Baltimore Md. 21215. May we see the coming of Moshiach speedily in our days. 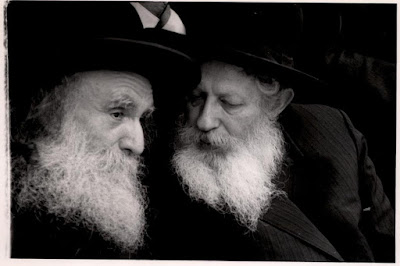 L-R, Reb Itzikel Of Amnshinon-Boro Park; Reb Yankel Alter, then son of the Gerrer Rebbe, currently Gerrer Rebbe. Reb Itzikel was a nephew of Reb Shimele Amshinover (who was in Japan and Shanghai during WW2) and had a small shtiebel on 15th Avenue in Boro Park. You could've lived around the corner your whole life and never seen or heard of him. That's how low-key he was.

And here's a sefer, recently published, about his father zt"l and older brother hy"d: 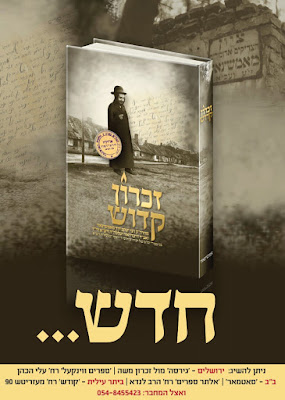 why RBB didn't want to bring לימוד המוסר into his Yeshiva

Hi Rabbeinu, Still love your blog. I found this and thought of you. It's a maysa about Rav Baruch Ber from Rav Yehuda Gershuni, otherwise known as Yud'l Grodner, one of the greatest illuyim of the pre and post war generation. He had semicha from Rav Baruch Ber, among others. He was later a talmid of Rav Kook and eidem by Rav Eliezer Silver. This is from a sefer zikaron about him called Afikei Yehuda. 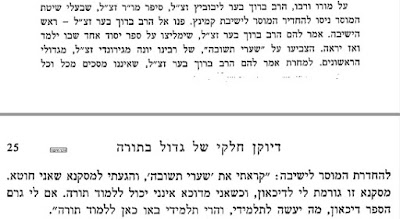