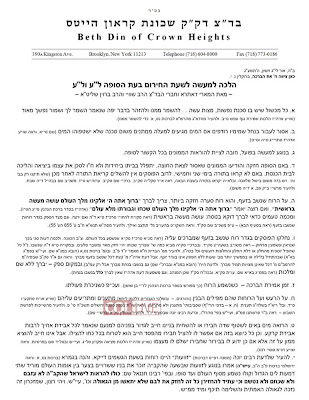 The very talented Reb Aron Feder does a very good job on the Jewish history of the town that literally is no more.  Nuclear explosions will do that - wipe towns off maps. It's ironic how after the rise of Communism the one they turned to for help with their religious needs was none other than the Lubavitcher Rebbe, כ"ק אדמו"ר רבי יוסף יצחק נ"ע,   (and not one of the many Tchernobiler Rebbes, who admittedly no longer lived there...)

Our good friend Dr. Samuel Heilman likes to put the magnifying glass on the protagonists of his books, articles and interviews. Now Ami magazine writer Yossi Krausz turns the tables on him and shines the spotlight on the good professor. As is often the case with writers of all kinds, they're a lot nicer than some of their hit pieces would lead you to believe, and Heilman is no exception, for the most part. Yes, he writes snide, nasty and untrue things about Charedim in general, but he's an all-around nice guy. Just look at that nice smile. And he has a גמרא שיעור as well. Krausz' style is unique here; it's gentle on the one hand, never using harsh words, but it hits hard. VERY hard at times. Of course I'm prejudiced against him because of his so-called biography of the Lubavitcher Rebbe, זצוקללה"ה, but then again, that wasn't the first, nor the last time we heard from him, and neither was it the only topic he addressed ever. He's an expert of all Charedim - not just on Lubavitcher Chassidim. And Rabbi Herschel Schachter as well. Read and enjoy, maybe print it out so you can read it when the power goes out in the near future. Which will probably happen in my house as well, which is why you may not see me update the blog - or even moderate much in the next few days. For best results right-click on the pages and "open link in new tab." That will allow you to click on and enlarge the images so that you can actually read them. 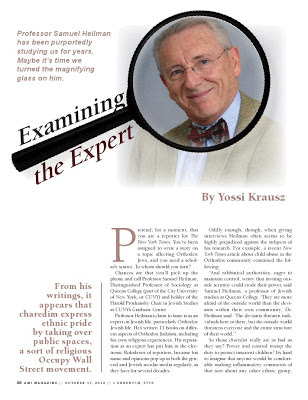 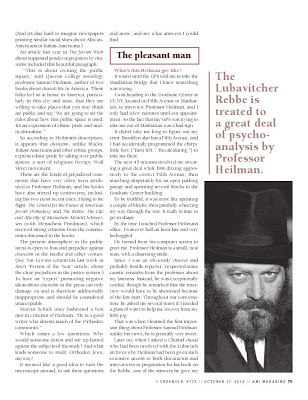 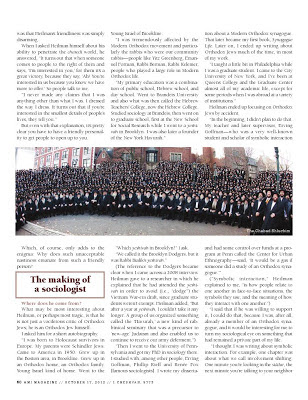 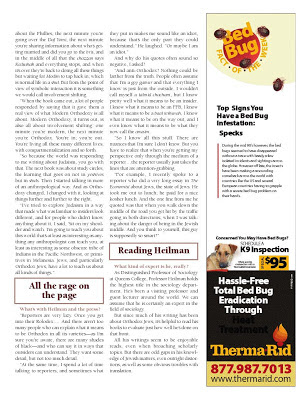 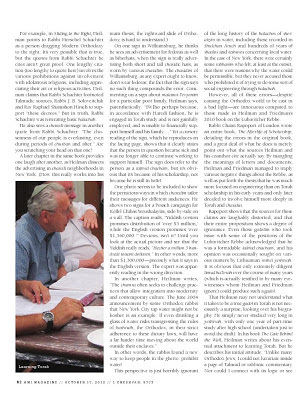 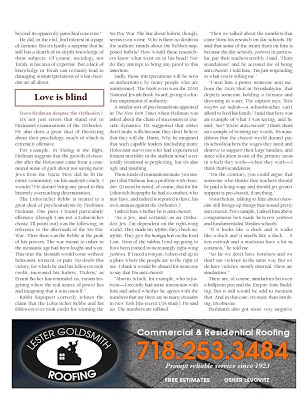 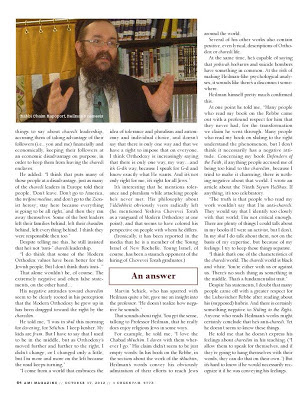 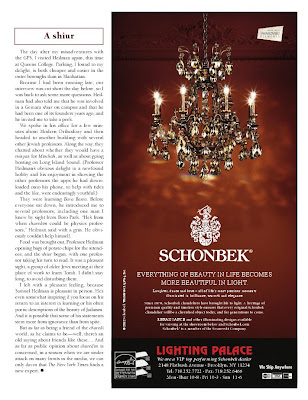 As was published in this week's "המבשר" newspaper.
Click on the "download arrow" below the PDF and it will open the file in Adobe Reader, where you will be able to enlarge it and rotate the view so that you can read it properly. Sorry for making you work hard..............
Posted by Hirshel Tzig - הירשל ציג at 8:46 PM 14 comments: 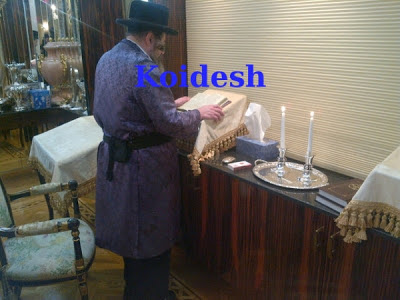 As you now know, I just recently ‘got up’ from shiva, and I am still within the shloshim. I apologize for my inability to schmooze with you when you came to be מנחם אבל, I'm sure that you realized that there were other visitors who had to be "entertained" and acknowledged. Be that as it may, I would like to briefly write to you some of the things I wish I could have told you during shiva. When the phone rang at that hour, I immediately knew why they were calling. My father has been sick for some time now, and I was not surprised. Of course, that didn't abrogate the overwhelming numbness that gripped me when those dreaded words were uttered: “we are having a levayah.” I quickly drove over to the hospital and met some of my family members as well as a local tzadik who was assisting in all of the arrangements. Slowly, I walked into the room where my father lay. I did not look at where his face was although I knew that he was covered by a white sheet. Peculiarly, I noticed his feet sticking out from beneath the sheets, covered by the socks that he would wear. I did not get to close to the bed. I spoke to father in a way that I never spoke to him before. As my voice was chocked with emotions, I spoke to father words that have been on my mind for a long time, yet have never been vocalized: "father, you merited to go to yeshiva against all odds. You even learned in yeshiva post-marriage, despite great opposition from family and others. You continued to be the only one in your family to be a shomer תו"מ, something you accomplished without familial support. And look at the family you raised! All of them frum, all of your descendants have learned in yeshivos and many continue to do so! father, this is in your merit and this merit should escort you in the real world. This was this gist of what I told my father; words that came from somewhere deep within me.

Looking back, what else should I have said? 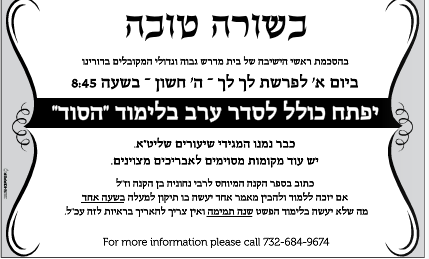 Interesting how there are no "40-year old מילא כרסו בש"ס ופוסקים" prerequisites in the announcement. I thought they were careful about matters like that. Also, is that a put down of those who only learn גליא דתורה in the end?

"This speech was probably delivered at a wedding or sheva brachot between 1945 and 1948. Rabbi Rappaport praises the parents of the newlywed couple for giving their children a Jewish education. He criticizes American Jews who do not provide their children with a Jewish education, since they believe that this will prevent their children from succeeding in American society. He mentions the concentration camps and stresses the need for a Jewish homeland in Eretz Israel, and concludes with the need for the Messiah."

A bio of Rabbi Rappaport 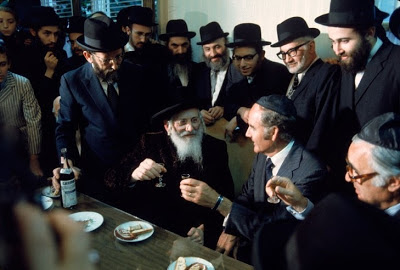 Sen. George S. McGovern - who died today - visiting with the Bobover Rebbe during the former's disastrous run for President in 1972. 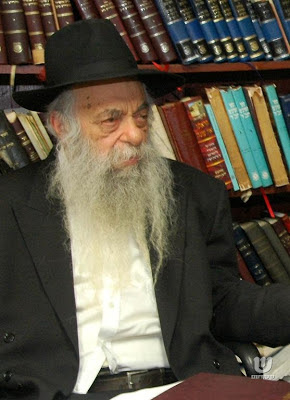 RRH was a Talmid of the גר"א who traveled to the Mezritsher Maggid and later refused to sign the ח on Chassidim. He was Rov the famous 3 Kehillos of אה"ו in Germany. I read this in a biography of his Brother-in-Law, Reb Boruch .פאריז, ע"ה

Here is the seder:

Miracles in the Life and Thought of Rabbi Barukh Rabinowicz 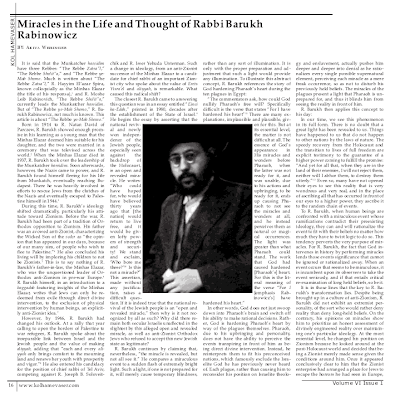 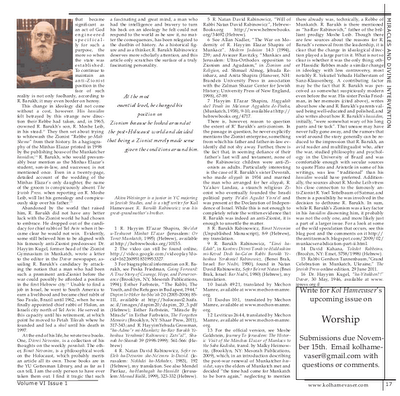 Thanks to a kind reader for bringing it to my attention. 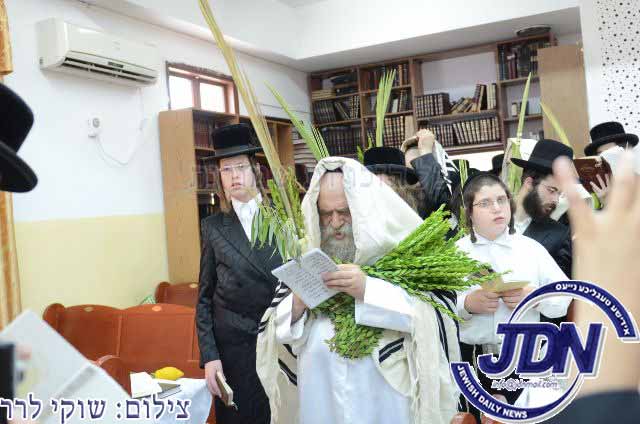 Pictured is the Makover Rov of Kiryat Atta, Israel. 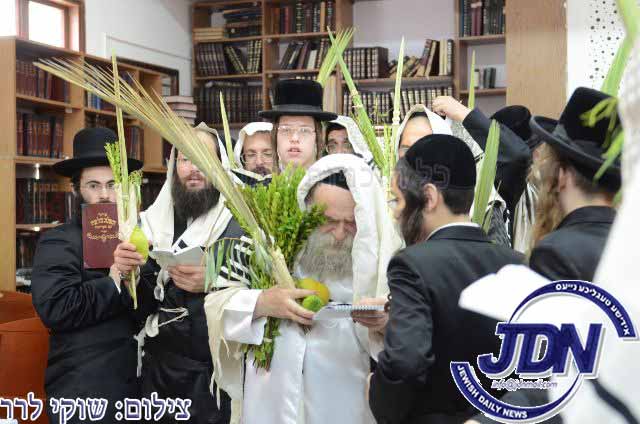 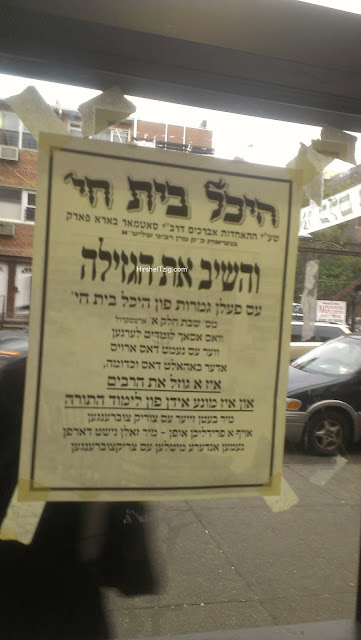 This poster is from the main Satmar shul in Boro Park. The shul is under the leadership of Reb Aaron. But in order to gain control away from the Zali faction it took some struggle, including the use of some violence. The leader of the Zali faction in Boro Park is the former dayan of this shul Reb Chaim Duvid Katz who after being forcibly removed from this 53rd St. Shul opened a competing shul that is functioning as the Satmar shul under Reb Zalman Leib. Reb CD Katz - who is a radical kanai - when he was still dayan opposed having Artscoll gemoros in the shul. But the Aroni faction is relatively more moderate, and the very popular 'Bais Chaya' (in the basement of the shul) is fully stocked with Artscroll gemoros with many learning the daf every day there. Still it is an eye opener to see the obvious anger in an official Satmar notice decrying the "stolen" Artscroll gemoros (of the current daf). But it seems not everybody agrees. Look closely at the word "lomdim" it is crossed out and the word "leider," Yiddish for "regrettably" that many are learning - the daf that is.

4 months of הכנה - Chassidim have nothing on them...

4 months of preparation for RAK's 50th Yohrtzeit. Wow! Even in Lubavitch they do 2 months, tops. כל הכבוד to the folks at BMG, they're firing on all cylinders. Every week every publication has ads and advertorials, ad salesman are seeing green! The man standing in the 3rd page next to RAK is obviously NOT his son Reb Schneur, it's Neuberger or Kramer from NIRC. Even I know that. They should have knowledgeable people identifying Rabbonim at newspapers and magazines, not נשות חיל. 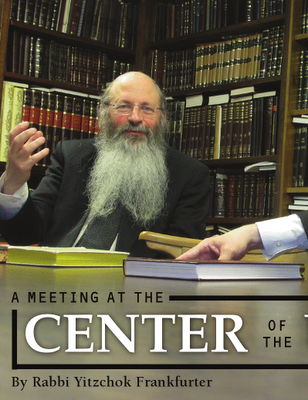 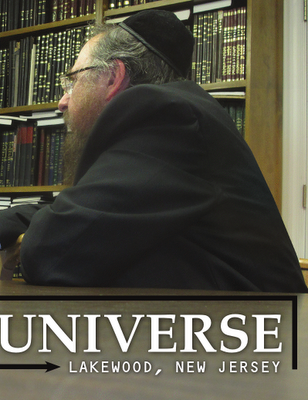 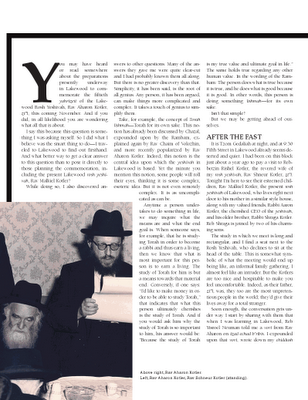 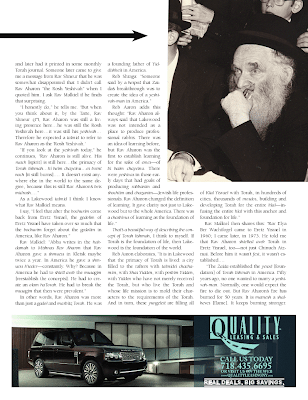 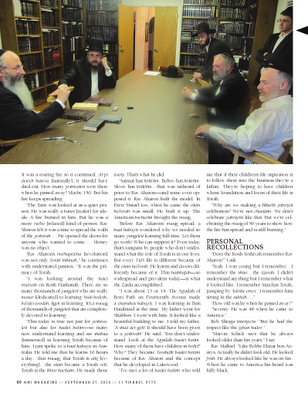 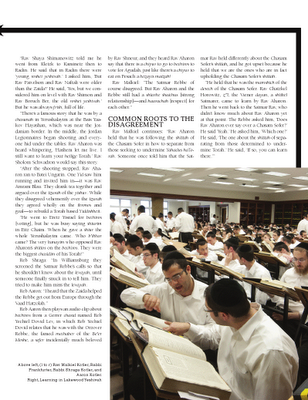 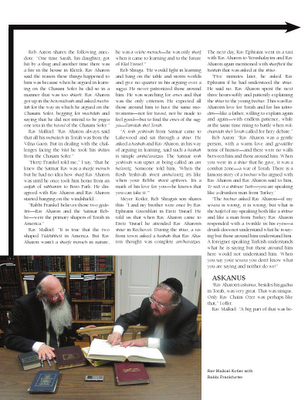 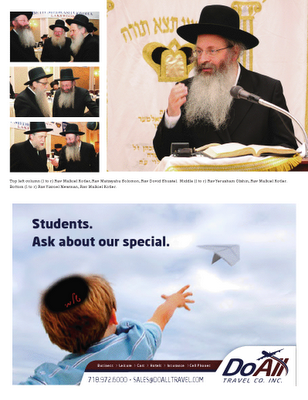 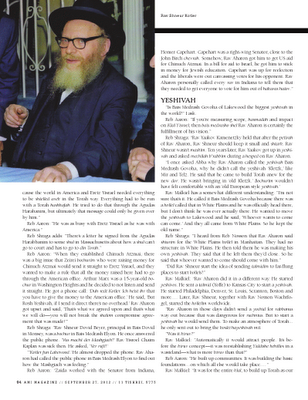 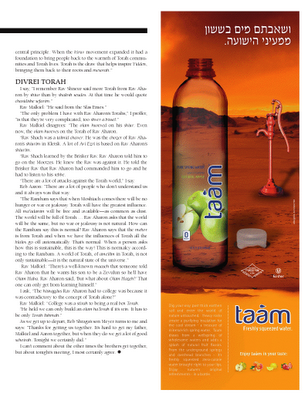 "Why is it NOT the Chabad custom to decorate the Succah as well as to sleep in the Succah?" 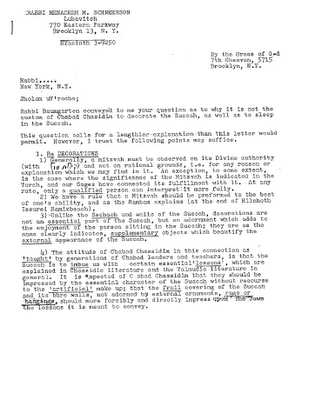 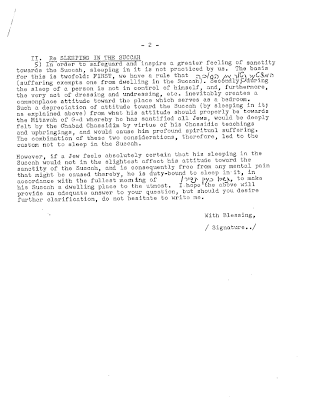