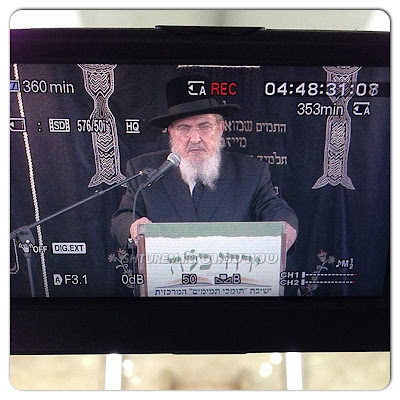 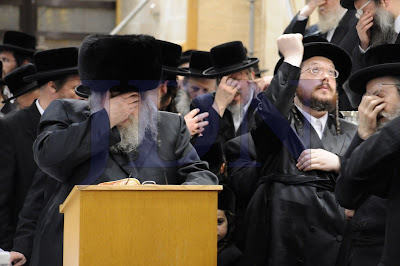 Galicianer Rabbis in the French Zone 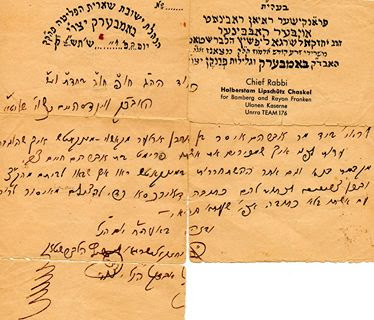 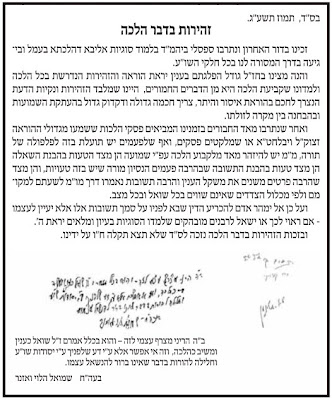 An interesting letter, since we've become inundated with such seforim in the last decade or so, some of them in the name of Reb Chaim K himself, who signs on this letter...
Posted by Hirshel Tzig - הירשל ציג at 11:48 PM 8 comments:

How to sterilize Reb Hillel Paritcher, by Matzav 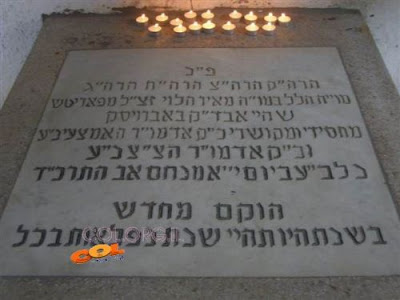 Separating Reb Hillel from the נשיאי חב"ד is close to murder in his eyes. There really was no need to write about Reb Hillel's Yohrtzeit. You could've just as easily ignored it. Nobody would call you out on it. Not even me. What you did here was juvenile and wrong. You should apologize.
Posted by Hirshel Tzig - הירשל ציג at 11:55 PM 15 comments: 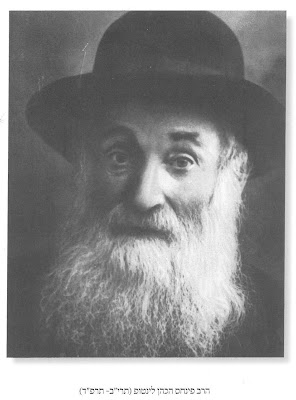 This was a time where Rabbonim were, I guess, independent when it came to דעות, even if the Rebbe was of another opinion. Hebrewbooks tells us that Reb Pinchos was Rov in Vaboylnik.... at a time as well. How ironic! 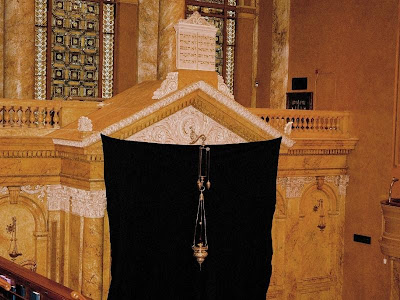 try the Sefardi Spanish/Portuguese נוסח instead

It may be long and drawn out, but if you're musical you'll enjoy it, at least for one year. They have real nusach for kinos, which brings new meaning to what you're saying. אחב"י הספרדים seem to have alot more tolerance when it comes to shul and services in general. They can daven forever, even the irreligious ones. Speaking of which, I see that they have the end of fast listed at 8:53pm in NYC tomorrow. That's a whopping 27 minutes post-Shkiah. Can somebody tell us what shittah/shiur they use when calculating the EOF? Is that they z'man for motzoei Shabbos too? 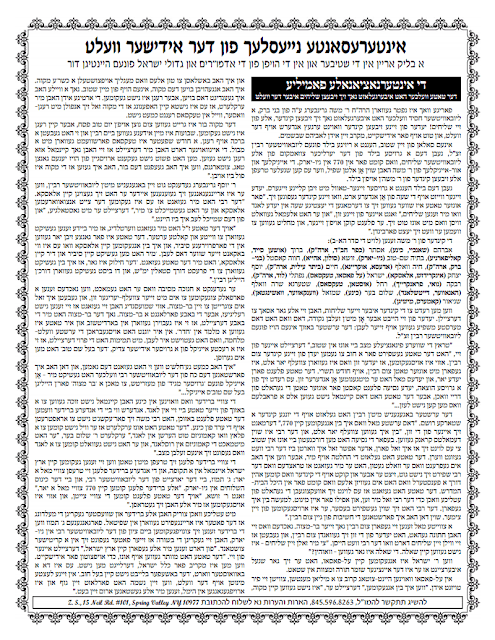 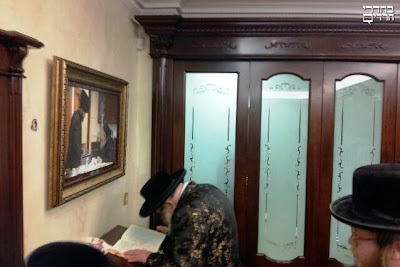 Have you been following the back-and-forth in the 5TJT? 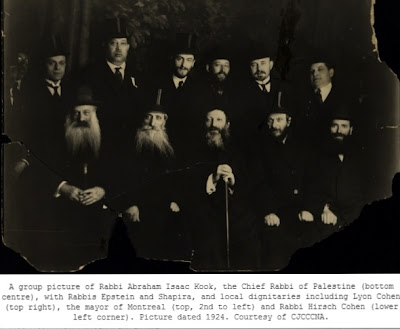 
This is an opportunity that can't be squandered. There is this whole demographic out there that can be swayed either to Chassidus, or to Shachniks like Rabbi Ginzberg, who is importing Israeli Haredism and trying to tow in the simple souls out there. [ I'm not quite sure how a CC talmid becomes a Bene Beraq מחבל, but I guess it happens. And this isn't meant to be a personal attack on the good Rabbi, that's not what we do here...] Barry's encounters Chabad seem to be everlasting, the words of a Tzaddik have that affect. As do shluchim like the late Reb Shlomo Zalman Hecht, who exude a positive message. This is a watershed moment when these people are reacting and rejecting the demagoguery forced upon them. We have to be there for them, giving them the healthy alternative. Am alternative steeped in Torah and tradition yet imbued with Ahavas Yisroel that will keep the masses from totally rejecting the traditions their ancestors fought so hard to keep. Rabbi Ginzberg may be trying to be true to his Rebbi's teachings, but doing it at the expense of Torah leaders dear to thousands upon thousand of Jews is not the way to do it. כאן המקום להזכיר several important points, ויה"ר  that in this זכות may we be זוכה to בנין ביהמ"ק השלישי במהרה בימינו ממש.

You might notice how the פשוט'ע Yiddishe sentiments of חיבת הארץ and רחמנות  etc. are being scorned upon by the thought police. You, you simple gornisht, you with the blue shirt and knitted Yarmulke, you can't have an opinion. We tell you how to think and when to think it. We're the ones who have the mesorah and we tell you what goes. But notice the haredi elite are exporting politics, masked as existential threats to yiddishkeit, to the unassuming. זאג נישט פאר קיינעם, but we all know that the way it is now in EY is a new reality. This was NOT the way it was meant to be. Yes, Lapid's plan ( and the yold Lipman) is wrong and the way to do it is not to force it on the people, but we're fighting a battle that most of us don't believe in. We're officially standing up for a way of life that 95% of us don't follow.  And besides, who brought them into the whole mess, by trying to get yeshivos fully funded, in exchange for not pushing the implementation of mihu yehudi? Once again we're witnessing a throwback to the times of the הייליקע Baal Shem Tov when the scholarly elite was out of touch with the masses and scorned them. We see במוחש how the chassidish vs. misnagdish approach is still a very big factor in day-to-day life. I just don't understand why everything to far-entfer the B'nei Brak approach is a whole pilpul, בבחינת מגדלים הפורחים באויר, and they can't give simple answers to simple questions?!
Posted by Hirshel Tzig - הירשל ציג at 11:27 AM 69 comments:

It may be in response to this piece
Posted by Hirshel Tzig - הירשל ציג at 11:23 AM 12 comments:

"What's the Point of a One-Time Mitzvah?"

I know this puzzles many of you, and angers others of you, so here's an answer.
Posted by Hirshel Tzig - הירשל ציג at 5:51 PM 8 comments: 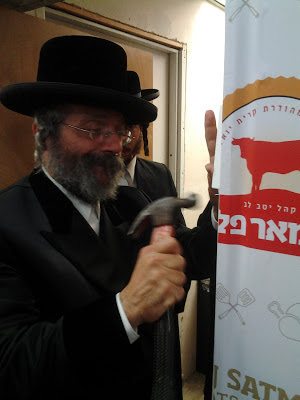 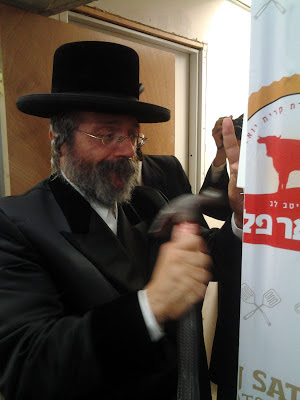 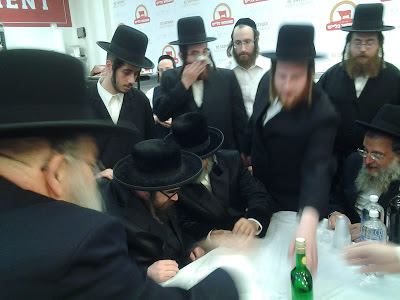 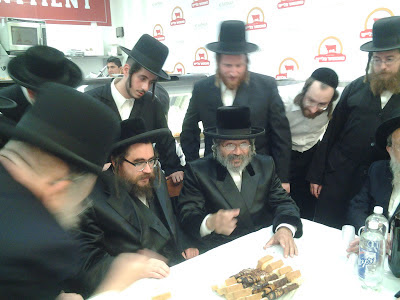 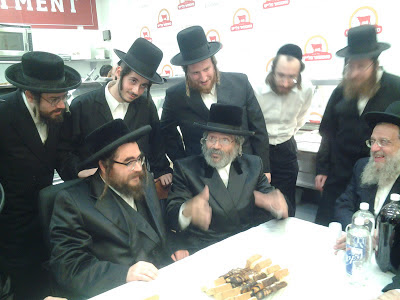 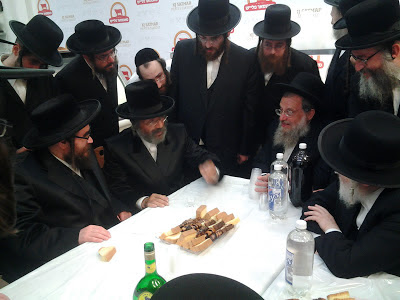 Proof that a Lubavitcher message can get through to frum people.... if done right

Here is the proof of the lying video produced by the Zali party. The guy in the clip claims to have spoken with the actual farmer. But as the NY Times reported, the farmer for Satmar wheat is named Tim Dunn [who by the way has a youtube clip [go to 0.36 seconds] clearly stating that he grows "kosher wheat for the NY community", right there for anybody to see]. But this liar choose to produce a false video to give the impression that the wheat for Satmar matzoh is grown with water irrigation after the wheat matured. See here from the beginning where he tries to show that the ripe wheat stalks bend into flooded fields, also see at the 2:00 minute mark where he shows the entry pipe where the water flows into the field from the channel.

And here is a google map of the true actual field [miles from the false location] from where 1000's of Yiddishe Kinder will be doing the holy seder and be מקיים the holy מצוה.  The attached pictures show the dried up channel being inspected by the SR with a group of רבנים, and there it is, the קהל יטב לב seven week seal, shutting off the irrigation; thus -as a result- the parched, cracked soil is evident in countless pictures including in the NYT. The Chabad משגיחים, inspected the seal everyday! So there was absolutely no 'possibility' of mature wheat having contact with any water whatsoever! It is the height of חוצפה to spread such blatant lies specially about 1000's of yidden just to satisfy your ego. This evident lie, should shed light on the rest of the video as a piece of treif trash. It is time for people like him to think that there is a Creator, Hashem, for whom you will one day need to give דין וחשבון, yes there is a G-t in himel! 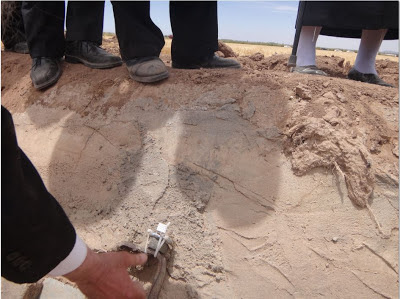 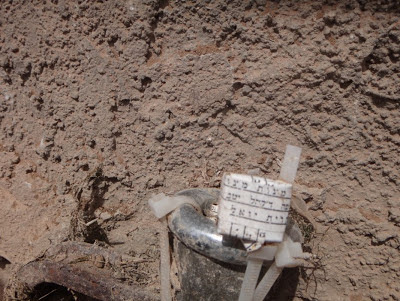 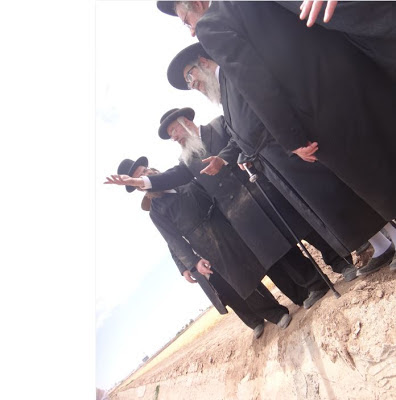 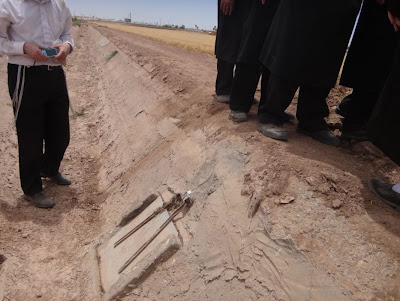 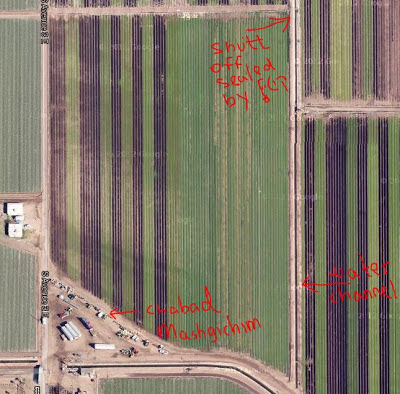 And here we have a תשובה from the גאון ר' שמעון גרינפעלד מ'סעמיהאלי בעל שו"ת מהרש"ג, where he basically says that Arizona wheat is a-OK even if it does rain once in 10 blue moons: 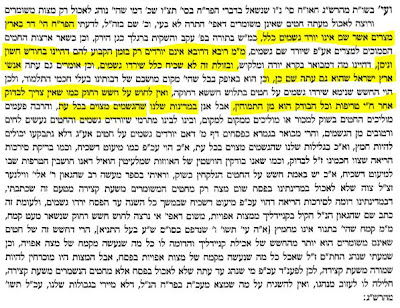