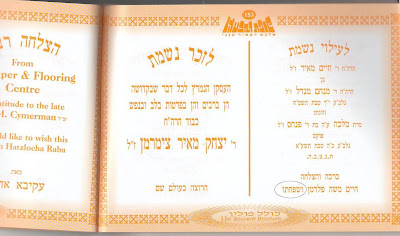 The "kanoyim" have won. Vos Iz Neias is done for. You saw it here first. 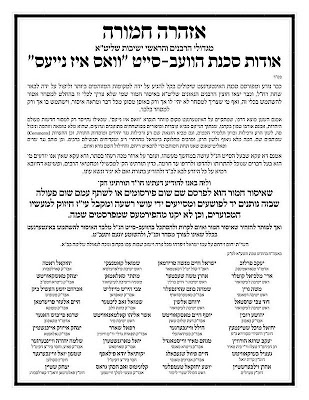 If you're a frequent reader of VIN you'll notice that there's something missing there recently. News. I mean news from our very own Heimishe community. They have plenty of news that most Heimishes don't care about, like what some fashion designer said, or whether or not Newt is gonna run for POTUS, but not the news that many relied on VIN to bring. Why last week alone there were two stories in 2 days that a while ago would've made it onto the website and would've garnered 100s of comments, and nary a word on Vos Iz Neias about it! Not even with initials, and not even without the names. Nothing. It never happened. That's just one example. There are lots more. You'll also notice that the ads may not speak to you or advertise products or services that you require. No more Artscroll and Chinese Auction banners from frum organizations flashing away. All you see now is Zev Brenner, Dov Hikind and ads by non-"BP/Williamsburg/Lakewood groups." See for yourself, don't take my word for it. Lots of Israeli ads from the Dati Leumi sector, Lubavitch and affiliates like Kol Menachem, and small time businesses selling their services. Lubavitch is a bit behind the times here - they'll figure it out soon. But gone are the big ones. And it's not by accident, my friends. Oh, and Rabbi Dr. Twerski too. But that's it.

We all laughed when they banned it a few months ago, saying that it'll never work, that the cat's outta the bag, the horse has left the barn, the ketchup's outta the bottle. We thought that the Lipa concert ban back in '08 was the proof that bans never work. All the pundits told us so, and they thought that this was the last cry of the zealot. But we underestimated the fact that there are lots of people with time on their hands that have no problem harassing advertisers, telling that the Rabbonim will come out against them for advertising with VIN. I speak from experience with at least organization that was harassed and maybe even threatened that if they do not take down their ad from that site that the Rabbonim will be informed, and that the Mossad will lose its Rabbinic protection - which it very much needs, due to the nature of the activities that it engages in. Sure enough the ad was down soon after that phone call. They too were not aware of the fact that K"K was a serious one, and that the site was being watched by "Askoonim." It was that incident that made me pay attention more to the news and advertising content of VIN, and I soon saw what any of you can see, if only you pay attention closely.

So the fact that they ignored two "juicy" scandals - and I won't tell you what they were - tells me that they've noticed too, and that they're paying attention. They didn't just "miss them." But I believe that it's too late now. I say that they'll never recover. Check the stories they bring; they hall have 0-5 comments, no more. It's all cut and paste now from the AP and other news agencies, and most people don't need VIN for that, they have all the news sites, and even the squeaky clean Yeshiva World and Matzav for that. With readership down advertising rates will go down, and that'll be that. So we can clearly say and see that the kanoyim have won. VIN made lots of enemies over the last few years with all the scandals that he printed and allowed in the comments, and they'll find very few sympathetic ears to their cries. I would not be surprised if some his victims were the ones that spearheaded the campaign. So you heard here first, folks. Remember that when he closes up shop some time soon.


Satmar has always "suffered" from this affliction; they always knew what the other guys need to do based on what HIS seforim say. Like I was told recently in a comment, that I should "l'shitoscho" when arguing a point, and that Satmar does it very well. They tell the Lubavitchers what the Rebbe Rashab wrote, and the Belzer what the Rebbe Reb Soocher Dov held. The SatmarRov tried to convince his son, The Holy Reb Ahron Belzer that he wasn't acting in accordance with what "Belz" had opined pre-WW2. Recently the Belzer אור הצפון publication has irked the Satmarer more than usual, and they decided to take action and attack. They used their "big dog," Menashe Fulop, who they all loved when they were all one team, but npw that he's on the "Zali" side has very few admirers left. The circular and irrelevant arguments and logic used here should be made into a case study of how NOT to argue an issue, question like "ווי קען מען זאגן אזא זאך אויף דער הייליגער רבי ישכר דוב?" and others like that don't win arguments in the face of facts on the ground, but that doesn't keep them from "keeping on keeping on."

Last of the Babruiskers (in America) 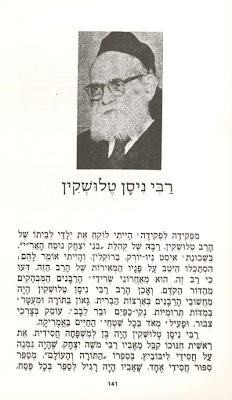 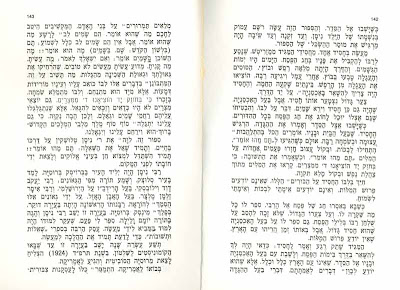 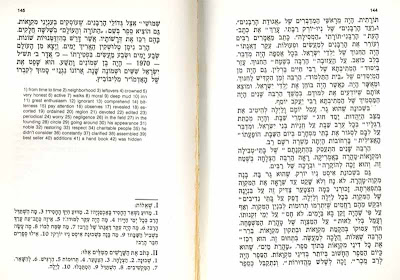 a.k.a. Rabbi Freifeld's Rebbe, those of you who read Yisroel Besser's classic know about Rav Telushkin and how he and his shul in East New York Gubernye influenced young Shlomo. 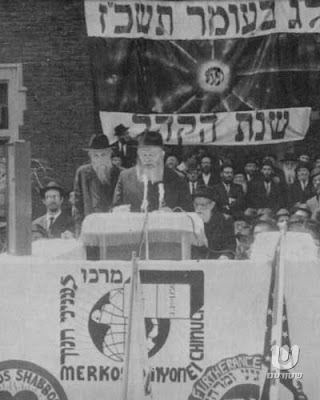 and yes, er hut gehalten fun Rebben.... I say that because I know somebody will bring that up, so I head him off at the pass. 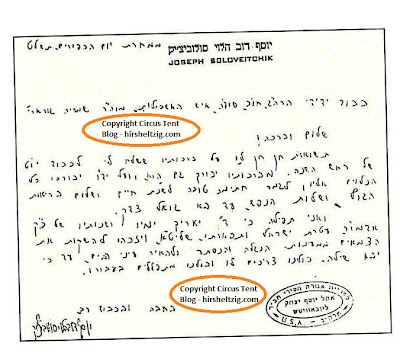 It's busy season at the moment, so you'll need to excuse my slow pace of writing these last few days and weeks. For now, take this. It's interesting to note that RYBS would write these words in a letter to RaSHaG, not the Rebbe... Which makes doubters like his son Hayyim and others look silly when they say there was no connection and that Lubavitch propagandists were the ones to "create" it based on circumstancial evidence. It would seem that RaSHaG probably wrote about the Rebbe in his letter to RYBS, but I could be wrong.
Posted by Hirshel Tzig - הירשל ציג at 1:26 PM 50 comments:

The Story behind the picture 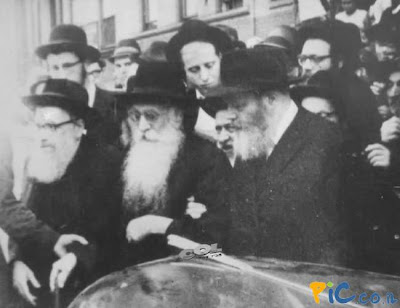 Are all the facts listed here correct? Anybody? I did not know that the Horenstein to whom's levaya the Rebbe went to the East Side was Mendel's brother. I also think that the Rebbe was so concerned about whether or not the Boyaner Rebbe - or Chassidim, rather - allowed for their Rebbe to be touched, shows his concern and respect for the minhogim of other kreizen, as well as the privacy of another human being - if I may so myself.
Posted by Hirshel Tzig - הירשל ציג at 11:48 PM 52 comments:

"The Rabbi of the Homeless" 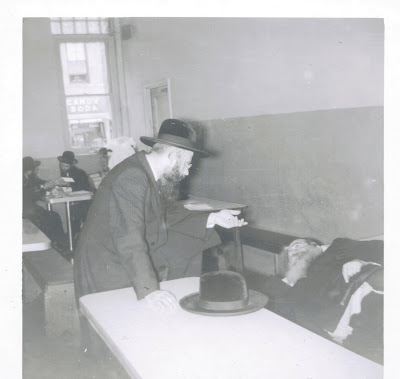 Rav Yehuda Tirnauer, z"l, with a meshulach in the YCS lunchroom, circa 1959. The young man on the right, in the background, is Reb Nissen Neiman, Vizhnitzer Dayan.

The man who sent me this picture, sent it on the condition that I name this thread like that, "The Rabbi of the Homeless." At first we thought that this picture illustrated that idea perfectly, but then he realized that it was a meshulach resting on the bench after a filling lunch. I wasn't aware of that aspect of Rav Tirnauer, who passed away 2 weeks ago, despite me growing up in BP, and despite the fact that my zeide would attend his shiurim daily after he retired. But this is the case, apparently. In Yeshiva Ch'san Sofer on the LES, many of the bachurim were either born during the war or immediately after, and some had parents who could not relate to them. These boys needed a man who would listen to them, and RYT was the man. And that relationship lasted for decades and spanned generations, not just while they were in Yeshivah. Many of these men continued to seek and heed his advice even when dealing with their own children and the issues that arise with raising them. Which makes you think that maybe the fact that so many homeless Jews found a quasi-home in the basement of Shomrei Shabbos shul, where RYT was Rov, was no coincidence after all. 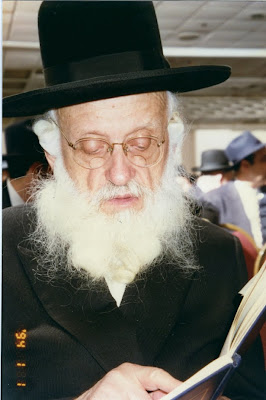 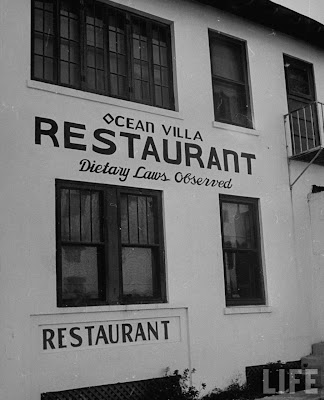 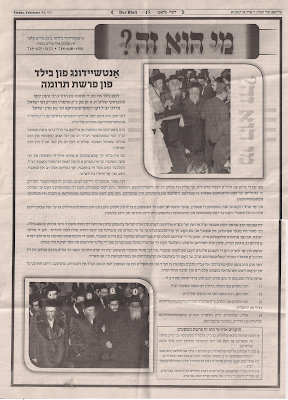 A clipping from last week's "Der Blatt" newspaper, published by the "Aron" faction of Satmar, where they bring a picture and ask you to solve the puzzle. I think I know who the current picture is from as well, but let's focus on the picture at the bottom of the page, the one that they describe here, very nicely, if I may say so myself. We brought that picture a while ago and discussed the wedding a bit then as well. 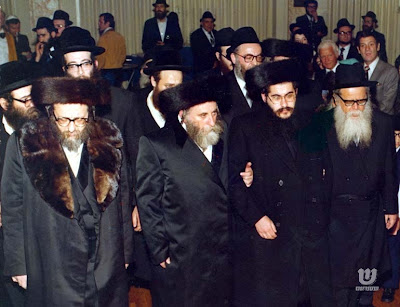 What You Can Do At The DMV

Now, you too can waste precious time better used to learn Torah, spend time with family or make money and plan the personalized license plate you know you'll never get because you're too cheap, or simply don't have the cash! Just remember, many of your dream plates are already taken or are not allowed by the DMV... I chose to display here many of the topics that we discuss here on the tent, whether very recently or in general. I know, I know, I could've done hundreds of different things too, but I don't have that much time. Send us in your suggestions, pictures, that is, and we might just publish them! I actually saved some more plates, and maybe I'll add some later, who knows?

The Author of the Tolner Wikileaks as he was - and is known in Ger, even after becoming Rebbe, and especially now that he's embarrassed them for all eternity.

Last of the Kopusters... And where Lubavitch got lots of Chassidim from.

Land of the Free and Home of the Brave

A Yeshivaman, one who toils in Torah despite all the hardships...

What we should be doing, but are too busy to...

It's not really alive, is it?

I should get a set..

The man which the world was created for

Srool or Mendel, which one do you like? Or are you Monsey?

What we all need to do more of

A shtarke guy who learns in Kolel, for the time being, anyway

The Shchunah where it all happens

The day that it all began

The one we love

An old time talmid of Reb Aron - or a wannabe from Lakewood.

A great book about a great Chossid

כל השביעין חביבין - and now we know in Ger too!

That "tekufeh" was way too short

Not to be confused with Spinka 56, or maybe it's the amount of Spinka Rebbes?

The Yeshivah on the hill, and on the rocks, as well....

The one you know you love and need more of...

A happy day - or "El Naqba," depending where you stand on the issue...

Ch'sidish can mean lots of things...

Imagine if that would happen...

No, there are no letters missing here - that's the word

His whole being is "anti"