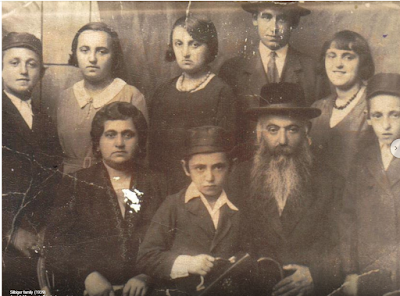 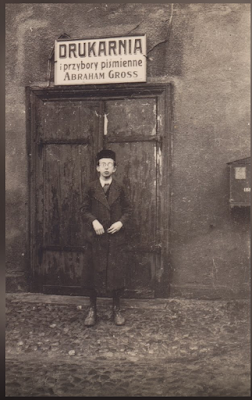 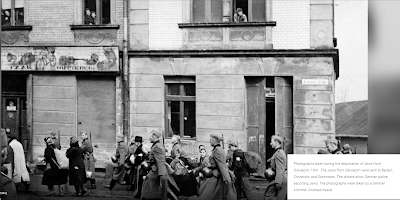 In the final photo - aptly so - we see the Jews being driven out of Oswiecim to one of the Ghettos mentioned in the caption. The neighbors are watching from the windows, they seem to be OK with it, we can maybe even detect a smile on some faces. If you'll look at the building on the left you'll see a sign for a bicycle shop, with the name Izak Hutterer. Some of you may have heard of the famous Bobover Chossid Reb Shaul Hutterer. He lived in Antwerp after the war and passed away not so long ago. He would come to NY to daven for the amud in the Bobover shul. He was from Katowiec but he had an uncle in Ushpitzin by the name of Yitzchok. I would assume this was his shop.
Posted by Hirshel Tzig - הירשל ציג at 11:31 AM 27 comments: 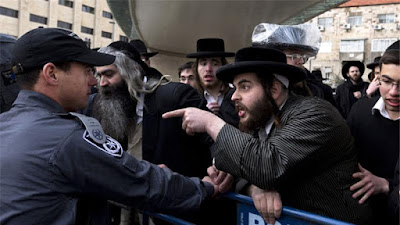 Click here for an interview with Mr. Tzvi Aldroti.

You don't know me, but people who know me say I have too much rage and I have to stop already, since we live in a great multicultural world and everything is peaceful and tranquil. I just haven't seen it yet, but that's how it is. Maybe it's my age, or where I grew up. Yet, before I realize what everybody else has already I have something interesting to point out. The Satmars are famous (or infamous) for their protests to fix Israel's ills (which was - in my humble opinion - just a ploy by the Satmar Rov to get the Pupa Ruv and Tzehelemer Ruv types on board of his political protests. He knew they were lovers of Israel.) Take Reb Yoelish's fight against the mixed swimming pool in Jerusalem, the mixed pool on Bedford Avenue corner Rodney in the YMCA - right in front of his nose - bothered him very little. Only the mixed pool 3,000 miles away outraged him obsessively, (they write in the new foreword of על הגאולה ועל התמורה he poshut got sick from it) at the same time you see the Lubavitcher Rebbe trying his best to change the whole Israeli PUBLIC SCHOOL system from learning co-ed. Speaking to anybody and everybody that could have any influence over there. Obviously the Rebbe got nowhere, as the the Leader of the 11211 community got nowhere either. But you detect a real non political pain from a erliche yid - if nothing else - and not trying to win points with anybody.....
Posted by Hirshel Tzig - הירשל ציג at 11:00 AM 38 comments: 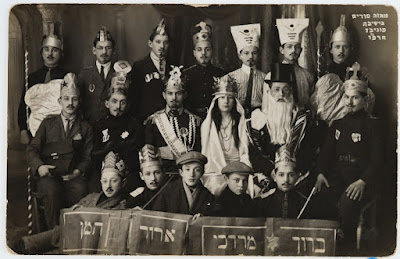 No, they didn't make mixed plays in Ponovezh back then, no matter how you wanna believe that. But it is a man dressed up to play the part. And I would need to say that the Ponovizher Rov was OK with it. That wouldn't fly today either. Somehow we've "progressed."

Zupnick was a businessman from Czechoslovakia who was here in the US when the war broke out. He was thus stuck here. He had applied for visas for all of them to emigrate in November of '41 but Pearl Harbor (Dec. 7, '41) kept them from being delivered. The folder is full of cables and letters trying to get any help he could. Ultimately he learned that they all perished, hy"D. He remarried but died childless. In between he helped build many of the Satmar Institutions in the US, as well as Charedi Eda Chareidis mosdos in Eretz Yisroel. 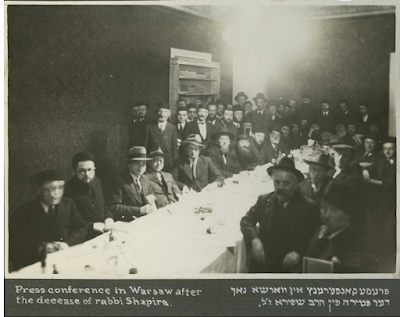 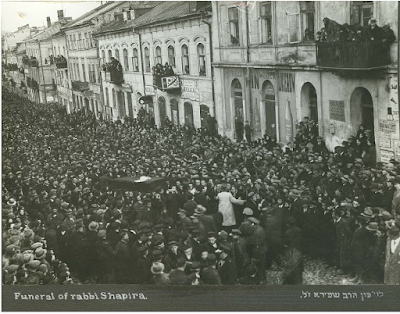 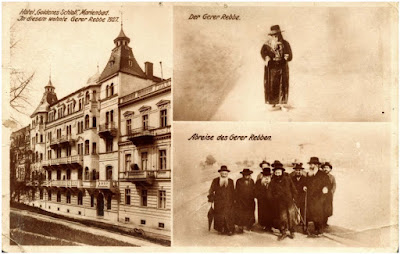 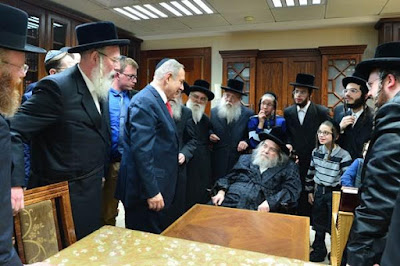 So what did Kamenecki teach us in MOAG? That all the Litvishe Rabbonim were נתפס למינות ולציונות? And that Reb Chaim Brisker trusted none of them? I guess the only non-tziyoni was Reb Yitzchok Elchonon? The NeTZIV partially? Or do we just say that the Mizrochim hijacked the Gedolim like RYES and RNHB. Whatever. It's a nice bit of history any way you טייטש it. 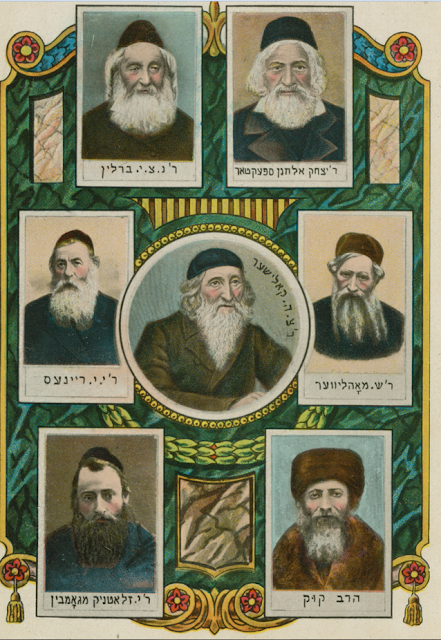 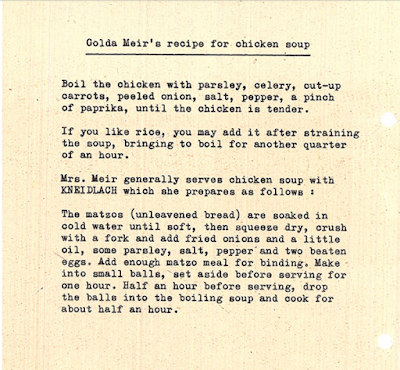 Did Reb Moshe Shapiro ever sit down with רבי יואל כהן or any other ליובאוויטשער חסיד? 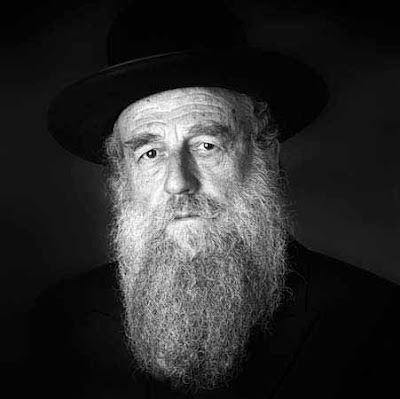 So we discussed RMS yesterday, backdating the post to soon after his passing. I got all kinds of messages, both here and in private, how I was asking a silly question re: why did he never mention Chabad. He learned and loved sifrei Chabad but never would he mention them by name in public. The more respectful ones will tell me that it wasn't what he was preaching, so if he did mention Chabad he would use pareve terms like צדיקי אמת or מקובלים. He was a Litvisher, so why mention Chabad. OK. Whatever. Others, those who have big mouths, speak how "today's Chabad" was a "perversion" of the REAL Chabad. As if. As if he knew. As if he ever bothered to speak to anybody in Chabad. I mean it's nice that he discovered a whole new world in Tanya and Likkutei Torah, but just like every other limmud you need to have a Rebbi. Don't think you know just because you have a good head, and then go and dismiss thousands of others who follow a mesorah for 200+ years. Did you ever make an appointment with an "expert" in Sifrei Chabad who has a mesorah and discuss with him, try to learn from/with him? And if you think you can do it on your won what does that say about you?

Then I wanna know why someone like our friend "Litvak from Budapest" (what's that?) who says that the Leshem held that Chabad was megashem lofty concepts and that's why he didn't mention Chabad, so why learn those seforim at all? The Leshem was totally opposed to Toras HaChassidus from the BeSHT on, שרק those that claim to follow his teachings are allowed to learn Sifrei Chabad? שפת אמת? ר' צדוק? שם משמואל? And in Chabad גופא - it's only the later doros that were meGashem? So תניא-ליקוטי תורה is still allowed? like where did it start? the Tzemach Tzedek perhaps? Was he meGashem? Litvak, you consider your self a rational person, is that what you believe? And what does to be MeGashem mean anyway? Where do these people get these ideas, and why do sane, rational people follow them?! Just because he's a little out of the box and speaks of new concepts? II guess so. It seems to me that they've remained very much within the box of anti-Chassidus, despite all the learning.

The answer is very poshut. At least for me. [I was thinking of bringing R' Eli Weintraub into this discussion, because he was a similar person. He learned Chabad and would even mention the source, but he too somehow "understood better."] To learn Chassidus and be a gantze mentsh far zich just doesn't exist. Chassidus is bittul. If you learn and internalize you become bottul. You can teach but it's not about you. The examples are numerous. Too numerous to mention. The examples even go as far as people who do make it about them have a very hard time teaching Chassidus, because it just won't "allow it." So people who become "Gedolim" based on teaching מחשבה and becoming ענקי המחשבה - that doesn't jive with Chassidus Chabad. So much so that they can't even mention sifrei Chabad - almost as if the seforim itself won't ALLOW themselves to be mentioned... Then there's a side issue I have with many of these same personalities, how they all somehow manage to hook up with the adversaries of Chabad Shluchim and become those who put them on the map. Especially in places like the Former Soviet Union, וד"ל. But that's for another time. יש עוד הרבה מה להגיד. 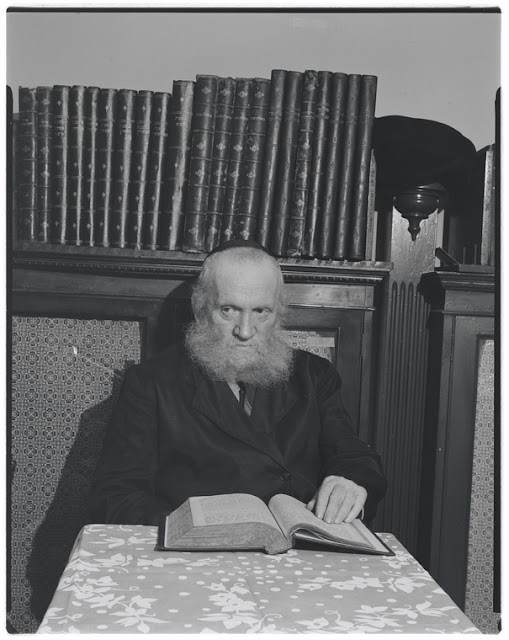 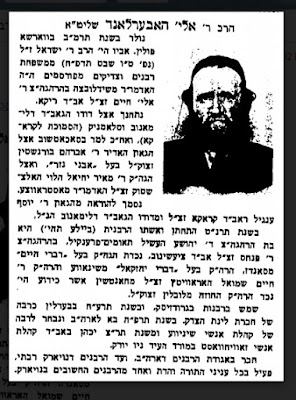 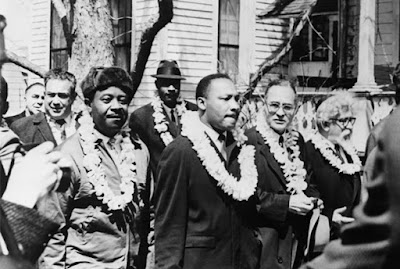 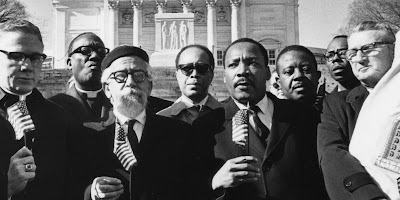 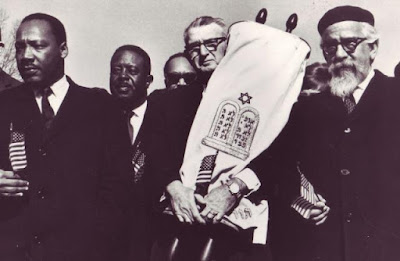 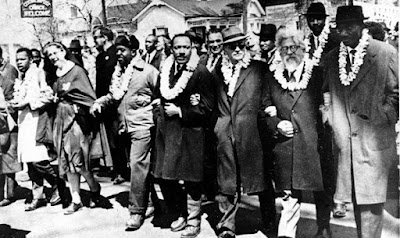 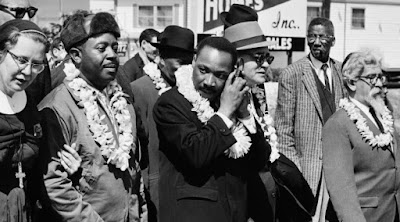 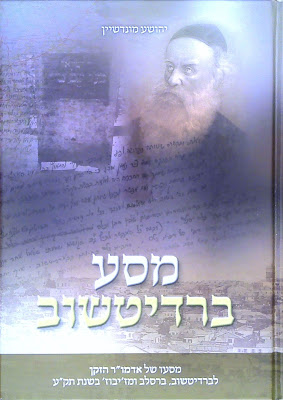 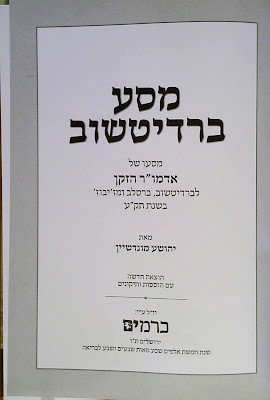 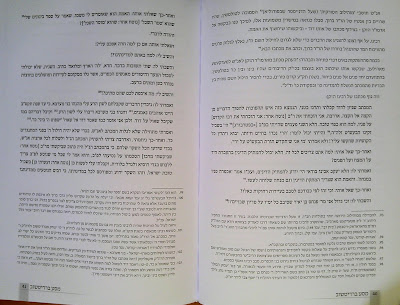 Tuvia (from Tuvia's) at his sheva brochos 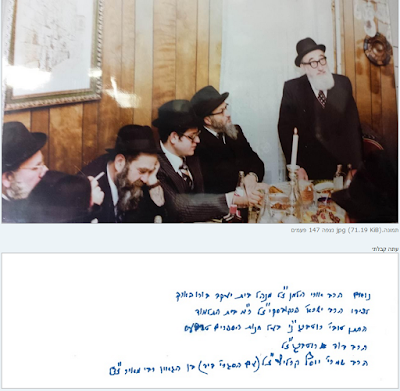 I remember Reb Shmerel Karelitz (pictured here with the cigarette) from when he lived in Boro Park. He would daven in a local chassidishe shtiebel (השם שמור במערכת) and we looked at him a little odd. Because in our little minds all that was important was how you looked and dressed. And he looked a little different. We didn't know who he was. Wore a frock but like with patent leather shoes. Whatever. Strange what sticks in your head after all those years. Why am I speaking about that side note when it's supposed to be about Tuvia Rotberg, last of the Litvaks?
Posted by Hirshel Tzig - הירשל ציג at 2:55 PM 4 comments:

I'm not c"v here to speak ill. I saw the obituaries in the sites and the newspapers, and the plagiarizing one from the other. I saw the התפעלות that he knew everything by heart. But I'd like to know מה טיבו. It seems to this uneducated blogger that any Litvishe Rov/Rosh Yeshiva/Mashgiach that speaks about anything outside of the norms is considered a איש מחשבה and then some. It also seems to me that they're willing to learn and disseminate RaMCHal, MaHaRaL, GRO, and even Pareve Chassidishe Seforim like Sfas Emes and Shem MiShmuel, which the Litvish like, for some reason. But of course they'll never venture into the more defined Chassidishe Seforim, and of of course Sifrei Chabad מאן דכר שמיה. About the niftar they say that he knew Tanya and loved Likutei Torah in his personal life, but didn't teach or preach it. I just wonder why that is? If you're searching why not do a complete and thorough search? I attach a hesped - pretty short, by Reb Michoel (Mickey) Sorotzkin, son nephew of Reb Boruch of Telshe-Cleveland. I guess I chose it because it's in a calm tone and relatively short, no other reason. 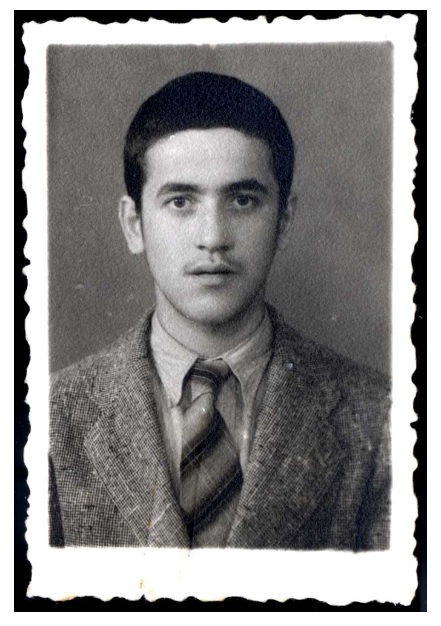 Nachman Elbaum, one of the Teheran Children who arrived in Mandatory Palestine in 1943. Reb Nachman was a brother-in-law of Reb Chatzkel Besser. They were married to two sisters, daughters of Reb Berel Ludmir, a descendant of the Alter Rebbe. 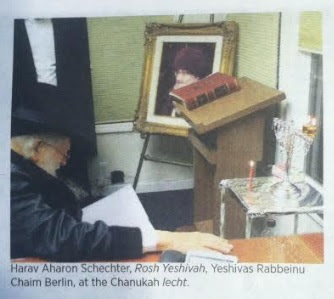 We all need it. Inspiration. For some of us it comes in the form of a sefer. Connection to words. For others it's ראיית פני הצדיק that puts either יר"ש or אהוי"ר in our hearts, depending on what's called for. It seems like Reb Aron likes to have the Rosh Yeshiva's ציור next to him by the חנוכה ליכט. The Shabbosdike ציור - that does it for him.
Posted by Hirshel Tzig - הירשל ציג at 11:00 AM 4 comments: 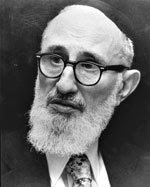