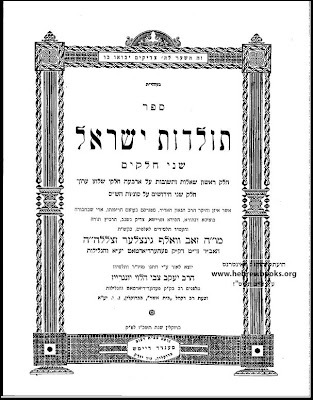 My Zeide lost his wife and 4 children in 1944 at the hands of the Nazis yms"h, and started all over again in the DP camps. Upon arriving in America he worked hard, very hard, and even after being robbed blind by a business partner never complained. Today some of those jobs he worked at might not sound so "respectable", especially for a Talmid Chochom, but that wasn't a problem for my Zeide. He may have worked to provide for his family, but his eyes and mind were always in a Sefer. He would arise way before dawn to learn and give Shuirim, and was back at the Gemoroh upon returning home. Upon retiring he spent his time in the Bais Medrish.

Zeide was a Talmid of the VaYaged Yaakov of Pupa, who passed away in 1941, for a short time, and then, for the most part, a Talmid of Reb Zev Gintzler of Solgotarjan and F'Gyarmat, Hungary. A point about RZG's dedication to his Talmidim, and in turn their love for him, is made by the fact that when RZG was offered the Rabbinic post of F'Gyarmat ALL OF HIS TALMIDIM WENT ALONG WITH HIM TO THE NEW TOWN! The Yeshiva was restarted in his new place of residence. Unlike other Yidden his age and of his background whose children/grandchildren chose to "join" Lubavitch, he would tell people he would meet with me that דאס איז מיין אייניקל, ער איז א ליובאוויטשער חסיד, "די ליובאוויטשער רבי איז געוואלדיג גרויס, That, in a way, gave me the Chizuk I needed during those turbulent times. While bedridden the last few weeks of his life, his lips did not cease to murmur words of Torah and Tefilloh, and he passed on B'Misas Neshikoh on Erev Shabbos Kodesh, 6 Nissan 5754.

I wrote most of these words three years ago on his Yohrtzeit, yet they still ring as true as ever now. I thought about him a lot recently, and how his presence is sorely missed. How my own children would've benefited greatly from him and from his old world character. The fact that he had to start all over again basically made an entire generation miss out on learning from him. That is another great tragedy that often gets overlooked when discussing the holocaust; the fact that then you could only enjoy your grandparents when they were elderly. Today you can have a young, vibrant zeide in his 50's teach you and share with you. And bubbe as well, of course. Anyway, I wish I could've made it to the Beis Olam today, and I could have really, it's just that TODAY of all days I FORGOT! The only reason I remembered was that I saw mention online of the Floral Park cemetery where he's buried! I could cry right now.

beautiful, touching tribute. perhaps your not going and forgetting has brought you closer- the depth of your pain is more telling than a mumbled kappitel tehillim and cursing the traffic.

IIRC my zeide was in Pupa for only one zman. He had his Bar Mitzva there and the VY put tefillin on him (Nusach Sfard, despite his father wearing and davening ashkenaz...)

After that he left Pupa, despite his Rebbe the VY saying that the very much wanted him to come back.

I believe RZG was a Munkatcher Talmid and Chossid, but I could be wrong.

Very moving portrait of a shearis hapleitah Jew.
May I make a few comments firstly in Hungary unlike Lithuania after WW1 the yeshivas were not communal institutions , they were the private talmidim of the rav unlke Da Mir or Radin where the yeshiva had a hanhola and were more than just local schools. Thus when the rav in Hungary moved his talmidim ALWAYS went wirh him , few stayed to learn under the new rav even if he was a "tefes yeshiva".
I have to say the next thing, since you mention it, that you could only enjoy your grandparents when they were old.You will please excuse the personal tone.
In the case of my parents and their few survivor friends from Lithuania ,Poland, and White Russia which children had grandparents bichlal, which 2nd generation children from these countries knew their grandparents?
Thus while the Hungarian Jews suffered and were killed (yet 50% survived )their Holocaust narrative is much different than that of the Jews of Poland, Lita, White Rusia and the Ukriane.
My father was in German incarceration (Slave labor and death camps) from Oct 1939-April 1945 and my mother from Aug 1941-April 1945. I am lucky that I have even 1 photo of my maternal grandparents.Not one of my parents siblings or parents survived and thats true about many of the survivors from Poland-Lithuania.

I do realize that about grandparents, Reb Schneur.

Hirshel ,
Did you or your family shteig in ruchnies by making the switch to lubavitch ?
Is your family in a more yidisher environment because of your switch to lubavitch?
How is your families level in yidishkeit in comparison to other grandchildren of your great zeide ?(if there is any GC )
how would you compare the level of avoides hashem of any rav toifes yeehiva in pre war Hungary to the ReYatz or ReMaSh?
Would you as passive as you zeida if one of your children switched to a different kehila outside of lubavitch?
I will learn a whole perek mishnayos L"EN your zeida if you answer some of the above

fair questions respectfully presented. I'll get to them soon, bl"n.

Curios
What is your barometer for avoides hashem? crying by the Seder Nacht and by the Tekias Shofar deroshe? On that every hungarishe revel competed with any Rebbe outside of Mozheroi border they definitly beat them to death, eventough there was some crying going on in lubavitch by the Seder(heard from Hagoan Reb Yisroel Friedman Shlita who was by many sedorim bbeis rabinie,he remembers once the deep crying by Halel by the words Sabini Kidvoirim and he explained the biur in Likutie Torah on these words)and by the Tekias shofar. Obviously the rabonim of hungary that converted to chassidus had a certain soul yearning that is hard to describe for a Ish Megushem

The problem with Lubaitch is they expect everyone to believe the romantacised version that they sell, yet point out and 'live with realities' of every other kreiz.

You can't have it both ways, even though you are relatively even handed.

You write = "wish I could've made it to the Beis Olam today, and I could have really, it's just that TODAY of all days I FORGOT! The only reason I remembered was because I saw a mention online of the Floral Park cemetery where's buried! I could cry right now."
are you disconnected with your family?
if the only way you were reminded about your zeide is by the web I think you should quit surfing.

We don't all live together. We work all day. Simple as that. We used to travel together to the cemetery, but that doesn't happen all the time anymore.

Besides, if the web reminded me why should I stop?!

Curious reader has some very valid points, I would really love to hear an honest answer, it is something I think about all the time, the mesiras nefesh (sacrifising you and all future generations) for the sake of a greater cause, the emes is very costly at times, the question is, is it worth it? I'd love to hear what you think.

I'm working on a post that hopefully will be up soon and will answer all of the questions.