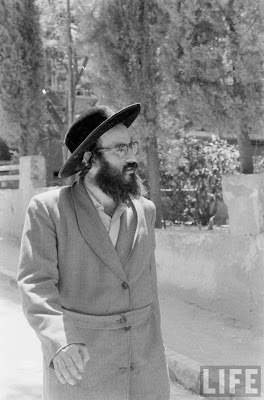 This was part of part 12 of Elozor Reich's letters, but I separated it due to the length of that letter. I figured most of my readers have a very short attention span...

A note to my readers.

The last letters published in this series were from late 1954. Although I remained in Chevron another few months, the few letters that I have to hand from that period mainly concern my plans for the future. I had wanted to settle in EY and go into the seforim publishing business but........ What follows is a current reconstruction of the essence of a mislaid letter from February or March 1955, and with this I conclude.

[Although I had received Semicha whilst still in Gateshead Yeshiva from Rav [Shmuel Yosef] Rabinow, my parents were keen on my harvesting an "Eretz Yisroel" Semicha or two. My original plan had been to try for one from R' Isser Zalman Meltzer. However, as I mentioned in an earlier letter, I only managed to see him once before his Petirah. At that time most Chevroner bachurim considering rabbonus (and there were few who weren't ) went to Dayan Eliyohu Romm, a distinguished Talmid Chochom, who showed considerable regard and benevolence to any Yeshivah Bochur of promise. After some late-night revision, getting the treasured certificate from him was not too great a struggle. With this in my pocket I thought I may as well get a third. The Chief Rabbi, Yitzchok Herzog, may not have pleased some Charedim with his political views, but all acknowledged his Geonos. I was told that he had ceased giving Semicha, but thought it worth a try. I had some protektzia as he had known my grandfather, R' Eliezer Adler, the long time leader of the Gateshead Kehillo, and had been friendly with my parents, who urged me to persevere. At that time, before Purim 5715, he was officially "out of town" recuperating from a bout of ill health, but I discovered that he was actually resting incognito at Pension Reich (no relation) in Beth Hakerem. 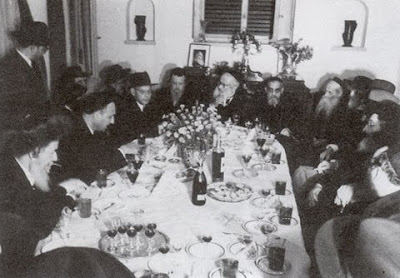 A meeting at the home of Rav Herzog. We see the Tchebiner Rov, Rav Isser Zalman, and Rav Chaim Leib Auerbach, among others.

With some difficulty I made contact with him and was told that it was a two stage exercise. Firstly, I had to be tested in Yoreh Deah and Shulchan Aruch. This part he delegated to one of his Dayonim. I was told that if and when I succeeded in that stage, I should come to see him for a general Farher (exam). The nominated Dayan I would find, he told me, in a certain shtiebel in Meah Shearim. “Ask for R' Yosef Sholom Eliyashiv “- a name new to me - he said. Rav Eliyashiv, without further ado, put me through my paces for some hours and told me to come back the following day, when he would give me a letter to take to Rav Herzog. When I duly went to see Rav Herzog he was resting in bed, learning from a pocket-sized Gemoro. He opened the sealed envelope from Rav Eliyashiv, made some flattering comments about its contents, but sadly retained it in his pocket. Passing me the small Gemoro, he asked me if I had ever learnt Meseches Erechin. When I answered no, he told me to sit in the armchair, learn such and such a Daf, and when I thought that I had mastered it, I should let him know. It did not seem to be a particularly difficult passage, but when I told him I was finished, he used it as a springboard to go from one Talmudic topic to another for a long long time. Suffice to say, I have Rav Herzog's certificate to this day, but not the one in Rav Eliyashav's hand.] End
Posted by Hirshel Tzig - הירשל ציג at 1:12 PM

O vey, Rav Elieshev had anything to do with the Trifene Rabinate, it cant be its a lie.

Tzig,
You know you are a stinking ingrate,don't you?
Well, actually I"m sure you don't.You think you are the biggest tzaddik in the world and the self annoInted Shlit'a is Nosi Hadeyr and Moshiach, and, and everything else.
Anyway, what I wanted to say was that you used Elozer Reichs letters, plastered everywhere on the web about it, "tchepped" with him about not giving the Shlit'a religion aka Lubob enough respect
BUT NOT ONCE WAS THERE ANY ACKNOWLEDGMENT OR THANKS TO MR REICH!!!!!!
I'M SURE YOU DID NOT EVEN GET PERMISSION TO USE THIS!!
Dude, you are one lowlife scumbag dawg!And a stiNky Lubob to boot!
INGRATE*INGRATE*INGRATE*

Mr (Rabbi after the semicha we now know he had) Reich never sent me the letters. I got them from a reader. I guess every reader in the Jewish Tribune needs to send him a personal thank you as well. I suppose you need to thank him too, since you read them here too.

Ingrate, if you don't understand the difference between reading the letters or reproducing them as a way to boost your blog you are way dumber than I thought you were.
I know that for ingrates and other vermin and lubob it's difficult to say thanks.

whatever you say, duuude.

Just because you are illiterate, (in a number of languages) you don't need to demonstrate the fact by inserting a superfluous (and insulting) "sic".