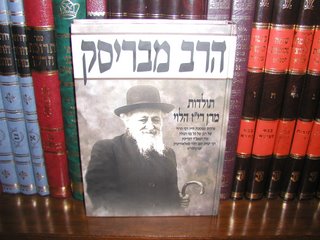 (That's my ספרים שאפע if you're wondering. Yes, we do have Nigleh Seforim)

On Yom Kippur during Krias HaTeyreh and throughout Sukkos I perused the new book, הרב מבריסק" - חלק ג" and noted a few things.
The book, and subsequently it's predecessors Vols. 1 and 2, is juvenille. ( a review on the first volumes will follow PG) Note to the author: When you write a book about the life and times of a person please don't put every person and movement you disagree with into quotation marks, it makes your book look like an editorial from Der Yid and puts your objectivity into question.

The Rov's battle with Zionism, a worthy cause indeed, seemed to be become personal with him, and to this reader it seems like he was obsessed with their every move. words like "זיי מיינען" AND "זיי ווילען" were always on his lips, as if he was watching their every move and it had become some sort of contest. His reluctance to participate in הפגנות against the Government's decisions was based on the fact that his father Reb Chaim said that the ציונים זענען חשוד אף שפיכת דמים, which may have been the case, and therefore there was no need to be "Moser Nefesh". By the way: does this "Vort" refer to all Zionists? The Brisker Zionists? Any Zionist of any time? The question remains.

There are also parts of the book that are downright embarrassing to the entire family, including Reb Chaim and Reb Velvel. Meller, in the chapters entitled חנוך לנער, makes mention of the great effort that the BR made in the education of his children, and in the great success he had at it. It seems that corporal punishment was a major player in that process, with the Rov and Reb Chaim both using פעטש as a means of educating and punishing. Now, all this may be good and well, but do you really think that the family would like their father/grandfather to be known as a שלעגער?

I do believe that the author Shimmy Meller, - who strangely also wrote about the Chevroner Rosh Yeshiva Reb Simche Zissel Broyde - does the house of Soloveitchik a great disservice by publishing these books because he breaks the mystique that has engulfed Brisk for the last 60 years. He does however have some great pictures that some of the great Gedolim in Eretz Yisroel would rather he not have published, but that's beside the point....
Posted by Hirshel Tzig - הירשל ציג at 11:48 AM

That's all you have to say about it? How about some of the teichen?

Also, why should they be so embarrased about use of corpral punnishment? Who didn't use it in those days?

And YOU think he did them a disservice by breaking the mystiqe? C'mon Hirshel, you must be kidding...

I can sit here all day and write, I just don't have the time. Besides, there IS more to come. This is only part 1.

Have you ever seen anything like that in any of the recent biographies, where the author speaks of CP?

I really do think he does them a disservice.

HT - you now subscibe to political correctness and the thought police?

no Zez, I don't, I just don't understand why this is important to write. From Meller's POV this is probably a הוראה that we're all meant to beat our children!

Lately brisk became like a chasidus meaning that they imitate every stupid move of the Rov, and no changes can be be made, like R, avraham yeshoya doesnt speak on a microphone, because the father didnt talk, it is full of nonsense,the irony is, that reb chaim was the biggest revolutionary, in his style of learning and in his style of psak with no big loyalty to shulchan oruch, as klal yisroel was doing for genarations before him, and his family became so rigid, putting themselves in a box,

Tzvi, it looks like you are not getting it, the meller publications is part of a long soloveichik turf war between the uncle reb dovid and the nephew reb A J, the latter is big into being protective on the family clan and its secrets, only if you realy lick his .... he will throw you some snipets, the uncle is much more marure then this,

I understand the turf war, although I don't understand how AJ thinks he's the Mamshich when his uncles are (or were) still alive, especially a Zoken like Reb Dovid.

in brisk they are into believing that they are the matikie shmua from sinai(see hakdomas harambam) and reb velvel got it i from reb chaim and then reb berel and then AJ, eventough reb moshe was older then reb velvel and much greater goan,and in our times reb dovid, but the hashgacha elyono wanted the chain should go thru reb velvel so on and so on, awhile back M Gerlitz wrote about this briker belief system in a forword to reb chaim on bava metzia with some Kameneczki baba massai and then he was refuted in Yated,

If anybody thinks that Lubavitch has cult-like practices, you haven't seen Brisk. Everything from the silly Kaskets they wear, then the grey hats, then the black hats, then the black round hats, to the so-called traditions that have zero basis in Halochoh like eating on all Taneisim save for Yom Kippur and 9 Av to davenen Beyechidus, to burning their Matzos to a crisp. it's like it's some kind of voodoo.

every pipsqueak goes around saying that he does what the Brisker Rov told him, and they end up making him look like a very confused fellow. even Rabbi Shach speaking in 1990, when he was justifying the 2 year-long hatefest that he had started (Degel HaTeyreh) also justified all his political moves and said that the BR knew that he went to vote in the Israeli elections און ער האט מיר קיינמאל גארניט געזאגט! איז א ראי' אז איך האב געמעגט! He also said it about going into the Moetzes, that the BR gave him the OK. I'm sure the Soloveitchiks were very happy about that.

Pictures can be deceiving, especially with the bad lighting featured there. Not to toot my own horn; But if only you'd see what kind of הארעוואניע over Nigleh goes on at that table.

With the kids, (after I beat them Nusach Brisk) without the kids, and everything in between. I'm an עניו so I won't go on about myself, but you get the point.

Tzig;
Shimmy Meller is not an historian, so don't take his books as torah misinai.He has written nice cute books with great pictures.
To give you some perspective:He is a relatively young man, about 41, and he started writing various books on Brisk about ten years ago, like the divrei torah on the parshah from R'Dovid Soloveichik.You remark that 'strangely enough he has also written a book about R'Simcha Zissel Broyde'-Since he learned in The Chevroner Yeshiva for a number of years, what is strange about writing a bio about his rosh yeshiva?Later on he studied by R'Dovid.
Btw, if you have the image in your head of Meller as a classic 'Brisker' groiseh peyos etc. you are mistaken.He is your regular yeshivah looking fellow.
You should also know that 'BRISK' with all the 'tzimmes' made out of it is an American phenomenon.Most of the best and brightest Israeli yeshiva boys are to be found in the established yeshivas such as Ponovizh and Chevron,and AFTER MARRIAGE the Mir.
When you mention that some rabbonim are 'ashamed' by their pictures in the book, surely you jest, you probably refer to them being shaven, a very common thing at the time that everyone knows about.
Btw, have you seen the book about R'Boruch Ber? The pictures are great, but again not exactly a 'history' book, also can someone tell israelis how to write and spell in yiddish!The yiddish quotes are so terrible that you need a translator to understand them.

I want to add to previous post.
Tzig, your readership is mostly Lubavitch and American and typically don't have to much exposure to other 'chareidim' black hatters or whatever you want to call them, so to make things clear, the poster who said that Brisk is into all kinds of minutiae regarding their dress:Kasketen, then grey hats etc.This is only true on the family itself (which has bli ayin hora many kids)Brisk the yeshiva(s) looks much like Lakewood, large component of typical Flatbush looking boys ,shaven etc. with a very liberal sprinkling of chasidishe guys with the levush.

obviously I speak only of "בית הרב", they would never allow others to follow the "Minhogim" because they then lose whatever supposed edge they have. לערנען קענען אלע, all they have is mystique.

Yes, you're right, I just saw a pic of Meller in the Sukkos Mishpachah and was quite surprised! A closely trimmed beard, and no hanging Peyos!

The surprise is that I see a guy who seemingly has been totally taken over by Brisker theology, including pontificating about Zionism as the root of all evil. Therefore, I'm surprised that after all that he'll still choose to write about RSZB, his former Rosh Yeshivah, a RY in Chevron, the antithesis of Brisk so to speak.

I can see however that he remained very bound to Reb Simcha Zissel, which is to be commended.

meler (it seems like a yekkish name) in his other book uvdes vhanhogoth he is not so fiesty on zionisim he has quite some liberal statements.

oh no, not in this book, he goes on and on for tens of pages about the evils of Zionism and its eventual downfall as an ideology. He even brings the Rebbe Rashab!