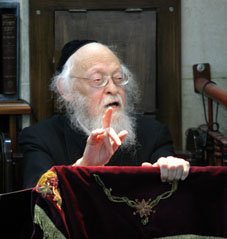 The leader of the Lithuanian haredi Judaism, Rabbi Yosef Shalom Elyashiv, joined the protest against holding the gay pride parade in Jerusalem in November.

Sources in the haredi world estimated that in light of Rabbi Elyshaiv's move, most influential rabbis of Ultra-Orthodox public will join the protest as well."

Seriously speaking this may be the single issue that all religious Jews can agree on. Let's hope they don't blow this opportunity.

Where are the Rabbonim?

Is the silence just to protect the innocence of the young children?

Where are the Lubavitchers?

since when do Lubavitchers see themselves as the protectors of Judaism like the holy rollers do?

All of a sudden you need Lubavitch to do your dirty work? go do it yourself!

"Lubavitch to do YOUR dirty work".

Oh! I get it. So now Lubavitch has no need to worry about Jerusalem! They just have Bais Shlishi @ 770 Eastern Parkway!

You guys are really screwed up.
It's sooooo sad.

There are FAGS who will be marching 99% nude in the center on Jerusalem, and your answer is "Since when do you need Lubavitch to do "YOUR" dirty work?

Actually, the SNAG Yerushalmies are probably better off without you guys.

Stay in K'far Chabad and make Shwekey comcerts for 60,000 people.
It's more important.

Fact is most snags will do nothing since that means acknowledging the fact that there are such people. Why is this year different than other years when the parade happened? and if it happens in Tel Aviv, is that not part of פלטרין של מלך?

by "dirty work" I mean that all of a sudden you remember that Lubavitch exists? that they too can contribute as much if not more to Yiddishe society?

Why is it that R' Elyashiv looks eerily similar to Rabbi Ozdoba. it's scary.

I see no resemblance.

who's the LeUmas Zeh anyway?

To all of you that think this is an issue to bash Lubavitch you are dead wrong in this case! I can guarantee you that the Lubavitcher Yerushalmim will be out in full force at this protest. The Lubavitcher Yerushalmim has always been at the forefront of protecting the sanctity of the Holy City. Tzig, please tell your readers about Harav Tzvi Greenwald who formerly lived in Meah Shearim. I heard stories from Reb Aralach who recounted with awe and admiration the way he and his brothers would fight the police and chilonim for Shabbos. He is one of many Lubavitchers who are well known in the Chareisheh Yerushalmy circles. Guys stop making issues where they don’t belong.

The one perosn killed by Police in Jerusalem during demonstrations over Chilul Shabbos was Pinchos Segalov, a LUBAVITCHER.

Will the Haredim now back out?

In any case, the protest should be done right - a davening and tehillim rally that blocks the streets before the parade even starts. Violence accomplishes nothing (and count on the Shabak to incite violence by finding a guy who went from hashish to Hashem in 30 minutes to stab or shoot a faygele).

I found this online:

DovBear thinks the parade is a good thing....

Seeing how Lubavitch is at the forefront of the campaign for 7 mitzvos bnei noach - one of which is arayos, shouldn't they - al achas kamo vokam - be taking a leadership role in protesting against JEWISH menuvolim who are proudly dispalying thei disregard against one of the most serious issurei gilui aroyos??

I would think that Lubavitch tries to influence the individual to go B'Derech HaTeyreh. Protests like this we leave for the Kanoyim, they can do it better, if need be we can join. (Although they knew how to do it in the DP camps)However, Lubavitch doesn't have the people to oragnize it (without a directive from the Rebbe NOTHING ever happens, and I think if they did people would scream and shout how they try to grab the publicity, and they're not the BaaleiBatim.