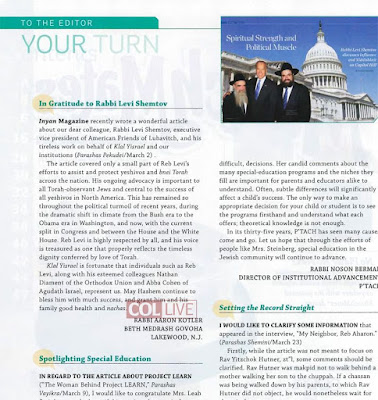 If he is a Rabbi boy are we in trouble Politician yes Rabbi ABSOLUTELY NOT!!!!

I don't know if the first comment is referring to Kotler or Shemtov.

Does semicha make you in to a Rabbi? then both are Rabbis, if not, then who many rabbis are left?

kotler,. shemtov, diamont and abba cohen have a combined total of zero accomplishments between them, unless you count getting your pic taken with joe biden as an accomplishment. where were these beurocrats on rubashkin, japan bochurim, grossman, pollard... just a bunch of hacks. that aaron is associating himself with them represents a sad day in the history of bmg and another nail in the coffin of the legacy of rav aHaron kotler.
btw, to the last anon.aaron definitely has no semicha from anywhere. he also has never been seen davening with a minyan, besides on rav shneuer's yahrzeit when he pulls into the 9am minyan in satmar, and probably has no clue which way to open a hebrew sefer.

It seems that many were upset that Rabbi Shemtov got all the credit for the Washington connections. Rabbi Kotler made sure to use his 'complimentary' letter to ensure his buddies from the OU and AI got equal credit.

Dovy
I am no Litvak what so ever, but I dont see any reason of your hurling personal insults on a Jew of Lakewood. Lubavicher Rebbe is a big boy and will survive your stupid rantings, but below the belt personal on a person with a certain last name , is low, low,low

Hurray for the CEO of BMG for running it in the American way. Business is business and trumps all politics. (I mean it as a compliment).

BTW, the Rasha"g was menachem ovel R. Schneur K. after his son Meir's petira about 30 years ago. I assume that there was some business motivation there also. From what I heard, the Rasha"g did not make a good impression.

This letter is yet another "their money is green" acceptance of a particular Chabad shaliach; hardly a blanket acceptance of the entire movement.

An Ailimisher
" I assume that there was some business motivation there also"
I believe that the Reshag went because Reb Mier had the zechia,to learn tanya by Reb Yoel by the clandestine Lakewood shiurim

Chabad is now just the WalMart of Judaism. They have everything canned at a low price, but if you want more you have to go elsewhere. And they started like WalMart by going where there was nothing - now they act like WalMart by going into others' territory with predatory pricing and deals with politicians and noise and copycat products (as well as backstabbing like WalMart did to Procter and Gamble and Unilever).

In the end they'll just choke everyone out including themselves and in the meantime assimilation marches on.

At least you can get a good deal on the simple things in life at Wal Mart. Chabad only has good deals on Fluff.