As we burn the Chometz, let's tell the people in Bnei Beraq to to cease mimicking Greek Customs... 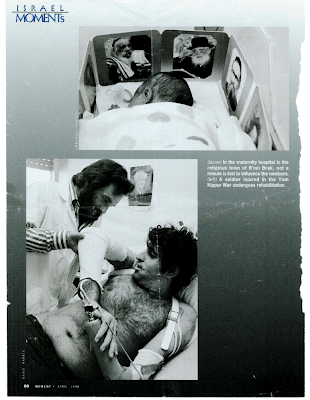 It's terrible, putting pictures of their leaders in the crib of a newborn baby, mamesh like the - Lehavdil - Greeks and Italians with their "Saints." Where did this awful "minhag" come from?! I see the Steipler, Maran, and Reb Shmuel Rozovsky, which is a bit of a head-scratcher, since he wasn't known to be one the "Gedolim."
Posted by Hirshel Tzig - הירשל ציג at 5:33 PM

If Rav Chaim Kanievsky lives for another 10 years ,you will hear "Yechi Maran Melech Hamoshiach". After all,hes Hoiga Btorah(Yearly Siyum),Osek Bmitzvos..,Yilchom Milchomos Hashem ( Various Kol Koras),Yachzik Bidka (Keren Hueer),its only a matter of time before they figure out "Haray Zeh Bchezkas Sheu Moshiach ". Shucks,I just remembered.Im too late to call in with my pledge ,to get some of the holy wine from Moron M"HM'S siyum in a little canister.Now what am I gonna drop in my chulunt and put on my childrens tongue for the next year?

where is the rosh hamamiminim berger when we need him?

the continuation of the deityfication of gedolim by litvaks.

I always though that litvish people just became chassidim and turned their roshei yeshiva into admorim, getting berochos, pushing to shake their hands; but this picture is nutso.

next thing will see is yarzeit candles with pictures of rabbbonim on them. (i know sefardim already have that.)

Azi
did you see the tent on the baal Avi Ezri kever on his yartziet?
The yeshiva world does not participate in all the Lag Beomer customs of going to Rashbi kever, but the Avi Ezri yartziet is important, I guess Nati Grossman of the the Yated need this celebration for his patty to go on.

well the little minded robotic brains of the small village sitting next to the big town of lemberg, their grandchildren put the picture of the big (60 x 60ft)shul that was located in that tiny village, next to is is the big belz shul in jerusalem. in the middle of these buildings you"ll see the picture of the present belz rebbi. (they would hang it in the sukka as well).
in bobov from where i came this is unheared of, i"m sorry some chasidic sects go to far.

the little minded robotic brains are not of the small village sitting next to the big town of lemberg, they are from the small towns near Pest who they think was near the small muddy village near lemberg

Can you stop ringing the Belz? It's beginning to sound like a cathedral in here. (Just in time for Easter too.)

Chabad were the first to Voodize Judasim with having a picture of the Rebbe in a place of warship.

Bobov
"in bobov from where i came this is unheared of, i"m sorry some chasidic sects go to far."
pictures of bobver rebbe isnt heard from? Reb Shlomele was the most photogenic rebbe after the war, I always tought that if Holywood need to act up a rebbe, Reb Shlomele would be the perfect candidate, His side locks were always so nice and neat.Mamash a Kush Tzi Ton

JJJ
what makes something jewish? I thing that if Jews do a certain thing, it is jewish.

so now putting pictures in a crib is officially Jewish

"if Jews do a certain thing, it is jewish"

a long time ago jews thought mashiach came already, today they're called Christians. or maybe they're still jews to you,

"if Jews do a certain thing, it is jewish"

So, therefore, it is a "jewish" thing to be mechallel shabbos, ocheil tarfus,...since most Jews today do these things. Great, I've got a taaveh to go out tonight for a bacon-double-cheeseburger!

It brings up a much larger philosohical/theological issue, De"Haynu , how does another Berya's relationship with God affect my obligations on this world.
I know you'll Tayneh "inspiration" U'Che'Doimeh, but all Kreizen have gone far beyond, to the point where they abrogate personal responsibility in favor of "Tzadik worship".
Now back to the studio.

Anon
"So, therefore, it is a "jewish" thing to be mechallel shabbos, ocheil tarfus"
since you asked a simplistic Shalas tam, I will answer you simple.
Chilul Shabos and Triefes are not permited in the shulchan Orech and every Jew has to follow the shulchan orech, even if all jews would do different.

Azi
"a long time ago jews thought mashiach came already, today they're called Christians. or maybe they're still jews to you,"
If you dont know the answer I will give you the answer,
This Christians did not believe in the Talmud and not in Hashem Echod as we have to follow the 13 principles.

JJJ
"so now putting pictures in a crib is officially Jewish

"
If certain Jews in Benai Berak are doing it, so it is a minhag as all minhogie Frankfurt, Fiorda... etc..
If you read the poskim you will see that alot of Minhogim are from Babushkes and the poskim honored them.

Doreish Meisim is an issur in Shulchan Aruch. Yet we see huge asifos by gravesites beseeching the decedent to intercede?

Lo sa'aseh ... kol temunah is forbidden in the Torah. Yet we distribute Rebbe cards as something holy?

BeDarcheichem lo seileichu is an issur S"A. Yet we carry out the practice of making "saints" much as the Notzrim have been doing for millenia?

You misinterpret a "Shalas tam" as a Shalas tam and, thus, prove the very point you were trying to schlug up.

not a bobov chusid said...

bobov chusid.
if i where you i would just keep my mouth shut, how can any chusid of bobov write something like this, when you always see their pictures every where?

i have seen plenty of sukka wall decorations having the picture of their rebbi plastered every where.

Anon
"Doreish Meisim is an issur in Shulchan Aruch"
in my shulchan orech OC, (I will not make a am heoretz like you get out your Yoreh Deih, that u never opened since the FIL bought it) there are 2 times that u go out to the cemetery Erev Rosh Hashana and Tisha beov, check it out, besides have u ever hear of a town that is called Miron? Did u ever hear of a Rashi in parshas
Vayechi?

"Lo sa'aseh ... kol temunah is forbidden in the Torah'
is this a issur brought down by all poskim ? or it is only a Yares Devash in his derush?BTW, do you have wedding pictures?

"Yet we carry out the practice of making "saints" much as the Notzrim have been doing for millenia?'
since you are profesor of catholic sainthood, please update me with all the catholic minhogim.

reply to azi ,so christians who believe in the talmud and do all the mitzvos and belive in hashem echod but they accept jesus as the messiah ,is that ok ? (there are christians like that )

Tzig, you don't read HaModia?
Look at the 3rd picture on page 41 of the April 6/ 2 Nissan edition.

send me the picture, please

I don't have scanning capabilities but this one's kedai. It shows how Chabad chiddushim have wormed their way in to the mainstream establishment.
Mir ken zuggen kaddish oif Lita - the yeshivisher chulent has won

so what does the picture show?

Words really won't do it justice but: Mir Brooklyn made a hachnosas S"T lz"n R' Shmuel. I don't know where this was but there's a guy doing hagboh in front of a Rebbe-size poster of R' Shmuel smiling on the proceedings. The angle(?) of the picture is rather eerie as well.
By way of consolation, this generation of Kalmanovitches have about as much to do with Lita as Lipa Shmelczer