do we encourage untruthful behavior? 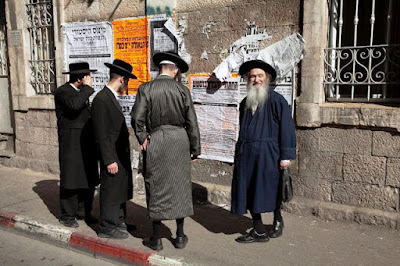 So over Shabbos I davened in a shtiebel frequented by mostly Hungarian Charedim. Nice people, friendly and all. No complaints. A lot of Chassidus Mevueres seforim, as well as other Chabad Seforim. Several Tehillas Hashem siddurim as well. The Rov is a sweet Rebbishe type. He even shows me the end of the aliya when I'm called up. A-1 service. So there's this one bochur there, 14-15 years old. Seems to be a nice kid, but his davening irked me. While writing this I'm thinking that I may have written about it once before, when I had the same thoughts the last time I encountered his behavior. It may have even been the same kid! Anyhow, most of you don't remember anyway... So this kid davens with tnu'os meshunos. Strong shukkeling. Fists clenched. Veins popping. שמונה עשרה is a long ordeal. But he seems like someone who knows from this world. clean hat and shoes, etc. That's not to say that he's a total bluffer! He seems like a kid who means well. But my point is simply that he's getting way ahead of himself! He's not at that level of dveikus, and it doesn't seem like he's ever going to be there. But in his mind, since he maybe wants to be there all the outside trappings of being at that level are justified. And in his mind this is the way to get close to Hashem! Can it be that since we allow ourselves to be untruthful, דהיינו מ'נארט זיך, in ענינים של עבודה, that it spills over to all other aspects of life as well? That we're untruthful in our business dealings or with our children and spouses? Then again, what does the משנה say? וכל מי שאינו לא חיגר ולא סוּמָא ולא פִּסֵּחַ ועושה עצמו כאחד מהם  אינו מת מן הזקנה עד שיהיה כאחד מהם, שנאמר 'צדק צדק תרדוף - so maybe he has a point.
Posted by Hirshel Tzig - הירשל ציג at 2:10 PM

Adaraba. His behavior is totally in sync with what it says in sefarim in the name of the Baal Shem Tov. Just maybe you are not the perfect Judge of how other Yiddin daven and how one's own behavior might disturb others as well despite good intentions.

Ideally when one davens, there is just the person and HaShem so they should not be concerned with other's behavior and in fact, efforts to achieve a quorum for public response of Amen might backfire if attempts to inculcate order in the shul distract those who were responding and now cannot due to the diversion.

You have joined a group, where adult men, some of them rabbis, with long beards, wear colorful kiddy kippahs, some of them with strange slogans and funny pins, yet, you see a 14 year old boy and you make a gantzeh torahs lukshen out of it?
What's pshat?
What is it about the young fellow that has got your goat, (pardon the pun)?
And pray tell, what difference does it make if a shul has "sifrei chasidus mevueres" and what does it have to do with your tale?
I think this posts is telling more about you than about the random kid.
My two cents: Let the kid be.Try and get the fellows on your team to be more normal

it has lots to do, at least in my fertile mind

those guys with the colorful kippahs? That's where they're at.

no offense, you're attacking a goat what's with צער בעל החיים ?

so are they, with all the chabad literature u have no clue on reality and how real wanna be frum people deal with it daily each his own, no furmula, no guidince just trial and error and try again, the bottom line אין יואש בעולם, thats the core difference between goy and yid, the last thing u should bash is a yud shakun to much...

1) what does a picture of mea sharim have to do with this?
2) the test if he real or phoney is what he does during חזרת הש״ץ... Does he listen attentivly or read an עלון or something which the בעל התניהi is very מחמיר about?

Woodcliff Lake, NJ - In his heartfelt public speech last night at the annual Agudah convention, the Novominsker Rebbe, R’ Yaakov Perlow, brought out lessons gleaned from an unexpected source: R’ Mendel Weiss a homeless Satmar yid who was well known in Brooklyn and passed away several weeks ago.
“He was a mysterious Jew, bedraggled…but Mendel had some interesting things to say,” said the Novomnisker.
R’ Mendel, who wandered the streets of Williamsburg for many years before he became a fixture on the streets of Flatbush and Borough Park, frequented many yeshivos and shuls throughout the area. He was known for the many layers of clothing he wore, stuffed with papers, and for the heartfelt appreciation he extended to those who offered him food and lodging.
Rabbi Perlow related that R’ Mendel used to theorize about the concept of judging others favorably, wondering how one could go lifnim meshuras hadin and be extra stringent in this matter. R’ Mendel’s answer, related Rabbi Perlow, was simple: don’t look at others.
The Novominsker urged listeners to take R’ Mendel’s words to heart, addressing a scathing rebuke to bloggers who feel the need to comment on any issue that arises.
“Rabbosai, we have become a society of kikkers, of lookers,” said the Novominsker. “We look at yenem and we make comments. There are many self-appointed mevinim amongst us unfortunately, ready to sound off on anything and everything. These mevinim have no compunctions about opinionating about whatever goes on in the Jewish world, in the Torah world especially and very often, as a result of that curse of technology called the blogs, they engage in cynicism and zilzul talmidei chochomim and downright chutzpah.”
Rabbi Perlow quoted the Kotzker Rebbe who would exhort his followers to scrutinize themselves and their own actions instead of looking at the behavior of others.


perlow: "that curse of technology called the blogs, they engage in cynicism and zilzul talmidei chochomim"

this blog praises itself (their opnion) and spreads lukewarm zionisim by stradling. .)

You are treating a child like an adult. He is young and does not know what to do with a התעוררות. If he has a good מחנך, he will be ignored and trained to an אמת'ער way of dealing with his spiritual leanings.
Reb Yerucham zt"l used to advise leaving these people alone. It is not a new phenomena.

rav ahrele was the holiest jew

is the head of a political party called Agudas yisruel and chosen by the party, it should be mentioned in order to understand hiz opinion on different issues.

hey you, I understand a sinner praying weaving and bobing, but when a "meshuganer sinner" does it it's a little irretating, don't you think?

did you guys finnish the kapuras assult coming after a strayed goat ? go after the kapura/money hint: (רח"ש געלט) leave us poor souls alone .

Are you going to hold it against the bocher when he is in Shidduchim? When his children are?

relax tzug won't do such thing, he was trying to talk to us not to the shock-el-dick'er bucher!

I knew Mendel, there were some tzadikim, in Boro Park and Lakewood, amongst others that took care of him.He would not let just anybody take care of him.
When you got him on a good day, he had lots of pearls to say and one of the things had was to leave candies in shuls anonymously, but "nor mit a gitteh hechsher", mehane tze zayn yidden

I essentially agree with Reb Hershel, except that I am that kid. I used to do it when I was fourteen and I still sometimes do it today - certainly when Davening alone. I like to, and it is a real experience. Back then I was truly pure, unfragmented, and had lots of baby fat; now I'm a baal aveira who can't rid himself of doubts - unless I'm Davening. Chabad, certainly dor hashvi'i, would mach aveck my davening - and sometimes I agree with them - there is little dechilu there. Where does a guy like me get such feelings from, I wonder. Maybe it's just an aesthetic experience. On the other hand, it connects me to my days of hasmada, reminds me of my ahavas hashem, my inner spark, and hey, I need SOMEONE to talk to, don't I?

I don't know if in this blog you cover the way in which Chabad seems to have really changed vis-a-vis Tefila (and, a much bigger issue, "pnimiyus" bechlal). In the Alter Rebbe's now-famous letter to the Czar, he basically defines Chassidus as Davening B'arichus (ayen sham, HaMaasar Harishon).

There is always the struggle when one relates to the Diety in a personal way, that vehalo hashamayim ushmey hashamayim etc. And why should I count or my puny thoughts makes any sense to his big brain, so I think Tefila requires a certain sichlus me'at - does anyone know if we find this in seforim?

There is a place where the Maggid says (something like this:) that if you talk to Hashem like a beggar who is not likely to get much and doesn't deserve anything and you kvetch with a a lot of merirus, you are answered much like someone would be who were to take that approach with a gevir; if on the other hand you sally forth with jolly attitude... (likutim yekarim, look it up as I might be distorting it).

A fourteen year old's merirus is a much more attractive thing than mine. Who knows how much our later life depends on the immature tefilos of our youth?

avraham: "A fourteen year old's merirus is a much more attractive thing than mine"

This thing about dovening is very much overdone. People are 'pretending' to be in dveikus, but it's just make believe. Then when they are finished they go on their way and act selfishly, meanly, and trick people out of their money etc. To me, it's exactly like when no-one talks in Shule at Kedusha, and they shokle and sing it, but then at other times they can't stop talking even during Kriah, and that's if they are not outside talking. Hashem wants our attention all the time and not to go overboard for half and hour a day and then think we are so holy and entitled to do what ever we want at other times.

in the cloisters they don't shokile, no talking either, should i assume no ganives there. are only ganives shokle and talk? is it that what the gemara says: גנב במחתרתא רחמנא קריא wouldn't you say that god listened to him the robber. of course he does, be careful don't ask him for to much brains. .