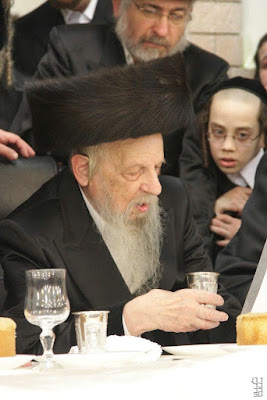 You can scan the picture sites for pictures from his lifetime, including the period of 1948, etc. We brought it here some time ago. But what I'd like to say now is that in my very humble opinion, and in my uneducated opinion, Seret Vizhnitz was what Vizhnitz was all about, before it became about which direction to wear the hat and what kind of glasses to wear. במחילת כבוד האדמו"רים הצדיקים שליט"א בן ונכדי האמרי חיים זצ"ל. Vizhnitz was all about the three loves. אהבת השם, אהבת התורה און אהבת ישראל. The Sereter Rebbe, in the footsteps of his esteemed father, established a beautiful community in "red' Haifa, one that would put to shame any other Chassidus in Bnei Beraq or Yerushalayim. And he did it, as far as I can tell, with good old fashioned love. The Vizhnitzer way. When he spoke to his chassidim he spoke of זיין גיטע ברידער און ליב האבען איינער דעם אנדערען. He loved his Chassidim and they loved him back. This was the way of the Besht. Love every Jew באשר הוא שם and try to get him to improve - if possible. With his passing we have lost a link to the Chassidim and Chassidus of old.

who privied you to that, is this quote in realm of the rebbes saying הוא הוא דרך הבע"ש

does anybody know in what infantry the rebbe served in the IDF , or was he of the לחי אצל חברה

you spelled it the buckaweiner way, in israel they spell it סרט-ויזניץ i for some ecological reason spell it שרט, וועש-ניטצט go figure .

buck, stop kicking. I would like to know in which yeshuva this great tzadig studied who was his rebbes.

he was 15 or so when war came to Bukovina, until then he studied in his father's Yeshiva

news :
The IDF Rabbi of the Nachal Chareidi regiment, Rabbi Shaul Avdiel, informed the Charedi soldiers in the past days, the eve of Shloshim of Seret-Vishnitz Rebbe, Rabbi Eliezer Hager ZT”L, which will be on Wednesday, 20 Menachem Av, the regiment will hold a “an all Torah day” as an aliyah for the rebbe’s neshama. The theme of the day will be around “Torah, holiness and war”.ed inspires our soldiers as he combined in his unique character both a combatant and a mitzvah and Torah abiding Jew, without one overriding the other .

Father sureto
I dont see a yerida
I see a aliya and all the enemies who invested in hate , are Platzing....

"invested in hate , are Platzing."

the platz for platzing is at the MoralLess site come home we accept all zi platzta whom M kahana and AJ left for road kill, or chsidim of this last don and militant rebbe, come home comrade you're salonfaig by us.