Liberals and Techies have NO qualms about crying "injustice" for their own - why should frum Jews? 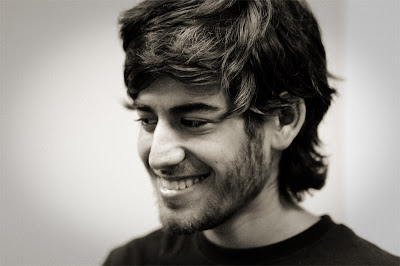 Crying for Aaron Swartz. (...הי"ד) Now, remember this: Aaron was caught red-handed  - on video - stealing information that the Government considered protected. He considered it otherwise, and broke into the MIT labs to get that info so he could upload it to his site. He was looking at an obscene sentence. Something like 50+ years. But weren't we told that we need to respect the American justice system and that they're totally blind and have no agenda? Didn't many of these same people  jump for joy that a man who "mistreated" animals was getting "what's coming to him?" Yet Mr. Swartz, who I know really nothing about and have no opinion about, is a quasi-martyr! Mostly because he stood up to evil Government, the very same justice department that was so lauded when they went after - you guessed it - Sholom Mordechai Rubashkin. To them publishing stuff on the internet is like the most important cause in the world, so the ends justified the means. The fact that it WAS illegal means very little, and they go as far as to blame the Government for his untimely death. They'll point to the fact that "the architects of the financial crisis regularly dine at the White House — and where even those brought to “justice” never even have to admit any wrongdoing, let alone be labeled “felons.” In other words, it sounds alot like the defense of Reb Sholom Mordechai, which we were told was inexcusable. So let's take a page out of their playbook, the smart and hip people, if you see injustice speak out, even if you look silly in the eyes of those who think you're silly anyway...
Posted by Hirshel Tzig - הירשל ציג at 9:55 AM

Here is the place to protest
Bobov

maskim with your concept said...

I assume that putting cheap Meat and Poultry on a poor persons table. And creating a economy for 400 poor LEGAL Latinos is not as important as some papers of MIT in New England.
I would like to know how Shneur and is OU/YU brothers approach this?

Shakoach for tackling this issue

Its great that the Orthodox community is becoming a powerful voice against the excessive convictions pursued by prosecutors.

I just want to point out a lesson to learn from the Aron Swartz story.
Here was a young man, 26 years old. At that age he should have already been happily married, with one or two children, who would have given him joy and satisfaction day and night. Instead, a wasted life. Obviously full of sadness and depression. Let no decent person ever envy such a man. Live your life decently. Get married, have children, make an honest living. By all means try your best to accomplish and leave your mark on this world, but never forget the basics.
These things were once self understood, sadly society has degenerated to the point that a man such as this was envied, until his obviously pitiable state was revealed to all.

host farmisht to yaitzes. Swartz was prosecutorial misconduct, the clamor for Rubashkin is about the judge imposing a penalty that is justifiable but at the high end of the allowed limit.

Which is curious - there was prosecutorial misconduct in Rubashkin case as well, but no one makes a big deal about it - again, because yidden don't care about the justice system in America working or not, they care about Rubashkin getting out of jail, and focusing on prosecutors won't get him out.

In general, prosecutor's misconduct is a very big deal in the justice system and at some point will come to a head and be dealt with, while judges sentencing is generally not a problem (and wasn't a problem in Rubashkin's case either - although the prosecutor's misconduct may have driven him to lie to the banks - but then again, he probably played games with illegalities before, and this one he happened to get caught on. Ver vais.).

Joe
"Swartz was prosecutorial misconduct"
can you explain why? swartz did a illegal crime, its on the books as a crime? so the prosecutor was acting as the law enforcer, wanted him in the slammer for good, please explain the misconduct

Joe
"but then again, he probably played games with illegalities before, and this one he happened to get caught on"
I see its your style to spew halfbaked facts....

Your comparing the advocacy for Aron Shwartz to that of SMR is one of the better things I heard on the subject. I don't agree with the sentiment only because in both cases I thought that those that argued that the defendant should be exempted were wrong. If the justice system needs to be corrected - which it does - that should be done for everyone. However, the point, in the context you made it was a sound one.

I would only add that in the case of Aron Schwart'z, the activists crying foul are people that regularly engage the Justice system and other civic institutions and their opinions are informed ones and in many cases they work to make the system better. Whereas in the frum community, through the deliberate withholding of secular education the justice system is viewed with a general mistrust, if not open disdain (unless of course a goy is going to jail) and is only engaged for parochial interests like when a Jewish man is about to be executed when there was no question that he committed a crime. I think this attitude will have dire consequences and already does; when the only thing people know about criminal law is that SMR got 27 years even though he is a good man and Weberman gets 103 years compred to Levi Aron’s 40 etc. they decide that the system is rigged against religious Jews and no wonder there is a hesitancy to report crimes that desperately need to be.