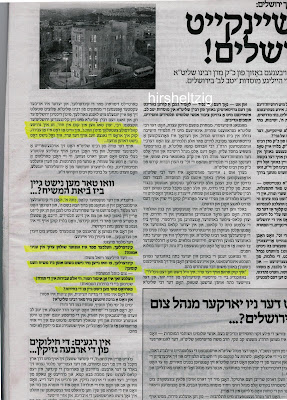 Kinderlach, what do you do if your Melamed does strange things to you?

Should you tell your parents?
Answer: Of course not

Should you tell anyone?
Answer: Of course not. It's better you end up off the Derech than cause your Melamed Tzaar by doing Mesirah on him to the Tumadiker Areilim.

Nah, it's more important to ensure they know they shouldn't go to the Kosel.

Of course you didn't highlight the last question about the ברכה to their Rebbe, as people who live in glass houses should not throw stones, But us Litvaks are getting a good laugh out of that question too. We also sing ימים these days, but to make it from the יסודות of Yiddishkeit?
א ליטווישער יונגערמאן

Litvisher Yungerman
"We also sing ימים these days, but to make it from the יסודות of Yiddishkeit?"
When Mr Kohn (Menahel of Gateshead seminary) bought a car, he told me that he had CONSULTED WITH GEDOLIM. He explained his need to be able to get around. (what a deep Shailah?)>He needed to supervise student teaching in chadorim in Newcastle,Gosforth, and jesmond. (now the shochking answer)The gedolim "gave him permission"
Rabbi Binyomin Zeilingold
Lakewood NJ (Hamodia Jan 30)
Is this not a Gadlishe sipur, ???
In New square they are more intelegen then that, and please keep your Livishe Drekk for yourself

Hirsheleh, leyben
I know you won't touch any lubob issues (boss of lubob p.r does not allow)still, what do u say about Ashkenazys psak, that the lubob wigs are not kosher? i mean lubavitch was always trying to push wigs as better than anything else (something quite interesant since nobody else thinks wigs are better, at most they are also acceptable)
will u get special permission from the "powers that be" just this time?

i see that the crownheights.info here: http://crownheights.info/communal-matters/370945/rabbi-says-long-wigs-are-not-proper-head-coverings/
brings this "psak"
i also notice that the posters are up in arms as it goes against the way they understood the lubob way.

Interesting that Ashenazys letter does not address the Rebbe as eother zatzal or shlit'a, maybe he is a "parevist" like chaim dalfen?

@kletzker
I fully agree. You will find some extreme examples. obviously Mr Kohn - whoever he is- is a fool. But le'maaseh the chasids are still generally worse! The Litvaks are suffering from a relatively recent disease which is spreading from Bnei Brak.
Litvisher Yungerman

The late Mayor Koch and Bobov.

If lubabs took shleimus haaretz as seriously as satmer does the shita hakdosha, you'd have your own 3 seats in the knesset.

Litvisher yungerman
"But le'maaseh the chasids are still generally worse"
the facts are, the last 35 years it gets worse ans worse by the litvaks, just see the way Reb Chaim crowned Rav Shtienman(who was basicaly a magid shiur in Yeshiva Ketana, they used to call this a Melamed) as the manhig hadioir,or his terorizing who ever does not follow the Chazon Ish as a Mechalel shabos,It has noting to do with Reb chaim having bekius in kol hatorah kulo,but even the Gra they did not follow as the Mishkenois Yakov writes in the teshuva, and the herd follows. Chasidim dont follow so quick nobody.

Funny to hear a so called "chasid" hanging his hat on the Mishkenois Yakov.

You have to take shtolz in that
Letzker tipesh aka, the "guy" from the mikveh

Moshe Moshel - Maybe there aren't that many Lubavitcher chassidim in the world to get that amount of seats. They may be vocal but not necessarily many.
BTW, I read this Der Yid in the bathroom of my kollel last week when it came out. I came out and told other people about it. Their reaction was "mental molestation". They tried to claim that in the times of the Divrei Yoel this did not take place. Does anyone have any information?

You must be living under a rock. The "Gadolatry" that the Litvish practice is malodorous. I live in Toronto, and all I hear all day is "R' Chaim said this, R' Chaim did this moifes etc."
They say "R' Chaim" as often as your average African American uses the Fai word (which, for you uninitiated, its every other word).

And did you hear the one that they say about R' Chaim that there was a draught in E"Y and he said Morid Hageshem by mistake and it started raining (heard it at a recent bar mitzva).

If Chassidim live in Glass Houses when it comes to this issue, then the Litvishe live in plastic houses. V'dal.

Yankel
it happened then too, but then only the outsiders laughed, but today the insiders laugh too, but they think its important to brainwash the upcoming doir

chasidess and chasidem survive because the misngadim have been dragged into this nonsense.
Without that who'd follow the bums with peltz?
Yuck

Tibi Lotzi - will the incoming dor be brainwashed enough to be convinced that they have to brainwash the next dor, or will they really believe?
It seems people have a need to elevate themselves over others for their own emotional satisfaction. Instead of saying "my tattie is stronger than yours", they imagine things about their Rebbe. That is fine and understandable, albeit untruthful, but when they start demanding these beliefs from others, they must show some kind of logical proof.
And Herschel, that goes for Lubavitch too.