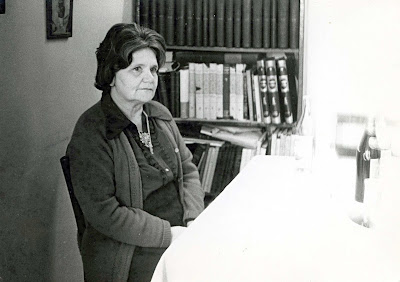 זלדה שניאורסאהן-מישקובסקי
"Zelda (Shneurson Mishkowsky) (1916 - 1984, b. Chernigoff, the Ukraine) was born into a famous Chassidic family. His (sic!)father was a rabbi and her mother, devoutly Orthodox, was also well-read in modern Hebrew, Russian, and European literature. They immigrated to Jerusalem in 1926. She studied at a religious school for girls and then at a teacher`s seminary. She then studied art and painting in Tel Aviv and later moved to Haifa, where she worked with handicapped children. When her husband died she returned to Jerusalem and taught, retiring after almost 50 years. Known simply as Zelda, she began composing poetry as a teenager but began publishing only in 1968. Awarded the Bialik Prize, she published six volumes during her lifetime before dying of an illness. A complete collection of her work was published posthumously.Acclaimed for her directness, precision and simplicity, and well-loved by the predominantly secular Israeli readership, Zelda`s memory and symbolism are steeped in traditional and Chassidic allusions."
Source: ITHL

Zelda was also childless. Her father was a brother of Reb Levi Yitzchok, the Rebbe's father, and a son-in-law of the Radatz
Posted by Hirshel Tzig - הירשל ציג at 5:05 PM

Zelda was married to a man called Mishikovsky who was part of a famous Lithuanian rabbinic family . The most famous member was the late Kriniker rav rav Mishikovsky who was the right hand of the Achiezer Rav Chaim Eyzer of Vilna. In Israel rav Mishikovsky was the head of the Vaad hayeshivoth and created the Yeshiva in Kefar chasidim where rav Elya Lopian acted as mashgiach ruchni.
If on reads the later editions of the bio of Reb Levik by Gottlieb carefully one will note that reb Levik had several sisters as well as 2 brothers .

About 20 years ago a Russian Lubavitch group in Israel published her poetry in Russian translation. I had the booklet and since misplaced it somewhere.
Does anyone know what i am talking about and does it have further info on her relationship to her famous 1st cousin in Brooklyn, NY?

Reb Sholom had a brother Shmuel, they married two sisters, daughters of Radatz Chein. Sisters I am not aware of. Is there any mention of them in his father's writings published recently?

A grand daughter of one of the sisters came to israel about 10 years ago, as reported by one of the Chabd publications in Isreal. She was married there in a Lubavitcher ceremony.

To her credit it should be noted, that despite her being an Yesomah at a young age, and living in Israel, and being a woman of much artistic talent, she remained steadfast in her beliefs and never foresook Judaism, although the temtation was definitely there.

Yes unlike other artsy Israelis , she chose to remain devotly frum May her memory be blessed .

I find it fascinating that a scion of a Chassidic "royal" family like Zelda would marry a Bochur from an arch-Litvishe like Chevron, a descendant of great Litvishe Rabbonim. Would that happen today?

Moishe,
Things were different then. first of all, nice & ehrliche frum yidden were not as easy to find then.
If you found one, you werent picky about political denominations. Similar cases were rampant, and it was probably a lot better then... Jews were Jews. Everything is so fragmented today, why can't everyone just see it our way, and become Lubavitchers?!
;-)

Yes, Gersh, times were different and we've all changed.

Times have changed in East Europe people married for various reasons , Chassidic allegience was not top on the list. Things like family combatibility, wealth, status etc were much more important.
Chassidim routinely married Eylemsche yidden .There were conflicts but it was "all in the family".
But in the post WW2 years Judaism has become belonging to a party and one only marries into the aprty. So Gerer marty Gerer, Cabad marries chabad , Hungarians marry Hungarians etc.
I beleive the curent mashgich in Kefar chasidim rav Jaffe si also married to a Gurary.

In that sense today's "hangups' are much les than "amol". Then a Hungarian would never dream of marrying a Peylisher and vice versa. Today, as long as you share the same beliefs, you're compatible. Lineage doesn't matter as much. Except to the "Rebbishe types", who marry only first and second cousins, but that's another story.