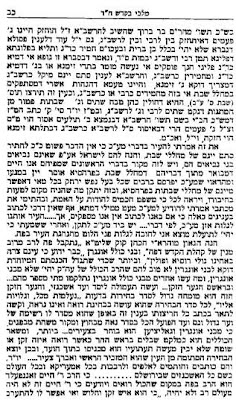 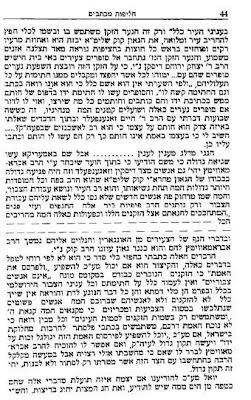 a. Man yaimer lan, that this letter is true. It is quite obvious that the writer has an agenda, which is not in line with r' Hersh Paysach's gadlus.

b. Naniach it is true, then man yaimer lan, that this was the accepted opinion in Yerushalaim. R' Y Ch. Sonnenfeld was no cheder yingel either, and he didn't come to Yerushalaim at the invitation of some hooligans, as the letter would like to imply.

it's not supposed to be a putdown of RYCZ, rather a defense of RAYK.

Can I ask a silly question where can we see the greatness of Reb Yosef Chaim Sonenfeld? Tzidkos only hashem knows but torah, I can see the gadlus of Rav Frank and Rav Kook

"where can we see the greatness of Reb Yosef Chaim Sonenfeld?"

"where can we see the greatness of Reb Yosef Chaim Sonenfeld?"

With all due respect, Salmas Chaim is much ,much ,much smaller than the author. Salmas Chaim is a collection of one word answers to questions asked to RYCS from someone. The first of the five trillion such books from Rav Chaim Kaniyevsky. Frankly, there is little greatness in it.

ur taking a microscopic slice out of an epic era...

Are you sure about that? Was RYCZ in Yerushalayim Bichlal at that time? RTPF came with his parents as a bochur after learning in Telshe. He was born in Kovno, and probably would've had RSS, the Litvishe Rov, do anything of the kind if he needed that help at all....

compare mara d'ara dyisroel and ish al hachoma, surprisingly both seem to disagree with the sentiment of that letter. rather it was rav frank who was a major mover and shaker in bringing in kook as rav........

he came alone as a bochur

Born in Kovno, Lithuania, Rabbi Frank studied in Lithuanian yeshivas, learning under Rabbi Eliezer Gordon, among others. In 1893, he emigrated to the Land of Israel with his parents and continued his studies in yeshivas in Jerusalem. His father Yehuda Leib Frank was one of the founders of Hadera.

take it or leave it.

I think ish al hachoma has a copy of the tnoyim, I don't have time to find it now but its at home and hopefully i'll get to it.

Just for clarity, here is the text from Encyclpedia Judaica:

FRANK, ZEVI PESAH (1873–1960), chief rabbi of Jerusalem and halakhic authority. Frank was born in Kovno, Lithuania. His father, Judah Leib, was one of the leaders of the "Haderah" society in Kovno which founded the village of Haderah in Erez Israel. Frank studied under Eliezer Gordon at Telz and under Isaac Rabinowitz at Slobodka. He attended the musar discourses of Israel Lipkin of Salant. In 1893 he proceeded to Jerusalem where he continued his studies at the yeshivot of Ez Hayyim and Torat Hayyim. He acquired an outstanding reputation, combining a profound knowledge of the Talmud with sound common sense. Despite his youth, he was encouraged by Samuel Salant, the rabbi of Jerusalem, who consulted with him in his halakhic decisions. In 1895 he married Gitah-Malkah, granddaughter of Hayyim Jacob Spira, head of the Jerusalem bet din. Subsequently he taught at a number of Jerusalem yeshivot. In 1902 he moved to Jaffa in order to be able to devote himself entirely to study. Rabbi A. I. Kook had already taken up his appointment there, and later he and Frank associated in the efforts to establish the rabbinate of Israel.
In 1907 Frank was appointed by Salant and the scholars of Jerusalem as a member of the Bet Din Gadol in the Hurvah synagogue. Although he was its youngest member, the burden of the bet din, and the religious affairs of the city fell mainly upon his shoulders. He conducted single-handedly the spiritual administration of the city in the difficult days of World War I. The Turks tried to send him into exile in Egypt, but he hid in an attic from where he directed the rabbinical affairs of the city until the entry of the British (December 1917). The rabbinate was in a perilous state and Frank made strenuous efforts to raise its status, both materially and spiritually. He understood the importance of founding a central rabbinical organization, and immediately after the British occupation, took steps to found "The Council of Rabbis of Jerusalem." This organization, however, was shortlived. Later, however, he established the "Rabbinate Office," which became the nucleus of the chief rabbinate of Israel, and on his suggestion A. I. Kook was invited to become chief rabbi of Palestine in 1921. In the violent controversy which resulted, fomented by the extreme religious section which saw no halakhic precedent for such an appointment, Frank brought proof to bear. In 1936 he was elected chief rabbi of Jerusalem. In consequence of his preeminence as a halakhist, the appointment was accepted by all parties, including those who opposed him on political grounds.
Frank was a rare Torah personality. He was approached on all difficult halakhic problems in Israel or in the Jewish world, and unhesitatingly gave his ruling. He was especially concerned about agunot (see Agunah) and the laws pertaining to the Land of Israel. Immediately after the Balfour Declaration (1917) he expressed the opinion: "we have been worthy to see approaching signs of the redemption"; he began to clarify the laws of the Temple and sacrifices, and also headed the Midrash Benei Zion, an institute established for the clarification of the laws of the Land of Israel. He devised no novel procedure in halakhic ruling, but followed in the tradition of the renowned posekim Isaac Elhanan Spektor and Samuel Salant. He fought against the military conscription of women and yeshivah students, exclusively secular education, and the desecration of the Sabbath. His statements sometimes raised a storm, but they were always received with respect. Together with Rabbi Isaac Herzog he entered into an agreement with Hadassah Hospital on the circumstances under which autopsies could be performed according to the halakhah. He left many manuscripts, in particular responsa, constituting some 20 large volumes from which Har Zevi (1964), on Yoreh De'ah; Mikdash Melekh (1968); and Har Zevi (1969) on Orah Hayyim were published.

The second part of Rabbi Frank's responsa on Orah Hayyim, Har Zevi, has now been published, edited by R. Shabbetai Zevi Rosenthal under the auspices of the Makhon ha-Rav Frank. The volume consists of 132 responsa. Some of the responsa reflect the author's attitude toward the State of Israel. For instance, he regards those areas acquired in the War of Liberation as Israeli territory in every respect, legally acquired by Israel, with the result that the laws of terumah and ma'aser apply to it and vessels captured from the enemy are liable to tevilah, since they are to be regarded as legally belonging to Jews.

i suggest the words of rav kook should speak for themself,i don't believe any yid with emunha in hasem can defend them.

the young football players of isreal lift the "sechina while playing football,
much higher then dovid hamelech with his tehilim " r"l !!!!

however it"s no suprise to me ,

bcs it is in line with shitas lubav

and still was given a hakofhe
on simchas torha in lubavitch (while he was mechalell yom tov in new york and ate trief in n.y. )

this was defntly not the shito of the rebee mehryatz , just resd the letter of the rebee in sefer tikun oilam
wich speaks volumes abt his shito re hischabres with rhesoim....

the young football players of isreal lift the "sechina while playing football,
much higher then dovid hamelech with his tehilim " r"l "

C'mon. I heard this again and again but thats not even close to what Rav Kook said... Please bring the sources, not satmar propaganda!

Im not denying that many of his statement were highly controversial (at least), Im just saying there is no need to make them sound worse.

"When the holy people will be physically firm and strong," Rav Kook wrote, "holiness will prevail in the world. When Jewish children will be strong, sound and healthy, the air of the world will become holy and pure."

The important point to remember as we follow this thread is the following;
The source (and only source) here is Malki BaKodesh from Rabbi Hirschensohn. Nowhere else is there anything from the Yerusholayimer Rav, Harav Hersh Pesach zt"l, remotly resembling these letters. Nor is there anywhere that you can find him writing with the bitter and derogatory tone exhibited in this letter.
It is quite clear that these words are not from the great Rav and Tzaddik.
Poor Rabbi Hirschensohn had no respect among the leading Torah Scholars here in America.
He was known to be a "maskil", and was hellbent on destroying old fashioned yiddishkeit, very much pursuing the methods and teachings of the leading "maskillim' of yesteryear. The same ones that caused so much pain and grief for our Rebbeim and other Gdolim.
History has recorde all his lenient teachings and his dismissal of many of Chazal"s teaching as irrelevant in modern times.
We definitly can not take his words at face value.

"Poor Rabbi Hirschensohn had no respect among the leading Torah Scholars here in America."

Your are eather joking or talking about a different Hirschnsohn. Rav Chaim was one of the most respected and active Rabbis of Aggudas HaRabonim (THE orthodox organization in his time). He was actualy "Head of the Education Committee of the Union of Rabbis".
He was the architect of jewish kindergardens in America.

Maybe you should read some more about those times...

And BTW Rav Frank was the chief oponent of the very existence of Eida Chareidis and most of his political writings (if i can use this term) support the authenticity of this letter.

the quotes from kook are quoted in the hebrew biography of kook by simcha roz as being accurate. he printed the pashkeviln and then defends those statements.

I don't have the book (Rav Kook) at hand so can you please bring the exact quote?

Yes, any many gedolim called rav Kook the same title...

"He was active" that is true.
He was constantly involved in educational matters where he inserted himself forcefully, as part of his vision to modernize and enlighten the Eastern European Jews who showed an interest in staying frum. He was a firm believer in modernity and change and was quite radical. He was a constant critic of the accepted Poskim, (especially the European ones, anyone, be it Litvish, Chassidish, Hungarian or Polish)came up with novel interpertations and leniencies, causing tremendous strife amongst the rabbonim of his days.
His teachings, thoughts and visions are published and recorded by himself and others of his time. There is no question that he was a "Maskil of the highest degree".
Anyone who reads his books can see it.

Anonymous, I agree with most what you said but I still say he was very respected in american orthodox circles.

And "Maskil of the highest degree"? That depends on the definition, doesnt it?

Anon
being a Maskil doesn't make you into a letter forger until proven guilty,and being Charadie will make you a forger if you are caught red handed as Bloch in Doviev Sifsie Yesheinim,

Anon
From your description I dont see him being more Maskil then Hirsch Hildesheimer, the Kanoim of then as R' Zelig Margolies and Semnitzer would kill them as well