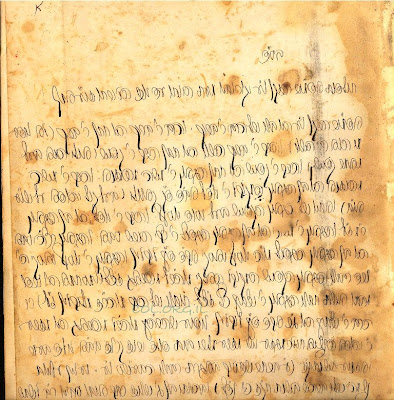 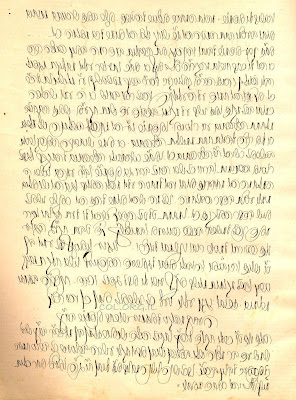 COL showed this today, memoirs from the Rebbetzin Shterna Sarah and the story of her lineage from the Alter Rebbe written in her own handwriting. I'm surprised to see it, really I am. This may shock some of you, but where my family comes from, especially in the parts where the girls were not forced to go to Government schools, women didn't know how to write. period. They couldn't sign their own name, let alone write a memoir, and they definitely could not write like THAT! I imagine other women in Russia and Lithuania could write as well; she wasn't the only one got a private tutor to teach her to write. So we see a different approach in women's education, even at a time where everything else was basically the same. The Rebbetzin was born in the 1860s, so there is no "modern" excuse here, as can be made a generation or two later. Her father was a Poilishe Rebbe who went from Chabad while his father the Tzemach Tzedek was still alive and assumed the ways of Chernobel, so its safe to assume that they had the same set of rules and priorities that the other Chernobler kinder had.

I've been told by scholars and amateur historians alike that much of what we do and believe as Jews today has no real basis in Judaism. I mean behavioral and cultural things, not Mitzvos, c"v. Whether Ashkenazic or Sefardic (Sefardim maybe especially so.) We're superstitious like the Goyim and we used to treat the women like our non-Jewish neighbors did. They were meant to stay home, wash laundry, clean and cook and womanly things like that. We could chalk it up to Talmudic statements saying how you mustn't teach your women Torah, but what does that have to do with learning how to sign your name? The other option would be to say that it had nothing to do with Judaism, it was a cultural thing. For some reason it seems like some Jews saw past the cultural thing and decided it WAS important for their female offspring to at least have a basic education, no matter what conventional wisdom said. To be fair, it may have had something to do with lack of funds, as most Jews could hardly afford Melamdim for their boys, whereas Rabbonishe, Rebbishe, and Balebatishe types may have had some extra cash for amenities like that.

So maybe it's not an Hungarian thing.
Posted by Hirshel Tzig - הירשל ציג at 2:17 PM

The Rebbe's mother, Rebbetzin Chana also has her memoirs, and for those of us out there that believe in the Zichronos, we see even more evidence of learning, even further in the past!

Well my Hungarian Mother A"H, Grandmothers and Great Grandmothers A"H all wrote yiddish beautifully. True - they were all from Rabbunishe heizer.

Reb Hershel I didnt know this was an adult blof where you allow comments with words that wouldnt be alolowed to be aired on radio.
Example: anonymous Thursday, September 18, 2008 10:26:00 PM .

Scr-- scholars and historians. Not everyone, but those that say this bull----. They come from a field in which one does not use scientific method. They are prejudiced. They are ultra-liberal. They are tolerated by the rest of academia, because the alternative to what they are saying is impossible for atheists to accept.

What does knowing how to sign your name have to do with anything? Why does a man need to know how to read or sign his name in the Middle Ages? Two reasons: to make parnasah (not a peasant) and to learn Torah (so, L”K only). None of the two applied to women. They received Oral tradition of how to be the engines of their families. When the times changed, the customs changed.

Less gaivah. More bittul and kabbalas ol. We are not here to learn how to sign our name. We are here to do our little mission to unite Atzmus O”ES with gashmius. Women were nothing? We are all nothing. Even now. (And some of use are takeh gürnischt.) There is only one something — only one Ich in the Universe.

Are you really a Lubavitcher? Are you sure?..

P.S. On the other hand, if this was a provocation post — good job.

Thanks, it has since been corrected.

G-d forbid anyone thought this was a blog for adults. :) The level of maturity is on the level of teenagers, despite the fact that adult issues are being discussed.

Tell me, who gives a flying fig about this boring post?Does anybody care if some rebbitzen could write loshon kodesh or not?
Is their anything remotely earth shattering about it?
Also you show your peasant roots but telling us about your illiterate female (and possibly male..)ancestors.
Where educated and intellectual Jews came from the women folk could read and write.

I imagine you went to selichos at 1 am, came home and saw this post. Is that the best you can come up with after saying selichos?!

Tzig
You wrote a post and want people to respond .Do you want brown nosed 'chanifeh'?
The post is of no interest to almost everybody.The fact that some Lubavitcher rebbitzen wrote it notwithstanding.If someone was so interested they could easily visit the Chabad sites that discuss this material, although even there there are few takers.
Don't try with a guilt trip about what I did after selichos.
The fact is that you have your bunch of sugar coating Lubab chevreh who never tell you the truth and never give you constructive critiscm.

This describes you so well.
When will you mature and see things in a multi dimensional world, where you won't automatically say He is a Lubavitcher (or Yankee fan)=good he is a farshinkeneh Snag (or Mets fan)=bad?
Judge things on their merit or lack therof, not on the size of the beard or whether they drink only Cholov Yisroel, though their rov sanctions their practice.

zzzzzzzz. Wake me up when you post something even a little more intresting than this. (even if its total nonsense and ilogical, like your "mussar bombshel" post).

While his nesius was a Peylisher , Rav Yosef Yitzchak was probably still very much the Chabad Litvak in his private life.
The Rashab called his son - Mein peylsiher bederech Zechok as he was a grandson of Reb Yosef Yitzchok of Avretch.

Now again a 'da'as teyreh' so called 'rov' has not allowed the donation of organs to a Lubavitcher rabbi who subsequently passed away.
The 'snag' rov is 'quoted' as saying that Lubab are worse than dogs!


The above is a parody of the type of dreque, the Tzig would post.

I have no idea if the rov that did not allow a transplant is a snag, I don't know who it is and I offer heartfelt condolences to the family.

What pissed me off was that I already saw some pos Chbsdker tuchas 'spokesman'looking to blame a rovs psak for the tragic passing, I also know that the Tzig is cut from the same cloth as the pos 'spokesman', so this is just an unedited version of the post the Tzig will surely put up.

it amuses me how people like you decide what I would write without me ever having written anything of the kind. I guess you feel guilty that you and your kind killed a 52 year old man, eh?

Tzig said,"it amuses me how people like you decide what I would write without me ever having written anything of the kind."
Shaifele,anything we decide you MIGHT post would never do justice to describing the brainwashed garbage only a guy like you actualy DO post.

1. It’s really funny when Jews who did not receive formal higher education (and normally show no respect to academia because of their background) take something said by some “specialist” as the Emes. This is what education gives you: skepticism. It’s like when mail arrives: you identify spam by a mere look; you don’t sit and read through another credit card offer or a furniture commercial. When in need of a credit card or new furniture, you search through other channels.

2. Nu-nu, what’s knew? Read Mendele, Sholom Aleichem, Peretz and all those other self-hating Jewish writers of the time. This is where it all started.

I guess i think differently than most of the bloggers here cuz i liked this post.
Can't say it was earth shattering but it stimulated something other than the mouth (or in this case hand).

Anonymous 4:06.
Literacy is not purely utilitarian. G-d gave ALL of us a mind to be used.
How would you be able to spout bittul, kabalos ol, atzmus etc. if you couldn't read or write?

Men too, by the way: the secrets of Kabbalah were not revealed to the masses, until there was a need for them to be revealed, and even then, there was an opposition, as all Lubavitcher know. So, in a sense, all men except for a selected few were illiterate throughout the history, as far as certain ideas in Judaism were concerned — and the texts carrying these ideas were designed so that the majority would be illiterate regarding them.

Now, I don’t think with women it was quite the same case: they were not kept illiterate purposefully; there were limited resources, and they were spent on those who had obligation to know how to read and write. It’s the same discussion as with any other thing women were not part of throughout history.

In our days, the times have changed, because the world has changed. Things that were unacceptable before for Jews (not just women, men also), became acceptable and necessary for yiddishkeit to survive. That includes women getting education — which is why the Rebbe, for example, was a big supporter of good education for the girls.