Twerski gets the message 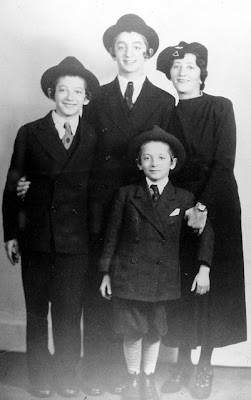 According to published reports Dr. Ben-Zion Twerski has withdrawn from any public role in Dov Hikind's crusade against sexual abuse - a very noble cause indeed. He wrote a very long letter to VIN telling of verbal abuse and all kinds of threats he's received over the last days ever since he announced his involvement. In his own words: “I was prosecuted in the street for daring to join such a venture.” To protect myself, my family, and reputation, I decided to withdraw from this project,” he wrote in an e-mail. From this point, I am avoiding participation in any forms of public service. Public life is not for me.” I don't believe this has ever happened before, criminals threatening people who try and help the victims of terrible crimes - at least not in the frum world. It definitely has never happened to a Rebbishe Kind and a professional of Twerski's caliber. I doubt even Rabbi MD Tendler had to put up with this kind of harassment, even at the worst of times, so why does Twerski deserve this? I have a theory, tell me what you think.

We all know how the Twerskis are a shining example of yidden, chassidim, yerei shomayim who despite growing up "out-of-town" and attending prestigious colleges - often Catholic Colleges like Marquette - clung to their traditions to the last details, even some of the more ceremonial ones like the strukkes on the Bekishe. After two generations most of them came "back to the fold" in Boro Park and Flatbush and joined the thousands who live a very secluded lifestyle, a far cry from Milwaukee and Pittsburgh. Reb BenZion is one of those who moved to Boro Park and became a full-fledged member of Bobov. His children do not attend colleges and I doubt they're exposed to what their father was exposed to growing up. BenZion Twerski thought all was well - his Rebbishe credentials and professional background would surely of allow him at least to speak his mind and help those who were hurt by those who were supposed to educate them in the Torah's ways, right?

I guess what RBZT did not realize that our society is run by thugs who decide what goes and where. I don't speak of Rabbonim here, I doubt that Rabbonim sent out these thugs to threaten him and his children. I speak of the grandsons of the peasants of Hungary and Rumania and Galicia who somehow think that the fact that they grew up in Brooklyn makes them qualified to dictate policy. They think that they're the ones who decide what goes and who goes in our holy neighborhoods, not the edumacated Twerskis, despite all their edumacation. So what we have here - in my humble opinion - is a life's lesson that the Twerskis may be learning now. The lesson is that they may be Rebbishe kinder and all, and they may have very noble intentions, but they're "nisht kan heymishe." The inmates run the asylum we call Heimishe Mosdos and society and no "moderne mit a shtramel fim Milvokee" is gonna come and tell an all-American from Rikoshen, who's grandfather was a shlepper and an Am Ho'Oretz how to run chadorim and schools, he knows all there is to know....
Posted by Hirshel Tzig - הירשל ציג at 4:13 PM

Could be, could be.

Thugs exactly like the "Yone" character from Der Nister's "Mashber". Nobody can stop these modern-day "Yone"s?

I hope, I hope very much, that Yakov Horowitz has been working steadily over the past few years to gather a posse of gedolim and askanim in the chareidi world to protect him from these "Yone"s. If he hasn't, then I hope he starts now. And no, R' Shmuel Kaminetzky is not enough, unfortunately.

Then again, my "positive conspiracy mode" has me thinking that perhaps RBZT released this news to the public to reduce the influence of the "Yone"s by letting the public know that they exist.

and this why the Sorbonner student is exulded from our society ,you took the lesson off your own skin

Then you can keep your holy society....

Tzig .
I agree with you. People who we used to call the bums in the yeshivas are running frum society.
People like Abraham Twerski and others are good to trot out as speakers and affirmers of the justness of heimishe society, but are not allowed to set policy.
With all my criticism , one great thing about the the Rebbe was that he was both heimish and not heimish and a such shook the world and thought about things besides bank accounts and cheap kavod.
Yasher koach !

I am assuming that Dr. BZ Twerski's father is R' Michal Twerski from Milwaukee.

ZB
If he lives in Boropark then he is probably AJ,s son, Reb Michel son BZ is the Jr. Rabbi in Milwaukee

Schneur, the sad fact about Chareidi life is that the "bums" almost always end up running frum society. They're the ones without anything better do and they're the ones with fewer inhibitions. The Meshichists didn't take over 770 because of the power of their ideas; they took it over because they had more people spendiong all day there, and more thugs to beat up people who protested at their antics.

R' Michel, a younger brother of Dr. AJ Twerski also has a son Rav Benzion who is assisting his father as Rav in Milwaukee.

A note on the Photo:

On the right is Rebitzen Devora Lea Twerski an older sister of the late Bobover Rebbe (R' Shloime zt"l) who was married to R' Yakov Yisroel Twerski.

The older boy is Reb Shlomo Twerski zt"l the Rav of Denver Colorado, a noted genius in Halacha, Talmud and Kaballa.

The second son is R' Mottel zt"l an accounatnt in Brooklyn. He was the "hidden tzadik" among the brothers. Kind and gentle with a good, uplifting, and helpful word for anyone and everyone he came accross during the day. The true "Rebbe".

The youngest (in the picture) is the famous Rabbi Doctor Abraham J. Twerski.

Interesting how two out of three buckle right over left.

R' Mottel was left handed, the other two, right handed.

Reb Shea shlita (Reb Ben Tzion's Father) couldn't give a hoot about what the chraydishe think. He speaks his mind and they bury their head in sand. They live in denial and detriment. He was talking more about spousal abuse than sexual abuse. Reb Shea has a makor for everything that he preaches in Torah and in Chassidus. The honest ones accept him. That's why I was a bit surprised with Reb Bentzion's thin skin (although I understand him totally and I'm not judging him Ch"v).

I was very disappointed with the sefer that was put on him. Maybe you have something to share about him.

R'Shlomo Twersky was a genius, but he was not the Rov of Denver.
Quit with the cliches.Just because he was a chasidishe yid does not make him The ChiEF rABBI.tHAT'S A SICKENING LUBAB SHTICK.Every young Chbdsker rotzer is 'CHIEF RABBI'

you don't think that this is BP phenomenon or recent phenomenon. The sobering realization is that thugs set the tone for the last 2,000 years. Our heritage is what thugs left us.

For many years, Reb Shlomo was virtually the only real Orthodox Rav in Denver. He became Rav in Denver in (I believe) 1948, well before Chabad started anything real in this Country.

And yes. Those who (like myself) who knew him well can attest to his genius in Halacha, Talmud, and especially Chasiddus and Kaballa. He was also the first pioneer in Kiruv, before it became a fad and the "thing to do".

I agree with you, however on one thing. I also saw the sefer of his Toires and Minhagim to which you refer. It was compiled by some of his Grandchildren who were never Zoche to see him or know him (he passed away at age 58)and does not convey even 100th of what this great Rebbe was.

I know some family Twersky family members and they tolf me that R'Shlomo was the brightest of this gifted family.He has a son R'Motty, who has a shul in Flatbush, a bit of the Carlebach style

Anon
Not even 1 vort in the sefer would give you some sliver of the "genuis"
please proof it by some kind of evidence, I am not sarcastic.

Unfortunately, there is no such thing as a "genius certificate" where one can prove ones credentials.

Those who knew the Rebbe (R' Shlomo z"tl), however can attest to his all encompassing brilliance. This list would include his Rebbe, Reb Shlomo Hyman, his Rebbe in Chasidus (the Malach) as well as his younger brothers (R' Michel in Milwaukee, R' Aaron, the current Dean of Hoftra Law School [I think], and Dr. R' Abraham). Rabbi Dr. Abraham once told me personally that he does not remember ever meeting someone who had the raw brain power of his brother R' Shlomo.

Other than that, no evidence that would be admitted in a Court of Law.

Reb Shlomo learned by the Malach???

First I heard of that, but I'm no expert. Why then didn't he stay with the group?

If I recall my facts correctly, and I think I do, R' Shlomo and a few others went to learn Chasidus by the Malach (circa 1941-42). {One of those was a brother of R' Gedalya Schorr}. The Malach showed great favoritism towards R' Shlomo [an einikal of the Mitteler and a brilliant student]. After some time, however, R' Shrage Feivel got wind of this and after one warning that they cease and desist, made them all leave Yeshiva. The sole exception was R' Shlomo when R' Shlomo Hyman personally interceded on his behalf.

Thank you for the correction.

BTW, it is also possible that he learned by the Malach's memale mokom (was there one?) and that I am in error regarding who his Rebbe was.

I heard this tidbit directly from R' Shlomo's younger brother R' Mottel zt"l many years ago so my memory might be a bit hazy on the exact dates and/or facts.

Pardon my ignorance, but would someone please be kind enough to explain what the "Malach" is all about? Thank you in advance.

In order to be unintimidated by violent thugs, one has to have an iron will and fiery fearlessness like the Rashb"o. Where are such rabonim today?

There were few, like for example Rav Bistritsky za"l from Tzfas who even died but didn't give in to some thugs and crooks.

OMG, do you see whats occurring in Syria? Regardless of a brutal government crackdown, the demonstrations continue