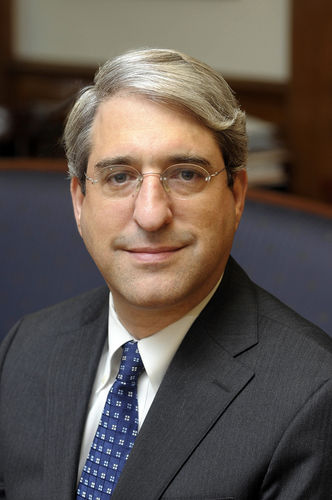 Here's how the family tree grows, as I understand it:

First there was Joseph Ha-Levi Soloveitchik of Slobodka and Kovno. He had a son Isaac. Isaac had two sons, Moses and Abraham. Moses had a son, Joseph, who was the rabbi of Kovno and was married to the daughter of Chaim Volozhin. Joseph had two sons, Isaac Zeev and Elijah Zevi. Isaac Zeev was the father to Joseph Ber (Beis Ha-Levi). His son was Chaim Brisker whose sons included Velvele Brisker and Moses. Moses was the father of The Rav, Joseph Dov (Ber) Soloveitchik. Meanwhile, back to Elijah Zevi. He had a son Simcha (The Londoner), who had a son Zalman Yosef, who had a son Yitzchak Lev (Isaac Louis, my grandfather, who changed the name from Soloveitchik to Salovey when he immigrated to this country from Jerusalem), who had a son Ronald (Azreal), who fathered three children, one of them me! So, my great-great-great grandfather (Elijah Zevi) and Joseph Dov (Ber) Soloveitchik (The Rav)'s great-great grandfather were brothers. That should clear things up, no?

My sources for this are the Encyclopedia Judaica; Shulamith Soloveitchik Meiselman's excellent book, The Soloveitchik Heritage: A Daughter's Memoir; and family legend.

Thanks for the interest in my family.

is this guy the new president of Yale??

I believe that eliyahu zvi had Verrry questionable haskofos .

"Very questionable hashkofos" is an understatement! "He had "meshugene" ideas" is more accurate!

Yes, Eliyahu Zvi was a bit of a stigma in the family. See these posts:

http://onthemainline.blogspot.com/2012/01/on-original-kosher-jesus-by-r-chaim.html
(contains his photo & shaar blat of his controversial book)

http://seforim.blogspot.com/2009/09/thoughts-on-confrontation-sundry.html
(see towards the end of the post, includes copy of shaar blat of rare bio of EZ)

This may be a reason why this branch of the family changed their last name & distanced themselves from the rest of the family.