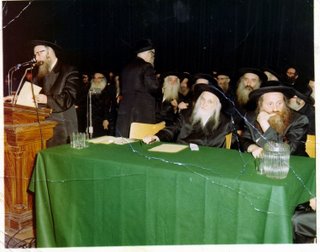 (r-l, the 2 Satmar Rebbes at a demonstration in Manhattan many years ago, others there are Reb Hershelle Spinker and the Ziditchoiver Rebbe)

YW Editor, among his stupid and ignorant comments, happened to ask one good question, namely why Chassidim don't say Tehillim and rally for Israel. The answer is simple: SATMAR. Satmar is the driving force behind all Chassidic movements today, especially in the United States, they simply wield the most influence. All other Chassidic groups, barring Lubavitch and Ger, look to Satmar to see what's right, "frum", and Heimish and then follow suit.

How it happened is another story; it could be by one of several things:

1) Sheer numbers. Satmar, being of Hungarian extract, had the most surviving members after the Holocaust, and even those non-Satmar Hungarians knew of it before the war and became Chassidim after the war. They then multiplied much quicker than any other group, and it's growth now is exponential. A large group like that usually sets the agenda.

2) The personality of the late Satmar Rov. His Gadlus B'Torah and his warm personality attracted thousands, especially in America, where the void left by the Holocaust was felt much stronger. Rabbonim in America respected his opinion even if they didn't fully agree with it.

3) Satmar has cornered the Chassidic media, which is mostly, if not all, of the printed variety. All frum Yiddish newspapers are printed by Satmar or it's satellites, and until recently those newspapers were the only source of news for Chassidishe Yidden. Hamodia has much work to do if it wants to change that, especially with the male segment of the Chassidic population. After years of reading Sender Deitsch's biting, cynical, and vengeful editorials opinions about Israel, even amongst Bobovers, Pupas, and Klausenbergers are quite negative about Israel, even if they won't go as far as Satmar when it comes to condemning Israel.

Of course no Yid wishes any harm to Jews in Israel, and prays for an Israeli victory, but they're quite confused as how to go about it. Do we daven that the "Zionist Army" of מחללי שבת & חזיר פרעסער beat the poor Arabs? How we can do that, after all, aren't they a bunch of aggressors who beat Charedim in the streets?! On the other hand we want them to be succesful and do what they need to do. Hence the dilemna. With a dilemna like that youy want them to call for a Yom Tefilah, and put their names to a Kol Koreh like that?!
Posted by Hirshel Tzig - הירשל ציג at 5:23 PM

this is huge topic. i think #2 of your analysis is the predominent and most accurate one. The Satmar Rebbe attracted so many because he offered yidden a continuity of a european yiddish culture, a home that was vigilant against being broken up further (the war), this was otherwise not really available in america. Everyone else took a deep breath and relaxed, Satmar continued to fight a kind of war. The Satmar Rebbe made a tactical move to grow Satmar and quell any rabbinical opposition...he gave out jobs to a lot of the other rebbes and rabonim who at the time were new to america and needed a parnosa....this consolidated williamsburg tremendously, and then the flock had babies, and a new generation 16-18 years later, etc., One has to admit that on a certain level, they are the winning team.

I think the yeshivishe world is more sucsessfull then satmar with a more inteligent oilam, look how nice a town like lakewood is flourishing with non of the kiyas yoel garbage, the in the face aggresiveness between the factions, there is as much Tzniouth in lakewood the only thing is the don't keep the sanzer rov shita of shietlach,

Hey hater!!
What's up?
What has Yeshiva world done to you"? His Blog covers ALL of the Chareidi world respectfully, while your 'drek' piece covers only your Farkakteh Lubavitchers.
Sorry, I expect too much from you, you 'Tziganehr' Hungarian idiot.What is your shaychus to 'yidden'?

Compared to the massive olom that Satmar has in KJ, WB, BP Monsye etc,
theys eem to be doing a pretty good job. We all know that Jews are the hardest people to keep under control. Look at Lubavitch with hardly a fifth of Satmar in Kj and how they are at each others necks. True -as in Satmar - it is the meshugoim who are the cause of it - but in our case the meshugoim seem to have taken over a large percentage of the tzibur and the mosdos.

Come on...in the "Parasha Pearls" of Jews Against Zionism of Devarim (this week), its perfectly explain.
I can send you if you want.

Should Belz also be among the list of exceptions or have they also joined the bandwagon?

As Satmar splits, will they continue to have such influence?

It is well known that during the 6 day war the Satmer Rebbe organized round the clock minyanim of tehillim for the yidden in EY.