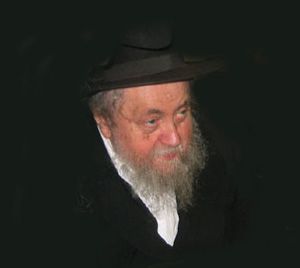 I missed the tragic news while away and didn't hear until last night. Reb Sholom Morozov passed away on Rosh Chodesh Tammuz at the age of 85.

It's tough to see the old generation go, especially when it's of the caliber of RSM, a Gaon of wordly proportions, both in Nigleh, Nistar, and Chassidus. Everything you asked him was like he had just learned it and was reading it out of the sefer. It would be quite easy to say that a Gaon of his caliber far outshines any of the so-called "Gedolim", simply because his knowledge stretches much further, not being limited to Shas and Poskim.

I did not know Reb Morazov, but I heard about him.
I sit here thiking as to what has become and what is to become of a Chassidishe shtetel.
A place with baale batim of all kinds , klei Keydesh, a rav perhaps a few morei Zedek , chedorim , schools, frum e yiddenes , poor people shlepping about loking for a nedava.etc etc. An erev shabbes energy on the street, Stores selling kosher food , a yatke, a grocery, a seforim store, shuls with a beth midrash, a mikve, Yiddisher gas, a bench (whose importance was discussed by R. Hodakovs in the Algemeiner Journal) with various chevras to learn, say Tillim etc etc.
Most Lubavitchers now live in places where they do not even have one of the factors I enumerated above. I must admit that palces like BP, Williamsburg, Ave J, Kew garden Hills, teaneck all have many of these factors that make for a organic jewish communal life.They live in glorious isolation of one kind or another.
So I wonder if people like Marasow,will ever appear on the Habad scene , after all the isolated Yishuvniks prior to the end of the 19th century were not known for their piety and lomdus.
I think shlichus is doing its thing, but I think its important to discus the future of CH and other such communites.
Can one be a Jew in isolation , and without a geographic community ?

R'Sholom was a talmid chochom a ba'al kishron a feiner yid with good middos.What I don't get is why you have to make R'Sholom greater by taking a potshot a 'gedoylim'.We are taught that you have to raise yourself to be higher not bury others to be taller.

Joe
no potshot was taken, a simple point was made, that a man who learns Chassidus in addition to Nigleh, and excels at all levels of Torah learning, has achieved more.

The timing of Reb Sholeim's petiroh coinciding with the total disintegration of the CH Beis Din reminded me of the original elections to the Beis Din in 1986 (one year after RZSD's passing).
Reb Sholeim ran for a position on the Beis Din as did, lehavdil bein chaim lechaim, Rabbi Altein (who actually ran twice). The Fisher-obsessed crowd decided that Sholeim will be ‘pro-Fisher’ and thus can’t be aloud to serve on the Beis Din. The targil masriach solution was to put Rabbi Hanzin on the ballot to deflect the gezha vote from Reb Sholeim and, at the same time, paint Reb Sholeim as some sort of an absent-minded professor not able to deal with practical matters. They succeeded: Reb Sholeim was not elected, neither was Rabbi Altein (Rabbi Heller was recruited to run against him in a second selection for the spot left open by Rabbi Hanzin, whom the Rebbe did not allow to leave his post in Petach Tikvah). I can’t help but wonder what CH would be like if that Beis Din in 1986 consisted of Morozov, Altein and Marlow. Such a Beis Din would have had one world class Talmid Chochom (Morozov), one kluger rov (Altein) and one bright young rov with a lot of potential who could have learnt much from the two senior rabbonim. The only ingredient missing - a kluge kehiloh.

The older generation of Anash hoben nit geblosen fun zikh aleyn. Its important to note their gadlus, even if they did not dress the part or play the role. I did not detect a potshot at all.Slobodka and Mir were not the only yeshivas that produced geheybene Yidden , eyb nit hecher ...

Does one not need leadership and people skills too, to be a godol, at least the eay the term is currently defined?

is it fair to assume that you're one of the "Fisher-obsessed" that Berl makes mention of?

Why did RSM not have leadership skills? who in Today's BD does have them?

I dont get what Kurenitzer is yaking in his blog, what does marasov have to do with a shtetel life.Reb Sholem was from the yechudei segula of our genaration, in the english language their is no terminilogy to describe is humbleness,a-

just a anectode on his greatness, a person that printed a few books on kabala subjects, used to consult reb sholem on a biur or marie mekomos,he asked him once on a certain source, reb sholem answered from my rebbes I wasnt teached on this, but after a 15 seconds pause he said the GRA speaks about it in 2 places, 1 in hagoes on safra tetsniosa and in tikunei zohar (90% of yeshiveshe dont even know that the gra exsist on this works) veod veod...

Tzig, what are you talking about? I simply made a comment about leadership. It's takes nothing away from RSM's gadlus, I just think that leadership is also important. Fisher? I only just met the man recently for the first time.

The 'potshot' I was referring to was Tzigs referring to 'so called gedoylim'.That's called a potshot.As I stated R'Sholom stood on his own merit without needing to discuss whether gedoylim are gedoylim or only 'so called'