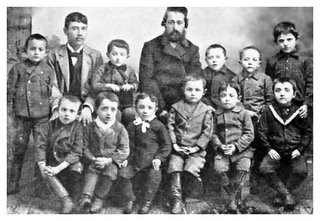 I was speaking to a very dear friend of mine and the conversation turned to the מנהל of his son's camp.

It seems like the man walked in on a young boy listening to an old MBD tape and wasn't happy about it. If you must know the tape was "LET MY PEOPLE GO", a tape that sent "shockwaves" through the Frum community for its content. So, instead of just confiscating the contraband tape (I'm not sure why even that was necessary) the man smashes the tape recorder and breaks the CD into pieces. ?ממש מקנא קנאת ה', נישט

We then begin to argue about the approach of this man, and what he was trying to accomplish by reacting the way he did. I said that whatever the Menahel did was totally counterproductive, because I believed that he was trying to educate the lad that listening to such music was not what was expected of him. Hence, overreacting like that and doing physical damage to this boy's property would not have taught the intended lesson. On the contrary, the boy was taught to despise authority and will probably turn against his superiors and educators in the very near future.

My friend saw it all differently; He says that the point of this Menahel, better yet his job, is to maintain order in the camp, by all means necessary. If it means destroying the character of the child, if it means that he gets totally turned off, none of that really matters, as long as order is maintained. Even he would agree that it's no way to raise a generation of children, but that's what this particular Yeshivah chooses to do. This Yeshivah has decided to make it their job to raise a generation of senseless, heartless goons, and they seem to be succeeding.

That menahel has no business running anything other than a kennel. And even "controversial" MBD tapes (which one could it be? Yidden, Yidden or the one where he used the word hell?) have no business being banned unless you want to force a kid to listen to non-Jewish music.

Your friend disagrees with everything in this post (Yes - including the facts of the story, your friends opinion & position).

My position has nothing to do with what ya wrote here.

I don't know about your friend, but I did know of a Rosh Yeshiva like this, in Canada, originally from a litvishe Yeshiva with which you are familiar, who behaved similarly, kicking and smashing objects to make an important mussar lesson. It was pure midas kaas, disguised as (or coupled with) a kano'ous of righteous indignation. Bottom line: The bochurim in that yeshiva were not psychologically harmed by his atrocious behaviour. Rather, they were mekabeil the "mussar", or mentally dismissed him. One can only hope that they didn't learn from his example...

i'm not clear as to why breaking a 'tape recorder' should result in the breaking of a 'cd'?

mimo nafshoch, either it was a cd player or it was a tape?

Maybe he was from ASCAP, and was worried about copyright violation.

'This Yeshivah has decided to make it their job to raise a generation of senseless, heartless goons, and they seem to be succeeding.'

I agree with you in general until the above statement. The yeshiva didn't decide anything. This menahel (over)reacted. WHy don't you follow up with the response of the Board or? after the parent complains. I'm sure that they will not say "yeah. the menahel is just following our policy."
furthermore...'raising goons'. Parents raise children, yeshivas, one hopes educate. a yeshiva could cvs hurt a kid but can't really goon him.

This is the way I remember it:

A high school kid broke some rules, and the menahel (a well know disciplinarian) told him that he is being sent home for the infractions (I don't remember anymore what the infractions were, but it had nothing to do with MBD). Anyway, the rest of the kids in his bunk made a protest - they tied the kid to the bunk and put on MBD's "let my people go" with the volume all the way up, all of them screaming the chorus "Thousands shouting NO."

So, the manahel comes - more than a little angry - and slams the off-switch... the extent of the damage to the machine is unknown.

Later, HT was saying how bad an educator this menahel is, and I was saying that this specific fellow is not considered an educator by anyone. He is a well respected disciplinarian, and his school runs without a hitch. In his school there is no kid that runs in the hall, or even thinks of a breaking a rule. He runs a very tights ship, and that's how he views his job.

I agree with you HT. This will not have a positive effect. The Menahel was should have demonstrated self control and respect in dealing with this.

When that song came out there were no CD players.. ;)