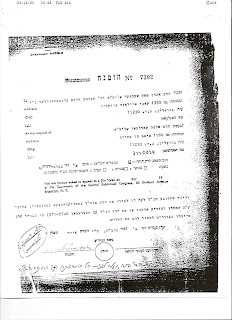 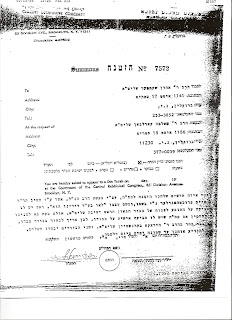 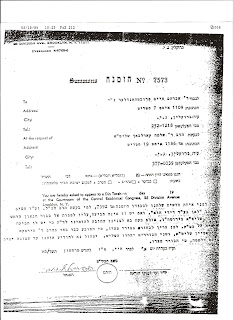 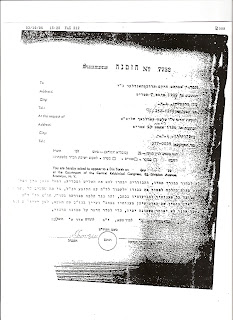 After being unceremoniously thrown out of YRCB and KGA Reb Shlomo wanted to get his day in (Rabbinical) Court. He must've figured that them being Gedolim and all that they'd surely show up and he'd get what was rightfully his. At first Reb Shlomo went to the CRC aka Hisachdus HoRabbonim. Four Hazmonos were sent, two to R' Schechter and two to Fruchthandler - seemingly because the first were ignored. Le'eys Atoh Lo Higia LeYodeinu the responses to these Hazmonos, although they may have just roared with laughter and used them as spitball ammunition or for basketball practice. After a while he must've figured that maybe they're not being Goyres the Hazmonos because it comes from a Hungarian/Chassidishe Beis Din, so he went and tried again.

To give a fair and broad perspective on all of this, you should get in touch with R' Chaim Zwebel and ask him why the Gedolim of the Agudah were maskim to have Rav Aharon on the Moetzes, despite the unanswered hazmanos.

and you think that he'd deign to answer an anonymous blogger?

Hershel I would council caution here. The Mashgiach's deparure from YRCB was an ugly divorce. As is the case in any divorce there are always 3 stories: His, hers and the truth.

Your presentation here has been extremely one-sided. Whta bee is in your bonnet anyway? Over the last several weeks you've been obsessing over YRCB and Telshe. What gives?

who said he has to ask as an anonymous blogger? Let him use his real name and post here anonymously.

All I have is this pack of information, and I allow anybody and all of you to come and refute or give the other side. That's all there is to it.

As far as me being obsessed; Puh-leez. I mentioned Telshe in passing, the main point was to give some background on myself. As far as YRCB is concerned; Maybe I just have a hangup about them and the late Rosh Yeshivah. It'll pass.

In any case, Rav Aharon's bitul to Rav Hutner was absolute. If his rabo muvhak held that he (Rav Aharon) should not be gores the hazmana, the kashe is more on Rav Hutner than Rav Aharon.

That being the case this is true only before the hazmonos were sent. Never was RIH called to D"T, I guess RSC didn't want to drag him through the mud.

All I have is this pack of information

precisely. And that is one sided. Obviously someone from the Mashgiach's camp is providing you with documents. RAMS and Avrum Fruchthandler do not read blogs and as such don't have the opportunity to defend themselves.

Maybe you should email these to the YRCB office. Maybe they have mailboxes there.

I mentioned Telshe in passing, the main point was to give some background on myself.

Nu, so we're eagerly awaiting the sequel to that post. Much more interesant than a 30 year old makhlokes who's details and nuances have, no doubt, been lost to the mists of time.

I didn't know you were so anxious to know my life's story, it's not you commented on that thread....

I have to say that this blog is really not that terrible. It talks about interesting things, it is not really disrespectful even to Litvaks. Of course some of the Chabad proganda is a bit ridiculous but that is to be expected. Much better than most of the Jewish blogs, the stiff Litvish ones, the harrendous MO intellectual ones. Keep up the good work.

see everybody? it doesn't hurt to compliment the Tzig every once in a while. It may even score you some brownie points.

What is your beef with Chaim Berlin?
Since you never learned there and have been obsessing in numerous posts and saying many unkind things about the roshei yeshiva plus a new found love for Rabbi Carlebach whom you've never met.
Makes you wonder if this has anything to do with the study of 'chassidus'.I mean people who study chassidus are supposed to be above getting involved in one sided fights,right?
Hopefully even you realize that this is one version of the events.
Also hopefully you realize that Shmeel Fried is paid to represent one side.

Also hopefully you realize that Shmeel Fried is paid to represent one side.

Just like Simcha Roth is paid to represent Bobov45....

What has Roths representation to do with anything??
The machloikes in Bobov is CURRENT,not 30 years ago!
It involves me!
What has this go to do with you?
Zero.
If so you are miserable sonei yisroel with no excuse.
What an empty life you have.

wowwwwwwwwww
how is it possible that they don't respond to the hasmanos?

"That being the case this is true only before the hazmonos were sent. Never was RIH called to D"T, I guess RSC didn't want to drag him through the mud."

Not true. Rabbi Snow (a former magid Shiur in RCB) took RY Hutner to Bes Din. The Dayanim were Rav Moshe, Rav Yaackov and Rav Mendel Zacks. RY Hutner lost (not that that helped Rabbi Snow, as RYH did all he could to undermine the Psak). Prehase that explains why he was not eager to return to Bes Din. I think Rabbi Shurkin took him to Bes Din also, but am not certian.

michoel, how in the world did someone normal like you drop in here?