Help me out here, please! 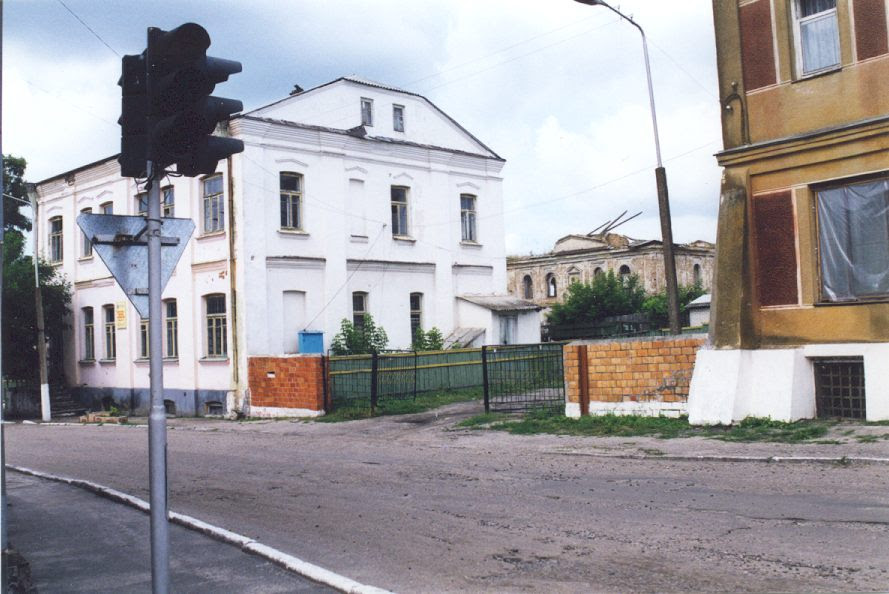 I remember reading about one of the sons of Reb Yisroel of Stolin, a.k.a. "די ינוקא", די פראנקפורטער"' Reb Osher was his name. Not much is said about him in the annals of Karlin-Stolin, but this much I found.

"A talented musician, his gifts won the acclaim of musical authorities, and he went to study at the conservatory in Berlin."

If you'll ask any Stoliner he either won't know beause he's an American boy, or he won't tell you if he knows. I have great admiration for many of the aspects found in today's Stolin, but would like to know more.

When did this take place, before or after his father's passing?

Where can we find official records of his attendance?

Are there any descendants?

I do not mean to "expose" neither him nor any other member of his family, I just would like to know.
Posted by Hirshel Tzig - הירשל ציג at 12:36 PM

You can't defend your own side so you go and find "shmutz" on others?

Litvak
what is it with you people? why must everything be an attempt to expose? why can't one want to know just for the sake of knowing?

What kind of shmutz? Is there shmutz here? Sounds like historic curiosity to me.
Shmutz would be, were Rav Shach's teffilin posul or not?

and if they were posul, so what?

The question is, why bring this up at all?

if only stolin was as well known, had as many adversaries etc as lubavitch you would have all the psuedo historians searching the archives throughout europe....

My point exactly, uzoy. Thank You. I guess there won't be many responses to this query.

The "Frankfurter" Rebbe's children were all tzaddikim, and there is no avlah in playing the violin. However, some consider it unbefitting a "Rebbisheh kindt." Therefore, out of respect for tzaddikim -- especially in these days of Elul -- I respectfully ask that you remove this from your blog. If you do so, I have no doubt that you and your family will receive much brochah in the coming year!

Breslev
1) who said anything about it being an Avlah?

2) We knew he played the violin, but did we know that he studied at the conservatory?

3) Why do you infer from my words that I said that he wasn't a Tzaddik, ח"ו?

4) Stolin of today may find unbefitting, but at the time I don't think it was questioned

5) I don't think this warrants removal of the post, does anybody else?

Were you there to defend the Kovod of other Rebbishe Kinder from other Chassidish Hoifen?

why do "Rebbishe Kinder" get a free pass and I don't?

are we to believe that he was all good just because?

litvak,
Ouch! this really hurt!
you got a sharp point there. By the way I'm a ben Avraham Yitzchok V'Yakov.

The Yenuka had a numer of sons( I am writing without books at my disposal). They were Rav Abraham Elimelech who became rebbe in Karlin and was accepted by the Chassidim in the Holy Land. Rabbi Moshe became rebbe in Stolin and was a tad more modern and active in the Aguda Youth circles. Rabbi Yankev became the rebbe in Brooklyn, Rabbi Yochonon the youngest became rebbe to the karlin chassidim of Vohlin living in Lutzk. Reb Asher and Reb Aron werenot rebbes as such, and did not have children.
I am certain that all were frum. many rebbes of the Kosenitz and Kretchineff dynasties played the violin. Some still do.
I see nothing inproper in this.
Menshe Unger in his book about rebbes killed on Kiddush hasehm in WW 2 writes a bit about the sons of teh Yenuka including the son who played the violin.
Except for reb Yochonon and his daughter only 1 other grand daughter of the Yenuka survived the war Reb Yankev in Brooklyn had no issue either.
Today's rebbe is a very serious rebbe very much living up to his Holy ancestors.

Am I not being clear enough?

1) I know about playing the violin and all, the Kretchnifers play like 5 year-olds (you'll excuse me). I'm asking about his joining the Berlin Conservatory of Music, nothing else.

What we have here is selective criticism by today's "policy makers" in the Charedi world. They choose to highlight the history of some who they may disagree with just so they are "neutralized" and disregarded.

how could playing a violin be considered unbefitting?

For those who daon't get it:
This site is a response to others.
Many feel that Lubavitch has skeletons in the closet unbefitting of Rebbeshe families (The Rebbe in college, Barry G., The Alter Rebbe's son Moshe, etc, etc, etc). The point here is that todays critics have no perspective.

I will check my books tonight. There are several accounts of the Stolin karlin dynasty. But Berlin conservatory to a Russian jew was like a Parisian fashion or a Vienner doctor.

Zezmir
You think they'll get it now?

Kurenitzer
We'll be awaiting your researched response. Thank You.

talking music, Peske freidman (daughter of famous polish prewar rebbe & aunt of today's munkatcher & diniver rebbes) writes re: her father hiring a male music teacher for her sisters music lessons. can anyone imagine this happening today without some mirrors getting broken in rebbes house?????

which Polish pre-war Rebbe would that be?

There's also the daughter of the Kozhnitzer Rebbe (I may be mistaken) who had plenty of tutoring in seclar subjects. She wrote a book in Hebrew which was subsequently translated into English.

oh! sorry :( I missed the part about her being the aunt of The Munkatcher and Dinover.

to be fair, had the Munkatcher Rov known then what he found out later he PROBABLY would not have made the Shidduch. That's what we're led to believe today by the revisionists.

In most interwar Polish Chassidic hoifen , the females received some secular education if not more than some. There are autobiographical accounts in Hebrew , Yiddish (Itta Kaisz of Vorka) and even an English translation by Dr. Pollin of such an autobio. Women then as now were granted a greater degree of freedom in this matter.
So bringing a "raya" from a female doesn't prove much.
I recall reading in the academic annual POLIN about a old Arel presently alive in Gura Kalawaria who was the Polish tutor of the Pnai Menachem of Ger as a child.
While there may very well have been more than few Polish and especially Ukranian eyniklech who left the derech OR modernized I am hard pressed to think of anyone until 1951 who actually becam e a Chassidic Admor with a college education. The issue is were there university trained chassidci children who retained a foothold in their ancestoral hoif. I think the Lubavitcher rebbe was unique in this respect.
There was of course Reb Bunem of Prysizcha who was a pharmacist and a rebbe who had been a doctor in a previous incarnation.
The Stefaneshter rebbe's nephew and heir apparent Rav Menachem Nachum of Itzkan -Vienna had a excellent grounding in general philosophy and wrote some Chakira books. But he was sharply criticized for this by his uncle the Czortkover rebbe.
Many eyniklech of Ruzhin and Tchernobel strayed from the Chassidic path and became Zionists and worse. Ahad ha"am was one such example the dramatist Yochonon Twersky, the scholar Dr.Samuel Horodetsky, the Yiddish writers Baruch Hager, Menashe Ungar and Yankev Friedman were all secular and sons of rebbes.The present Sadigurer rebbe shlit'a had as secular brother.Dr. AJ HEScheL also left the Chassidic world and even Orthodoxy to a certain degree. The list is long.
By the late 20th century we had many college educated rebbes the Novominsker the Zviller rebbe of Boston, the Monashtritzer rebbe, the late Rabbi Dr. I. Twersky in Boston held the title of Talner rebbe. I am sure there are a few others too. cCllege means very little these days especially places like CUNY and other community schools which are basically vocational schools rather than institutions passing on the traditions and values of Western culture.

Kurenitzer
but we still have not heard from you about Reb Osher Perlow. Have you further information?

Can this be explained? Why allow women and young girls, who have no Hebrew education to keep them "in line", to be tutored by irreligious and Christian tutors?

I just found my old copy of בית קרלין- סטולין, written by Yaakov Yisraeli, in it he mentions very little about Reb Osher, just that he lived in Stolin, in the Chotzer of his brother Reb Moshe.

I fail to see how so many Yerushalayimer like the Brizel and other families joined Karlin. They were not of Lithuanian stock. The Rebbes were definitely not the same speed as them as is evident from the fact that many left at the first opportunity. The first thing the Rebbe did that they did not agree with and they were outta there!

Reb Moshe of Stolin was probably the greatest Rebbe of the Stolin before the war, and surprise, surprise, an avowed Zionist, so I guess the Yerushalayimer Kanoyim wouldn't accept him as Rebbe.

The standrad books on Karlin do not mention Reb Asher in Berlin. I recall seeing Menashe Unger writing about it . Let me try finding it.

The Yenuka had a numer of sons( I am writing without books at my disposal). They were Rav Abraham Elimelech who became rebbe in Karlin and was accepted by the Chassidim in the Holy Land. Rabbi Moshe became rebbe in Stolin and was a tad more modern and active in the Aguda Youth circles. Rabbi Yankev became the rebbe in Brooklyn, Rabbi Yochonon the youngest became rebbe to the karlin chassidim of Vohlin living in Lutzk. Reb Asher and Reb Aron werenot rebbes as such, and did not have children.
I am certain that all were frum. many rebbes of the Kosenitz and Kretchineff dynasties played the violin. Some still do.
I see nothing inproper in this.
Menshe Unger in his book about rebbes killed on Kiddush hasehm in WW 2 writes a bit about the sons of teh Yenuka including the son who played the violin.
Except for reb Yochonon and his daughter only 1 other grand daughter of the Yenuka survived the war Reb Yankev in Brooklyn had no issue either.
Today's rebbe is a very serious rebbe very much living up to his Holy ancestors.

the kozhnitzer rebbe was brought up in the home of the "Bais Aaron". he was an orphan. He learned music there. The Kretchniff story is different. R' Mordchele Nadvorner wanted to be the first to teach his sons Alef Beis. Someone went ahead and taught his son R' Meir'l later the kretchniffer rebbe alef beis. His father was goizer on him to forget. It took a few years, and during that time he played violin.