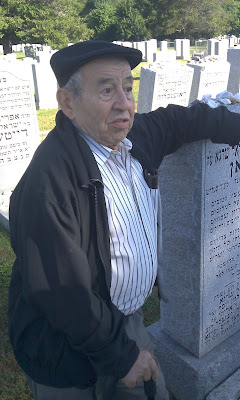 He is a Satmarer Chossid. The Rebbe would stay in his parents' home in Sevlus before WW2 when he would visit. He's closely related to many of the knakkers in Satmar today. He remembers many of the old people from that time period, including many who are no longer with us. He remembers how they carried the Chakal Yitzchok of Spinka, הי"ד, from his house in the Ghetto, on a makeshift box with wheels, to the train that would take him to his ultimate death in Auschwitz. But he makes sure to tell you that by no means was his סעליש a Spinker town. "ער האט נאר געוואוינט דארט." He has somewhat of a different view as to what life was like back then. I met him in the cemetery last Friday where he was visiting his wife's relatives who are interred there. I was also there visiting Kivrei Avos. He may be elderly, but his shver passed away only three years ago, at the ripe old age of 96. The Shver was also from Sevlus, and came out with them at that time. The younger people there with him at the cemetery spoke Russian to each other, a testament to the re-education that the Soviets made sure to implement. He was a young lad of 14 when he returned from Auschwitz, and despite the fact that (at least some of) his brothers managed to leave Europe, he stayed behind.

When he came to New York the first thing he wanted to do was to see the Satmar Rebbe, who was staying in Belle Harbor at the the time. The Rebbe had already had his stroke, and was recovering. Yossel Ashkenazi would not let him in to see the Satmar Rebbe. He told Yossel, "דיין טאטע וואלט מיך יא אריינגעלאזט", but Yossel didn't really know the people from the Old Country, or maybe he was too young to remember, so he refused him. As he's walking around the house he sees someone he thinks he recognizes from back in Sevlus and he asks him: דו ביסט נישט אפשר פלוני בן פלוני? The man looks at him and asks him the same thing, recognizing him as well, despite the many years that had passed and despite the fact that he had looked different back home. That kind gentleman took him around the back, into the kitchen and into where the Satmar Rebbe was sitting, and introduced him by name. The Rebbe asked him who's son he is, mentioning all of his zeide's children by name. He then held his hand and asked him וויזוי מ'האט זיך געפירט דארט די אלע יארען. The man answered "אזוי ווי מ'האט אונז געהייסן פון דאנעט." Because of the situation there they could not daven keep Yiddishkeit properly, he said. They would daven Shachris at 3-4am, and Mincha at 10-10:30pm. "ראש השנה אויך, און דערנאך איז מען געגאנגען אין דער ארבעט. ס'נישט געווען קיין חכמות."

We spoke for a while about some other people from Sevlus, like some of the characters in the book we discussed a while back. Of course he knew them all, and concerning some people he would say " איך האב אים נאך געקענעט נאך פאר --------" or "ער האט דעמאלט נישט אויסגעזעהן ווי היינט." All with a twinkle in his eye, smiling ever so slightly, not trying to "out" anybody or anything like that, just telling it like it is, I suppose. The conversation was short but very sweet, all with the unadulterated Yiddish we all love. He's not that old, but he walks with a cane and was having difficulty standing there, leaning on his late brother's Matzeiveh, so we said goodbye before we really wanted to. A strong sense of sadness is what I feel when I look at him and remember his story. I imagine it must be really difficult living there when all of your family is in the greatest free country on earth enjoying the finer things in life, not to mention Ruchniyus too! His family also turned out to be quite different than his brothers' families, and that too probably isn't easy to stomach. I just pray that G-d grants his many more happy and healthy years.
Posted by Hirshel Tzig - הירשל ציג at 11:48 PM

"He's closely related to many of the knakkers in Satmar "

hey what's a 'knakkers'? although it rymes with 'kakker' i asuume it's related! so the kakker is related to the knakker oh what a match!

"Bal Harbour" is in Florida, I assume you meant Belle Harbor, NY.

I wonder if he knew my Uncle in Seilesh?

I'm sure he did

Very nice post Hirshel - maybe you follow up with him for more? Im sure he has quite the stories to tell from before the war, during and after. Yasher Koach!

If a Bachi goes to a tzadik then it is OK, his soul has some feeling for the Tzadik, but observation from a Bachi on a tzadik yesoid oilem, Rachmona Yatzilinie,
I am no Spinker chosid, but my folks who were Belzer saw this great tzadik bavodosoi

he went to a Tzaddik, or had one come to him at least... Just not to the Spinker Tzaddik.

We have all these zeese yiddn in their upper 80s and 90s now. Some are real tzaddikim and tzidkonyos. And we are losing them every day. It is a tragedy that they are not being mobbed by us for their every memory.

What he likely meant to say was that the Chakal Yitzchok ZY"A was not an official Rav in the city yet the main 'Chassidishe Hoif' in town. He had no authority on them like, say, Munkatcher Rov the Minchas Elozor, rather more like the Belzer Rov when he was in Munkatch during WWI etc..

That said, even in Munkatch there were way too many people that didn't fit the description Orthodox let alone Chassidish and the Rov's authority had no bearing on them.

anon
"What he likely meant to say was that the Chakal Yitzchok ZY"A was not an official Rav in the city"
BTW,
who was the offical Ruv in Selish then?