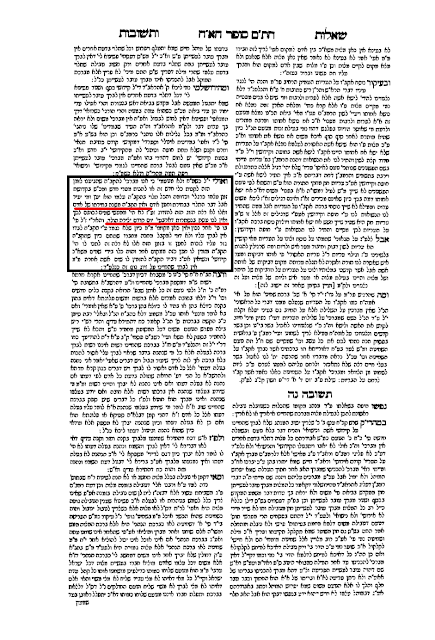 So basically if your zivug is from a poor family and you say no because the Rushiveh told you that you should insist on 10 years plus an apartment in some new development so that you can learn Torah במנוחת הנפש ויישוב הדעת, and you think that it's in the bag because of everybody knows that "if it's bashert there's no way to lose it," Think again. As a bachur some well-intended relative told me the same thing, but he said it only happens if you join Lubavitch... The CS seems to think that it's not that limited. Anybody can ruin his "bashert," for any reason. The problem is, how is one to know that this is the right one?
Posted by Hirshel Tzig - הירשל ציג at 11:15 AM


The SR z"l writes something similar, and brings a ראי' לדבריו that we see even on ת"ב you could close a shiduc why because שמא יקדמנו אחר and he lucked out on his mazel!

He paskens that a person is mechuyav to marry a poor bas talmid chochom, rather than a rich bas am ho'oretz

everybody knows that "if it's bashert there's no way to lose it,"

In my experience in litvishe yeshivos, bochurim (at least thinking bochurim) don't believe that. The conventional wisdom is that if you do your hishtadlus (which includes not being too picky), and have siyata dishmaya, you may be zoiche to end up with your "basherteh". This is usually illustrated with a rebbishe myseh - an eltereh bochur once went to the Steipler for a brocha to find his basherteh. The Steipler answered that the bochur had already "met" his basherteh years ago and rejected her, and she's now married to someone else.

The C"S seems to be taking this a step further and discounting the concept of bashert. He says Arbaim Yoim Koiden Yitziras Havlad doesn't mean what you think it means.

My New Hashkafah of Shidduchim :-)

My new hashkafah of shidduchim is thanking and praising HASHEM always :-)

Even when my dating experiences are far from pleasant, I realize that HASHEM is guiding my life with His infinite wisdom and abundant love, and exact precision that only He is capable of :-)

HASHEM always knows what is truly good for me, even when I do not :-)

Often what I need most is atonement and humility, so G_d gives me those precious things through unpleasant dating experiences :-)

I now realize that I must always thank HASHEM for ALL of my dating experiences, because even the worst dates are for my eternal benefit, because they provide me with precious atonement and humility :-)

Tractate Avot teaches that the reward for a good deed is proportionate to its difficulty; by giving me difficult dating experiences, HASHEM is providing me with greater reward for Olam HaBa, in addition to precious atonement and humility :-)

G_d loves me even more than I love myself, and He would never give me an unpleasant dating experience unless it was for my eternal benefit in both Olam HaZeh and Olam HaBa :-)

Thank you for all my dating experiences, whether pleasant or unpleasant or mediocre :-)
You are always guiding me with endless wisdom and love; You always help me and give me everything I need :-)

I regret all the times I complained;
instead of complaining, I should have been busy thanking You.
THANK YOU HASHEM!!!!