Why did Agudath Israel not want to be part of the Jewish Welfare Board? 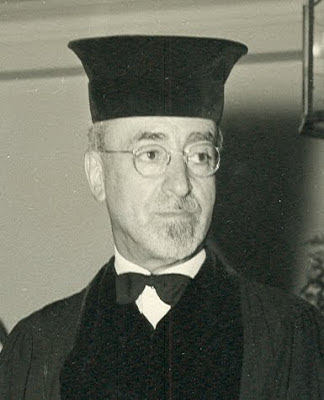 The following letters give us a glimpse into some of the happenings in the Orthodox Jewish world at the outset of WW2. The attack on Pearl Harbor had yet to happen, but there was talk of War, and as such the needs of the soldiers had to be met. Rabbi Leo Jung was Orthodox, as you all know, as was Rabbi Herbert Goldstein, so this wasn't a Stephen Wise we were dealing with. Did Reb Mike not believe that they could handle the needs of Jewish soldiers properly? It seems a bit odd that he would want to go around them just because. I'm sure a frumme bochur in the army could get the tefillin and heter to not use a razor through the JWB just as much as through the AI. And I doubt that the latter would have more pull than the JWB, even of they were more sympathetic to a frummere bochur's needs. Maybe you all can fill in the details. Some of us are losing sleep over this. The letter seems to be signed by Rabbi David de Sola Pool, Rabbi of the Spanish Portuguese Synagogue in NYC and a musmach of the Hildesheimer Seminary. Reading between the lines WILL show you a bit of the "talking down" that Reb Mike gets from RDdLSP, and gives you a general idea of what the Yekkes thought of the Agudists... 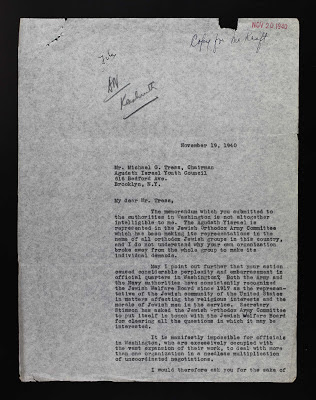 ע' ספה"ק
They called him mike

Why be mistapek bimuat if you don't have to? JWB had its limitations, see. Lieutenant Birnbaum.

Let us not forget that Malcolm Hoenlein, of "The Conference of Presidents of Major Jewish Organizations" has a job to this very day because fdr's bureaucrat's couldn't be bothered dealing with more than one Jewish organization at a time.

Its bears to reason that the jwb with its limitations was pressured to get Reb Mike out of the way...

this definitely needs context. IMHO, before posting inflammatory letters like this, do some more research. it's definitely not a simple macho situation.

I couldn't tell you about WW2, but Aleph doesn't get along with the current incarnation of the JWB, to put it mildly and tried/tries very hard to 'go it alone'.

I loose sleep because I an sure any frum wanabe canget a sufficient zealotry inspiration from the local existing kiruv org , why push for a lub org?

This letter is historic! And goes to show that tress was a hero! Wasn’t concerned with formalities hierarchies and Peking orders, here or when it came to hatzalohs nafushes either! An agudist by name only all right! But He worked alone and without the doomed Aguda! No wonder satmar rav z"l admired him! He passed the stress tress test!זכותו יגן עלינו ועכ"י

ps: The agudah (read stress) on bedford ave had a direct hand in the hatzolo of SR z"l while the egud harabunim! tried than to stop him! with same reasoning as in this letter!

DeSolaPool was on the left fringe Modern Orthodox, not the type that the Roshei Yeshiva Mike worked with were inclined to trust.

The JWB is exactly the kind of organization the Agudah of old wouldn't like: formed by representatives of all 3 "Denominations", to be for "Klapei Chutz" mossad of all Jewish soldiers. It has been working very well, under the radar or political interest of the 11 Roshei Yeshiva team. Given the kinds of things they have to implicitly sign on to in their representations to the Army Hierarchy, I can understand why a Kanoi wouldn't like being a part of it.