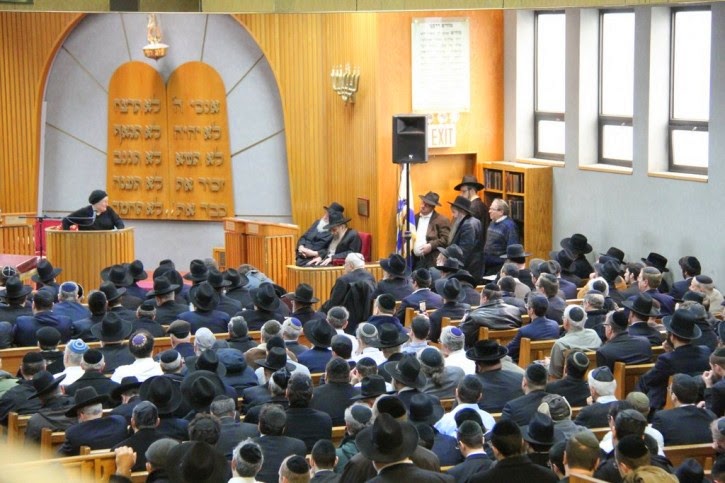 I assume that VIN posted this story with that headline to grab attention - which it did. The story is a heartbreaking one. What can one say? Somewhere out there feminists are smiling. I also guess that after the dust settles, so to speak, somebody out there will criticize the shul, and maybe some the black-hat Rabbonim who attended and did not speak up. I did not know the niftar, but they say that he had a tremendous amount of Ahavas Yisroel and did much to bring Jews closer to Hashem and his Torah.

I am certain that rrf would not have attended had he known that a woman would be maspid but his sensitivity to the mourners prevented him from walking out in protest.

He was the brother of the controversial r' marc gafni

How common is it for women to be maspid in your circles? 5towns / eish kodesh allow?

The ad in the yated from fidelity, his employer quotes his mother's hesped! How is that for modern progression!?

as long as shes not ordained and the mohel does metzitza bipheh.

well the Satmar Rebbe writes in a Teshuva in Divrei Yoel that it is strictly forbiden. As the gemore cites in Sucah cites how the hesped on Moshiach ben Yosef will look like.

But surprise!
Which woman was maspid the Satmar Rebbe himself in the Beis Medrash?

whoever would object to this heartbreaking hesped of a mother eulogizing her beloved son,is nothing but a criminally insane ignorant savage monster,don't care whether he is a Rebbe,rosh hayeshiva,or a tzadik
CHAIM.S

can you recite her hesped? did you hear her recite the bracha after she tore her dress as required.

can you recite what she said? did she tore her dress with a bracha ..

Wow, hormones are raging over here. Where does Vizhnitz come in? Are they always the other side of the fight?

what happened in Benai Berak? who buried whom? when?