Elefant in the room... (sorry about that) 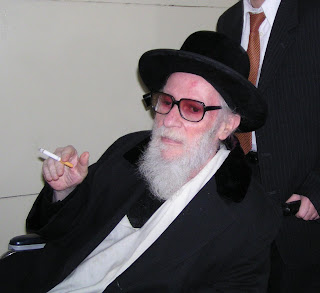 ITRI. It's not as flashy a name as Ponovezh, Slabodka or Mir, but most of you know it, have at least heard of it, or may even have learned there or know someone who did. It seems like ITRI is not what it used to be anymore, Machlokes has ripped that place asunder, and a very small group of boys learn there now. Last week the Rosh Yeshiva, Reb Mordche Elefant, passed away, dealing another blow to the Institute. let me preface all this by saying that I know very little about him and the Yeshiva. The observations I'm making are based on what I've seen on forums and what I heard from people this week.


Here's what I heard from some very proud Litvaks(in italics, my comments are in normal scripts)

1) He had the Brisker Rov's (yesh lomar Reb Chaim's) kesovim and boasted about it to everybody that would listen. That means that the Rov never actually gave it to him, he got his hands on it somehow. Sounds to me like a Chassidishe Geneiveh. If he publicized them and let the world learn from it, then Tovoy olov brochoh. Why should the Solovejczyks just hold onto it like it's the most precious thing in the world, and that only they're allowed to see it or learn from it? Many of the kesovim in Chabad today are only available because of Chassidishe Geneivos - geneivos of chassidishe kesovim & chafeytzim. I never understood why one had to shlep to Bene Beraq and knock on the door, begging to buy a set of Kehillas Yaakov. What about bittul Teyreh? what about Kovid haTeyreh of Benei Teyreh? It must've been the chassidisher opshtam; "never trust a gevorener," they always say... Who do they think they are, bringing in all their chassidishe shtick into our communities? The beards and the peyos and the getting married early, and all the other chumros?! This isn't Hornosteipel, ya hear? we did things differently back in the old country!

2) He was the only one who wouldn't walk out backwards when leaving RYH's presence. This was mentioned on another blog without mentioning RYH, for some reason. I think he has some kind of beef with Chaim Berlin and its personnel. Here is another case of copying everything he saw happening in Lubavitch. Why the need to follow others if he was so original? We may never know the answer. RME said that he didn't do it for RAK, so he won't do it for RYH, which is cute, using RAK to belittle RYH. At least for me, it is. Take one look at the picture and you see that even when confined to a wheelchair he took nothing from nobody. You might say he was the last of the independent Litvaks; he did what he wanted to and marched to his own beat. The glasses, the scarf, the velvet on the collar and the cigarette remind you of a bygone era, when bosses ruled the big cities. 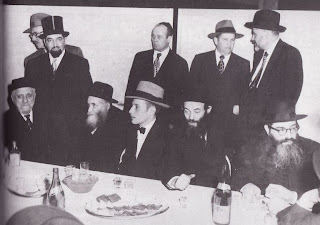 3) Zaydie Herman didn't like him at all. RME was a son-in-law of Nochum Dovid, brother to Racoma and Bessie Herman. The only frum people in the Lower East Side, they would have you believe. At least that's the way the book makes it sound. So Zaydie was very frum, so much so that he made life for his poor kids absolutely miserable, and he didn't like what he saw in young ME, no matter what kind of gutte kop he had. You might say s'hut em nit dershmekt. He had a good nose, the old Litvak. I'm not sure what it was he didn't like; maybe he was a little too smooth for him. Not that RPS was any less smooth looking back in the day, but it's hard to tell just from pictures. Why, even Reb Leib looks like a Flatbush Baal HaBuss in the picture, and we all know he wasn't one. Which is interesting, because in America most of the old Europeans changed their Levushim to a more respected hat and frock. But maybe this was still before Reb Leib got married. Maybe one of you can help me out here. The wedding picture was in 1951, was he married yet?

Reb Mordche was seemingly unique in our days that he never got the memo that all Litvishe Gedolim were also Kedoshim Merechem Imom. We know that chassidim believed this to be the case, but in the Olam Hayeshivos diLita this was never the case. So if you came to RME and told him where you're learning or where you learned in the past, he would let go with all the Loshen HoRah he knew about the Rosh Yeshivos. While a mature young man can maybe handle that expose on his Rosh Yeshiva, a 17-year old may find his world caving in after spending some time with him... My customary obligatory double-standard cry would be that he was best buddies with all kinds of irreligious politicians and members of the Israeli elite, but with him it was OK. Not only was it OK, but it was cute and cool. Yet the Rebbe got attacked by the very same zealots for accepting SHaZaR and other such politicians and for giving Hakofes to anti-dati Israeli politicians and such. Reb Mordche nebach had no children and probably died a broken man, seeing how his empire had crumbled these last few years.

listen tzig
you are really stepping over all moral boundries

what bothered you? tell me where and I may listen to you

what's that supposed to mean?

hardly your most egregious piece.

but if you do close... can I be yoresh all your readers /commenters???

"RME was a son of Nochum Dovid, brother to Racoma and Bessie Herman"

son-in-law, not son. It's since been corrected.

Long time since I read such a silly mix of fact and fiction.
You did not know the guy, why are you trying to write about a person you knew nothing about?

You have ) to say about the Kinnus, the Hachnosas Sefer Torah? Not even one word? Really strange!

Hirshel,
I've known for a long time that you are a lowlife scumbag a poosteh keily of the worst kind.Lately however you are showing your true colors on this blog and in cyberspace.I'm referring particularly to your attack in the story of the choson from Boro Park.Firstly for some reason you were terribly bothered that this story did not hit the most widely read heimishe site so the family should have even more agony.Your rishes stooped low enough that even when the father in his pain left a recorded message you had to say something nasty about it.
This post with its mocking headline and nonsensical substance is another facet of your personality.
Not stam did a person like yourself join latter day Lubavitch with it's lack of substance and it's all out war against perceived enemies.To top it all this cult is pushing a dead,reincarnated messiah something they borrowed from Christianity

we mamesh see how the galus HaShechineh is what really pains you, and all you want to do is to make a kiddush hashem. May Hashem help you build a bayis neeman beYisroel BeKorev Mamosh!

I didn't hear any pain in his voice

the whole thing is weirder than weird. There is alot going here that we do and do not know. Please don't try and pull the wool over all of our eyes at once. The recording sounds creepy, IMHO.

You did not hear any pain in his voice , proves what?
To me it proves that you are an unbelievably shallow individual that thinks that you can gaige a persons true thoughts from a five minute recording.
The whole thing shows your terrible rishes.This is a tragic story.Just leave it alone.

Hirshel,
what makes you think that Yidel is a alter farkvechter bochur? is it the misery? I would like to know how you read so well between the lines

I envy your naivete

life was tragic here, it seems, death maybe could have been avoided...

why do I think he's a miserable alter bachur? I took a shot in the dark. I may be wrong.

You envy my naivete?
Which part?
I said it's a tragic story best left alone at least by people who know zero about it.I know nothing more than reported and so do you.
Maybe you meant my naivete regarding second comings?Maybe

For some reason when two tragic stories occurred in Crown Heights some time ago week after week,with a train......
The silence was deafening from The Tent....
Wonder why

Guys
Don't expect this Chbdsker to answer for the next coupla hours.He''ll be watching the Lubab goon team 3000strong doing their annual p.r convention.These c"s are spending north of 6 figures to prepare an army armory for a one night banquet!!
Can you believe the waste of communal money?

yidel, have you read that motty borger told his wife he was molested in yeshiva, should we still leave this alone? are you insane?

yidel, have you read the new yor post this morning. the last words which motty spoke to his new wife? shal everybody sit back and be silent? ROTZCHIM!

yidel, if this was your son, would you want this swept under the rug? when i first read this, confirming what i knew right away, i thought that maybe, maybe this can be the turning point. but no, the murderers r leading our people...

it was the probably the most economical way to run a event like this way,you Are sick Tzar Eiyen. you re from the Bilem camp,

HT,
Going back to your original post, what happened at Itri? Some of my classmates from elementary school went there, and they used to talk about it breaking up. They had nicknames like Itri, Vitri and split three. Was RME the cause of it or the victim? Your post is incomplete and without loshon hara, rechilus, and put downs, try to fill in the story.

"Hirshel,
I've known for a long time that you are a lowlife scumbag a poosteh keily of the worst kind.Lately however you are showing your true colors on this blog and in cyberspace.I'm referring particularly to your attack in the story of the choson from Boro Park.Firstly for some reason you were terribly bothered that this story did not hit the most widely read heimishe site so the family should have even more agony.Your rishes stooped low enough that even when the father in his pain left a recorded message you had to say something nasty about it.
This post with its mocking headline and nonsensical substance is another facet of your personality.
Not stam did a person like yourself join latter day Lubavitch with it's lack of substance and it's all out war against perceived enemies.To top it all this cult is pushing a dead,reincarnated messiah something they borrowed from Christianity"