Reb Baruch Ber. A teyerer yid. An Ohev Yisroel. Kulo Torah. Ah Tzaddik. The Olam HaYeshivos commemorated 70 years since his passing this week. Yet if we were to believe this story told by his Talmid Reb Yitzchok Scheiner of Yerushalayim We see how all that was "missing" was being one who follows the teachings of Chassidus. Because had he seen that he would've realized that the mission now is to help the Yid needing help, not focusing on the Rashba. Here's the story:

“One day, several Polish policemen appeared in the beis hamedrash. Without hesitation, I jumped straight out of the window and ran to shelter in a hiding place. For some reason, my jumping out of the window had many repercussions in and around the yeshiva. In my distress, I went to my teacher and Rebbe, Rav Boruch Ber, to ask him what I ought to do. “I went into the Rebbe’s room and told him the whole story of my problem with the passport, asking for his advice. Rav Boruch Ber sat there, tears streaming from his eyes. He said, ‘Forgive me, my dear son. You’ve been telling me your problems for a quarter of an hour - but what can I do? My mind is completely taken up at the moment by a difficult Rashba. I didn’t hear a single word that you said, but I understand that you are in trouble. I can’t help you. Go to my son-in-law Reb Reuven. He, in his great wisdom, will give you good advice.’ And that is what happened.”

Ad Kan MiPi Reb Yitzchok Scheiner. I guess after telling the story the question arose as to how such a tzaddik could not tear himself to help another yid b'shaas HaS'konoh, so the damage control was soon on the way. Here's how RYS saw why RBB could not help him:

"Rav Boruch Ber demonstrated that it means that one’s mind isn’t at leisure to see or to understand anything besides the Rashba! The mind is shut off to anything else and can take nothing else in. Yet the heart still grasps that there is a young boy here with a serious problem. The heart responds in its own way even while the mind, which is absorbed elsewhere can’t grasp what the pain is about and what the problem is. The heart still understands its own language and can arouse tears." 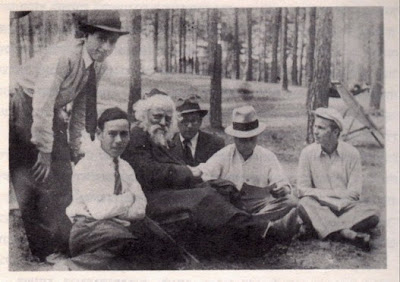 When we speak about what Chassidus accomplished some of us may have a hard time pointing to something in particular. Often times we read about the great geonim of di Lita and we wonder what was amiss in their life that the Heiliger Baal Shem Tov had to come along and revolt against the establishment - which is what he did. We read about the great Ahavas Yisroel that Yidden like the Chofetz Chaim, Reb Chaim and Reb Boruch Ber had and we scratch our heads. What was so terrible about how they lived and treated the simple folk? The simple folk were just about the same, with or without Chassidus. They said the same tehillim and basically conducted themselves very much alike one another, so what did the Besht do that raised the standing of the Ish Poshut? Maybe, just maybe, this story can cast some light unto this mystery. The Alter Rebbe taught us that a cry of a Yid takes precedence, and that such a Mitzvah must not be passed on to another Yid, especially if the other man is also Osek BaTorah.

Hirshel,
Please.You misread the article in plain English.R'Yitzchok Scheiner is not a talmid of R'Boruch Ber and never saw him either.He married a grand
daughter.The story was with Dayan Grosnass from London.Although R'Boruch Bers head could not "hear" his problem his heart did and cried with him.This type of immersion in Torah in almost unbelievable.The gemorah relates that a certain Amoiro had a tora chidush in the beis kisseh and the gemorah asks, how could he have thought about divrei torah in such a place? The answer is that it was an "oines", he could not stop thinking in Torah! R'Boruch Ber was one of the few people where such an immersion applied

we know the lesson from the baal hatanya because he walked in on his son, who's baby was cring and berated him for not hearing the babys cries because he was in dveikus...

Hershel your Criticism is off the mark here. R' BB 1) Showed concern and compassion
2)Did in fact take care of the problem. He sent him to his eidim who was more capable on dealing with the issue.

In the Uvdos VenHagos LeBeis Brisk you find much better stories. Where if for some unknown Din, compassion wasn't warranted some poor jew would just be mowed right over.

Read it, you'll have a post a day Tzig.

From the story of the Miteler Rebbe you see that if not his fathers lesson he would act as Reb Boruch Ber, its ain"t so simple.

Hirshel
the AR wanted to back out on Yechidus for Materialistic stuff according to his letter,Obviously Chassidim didn't back off.

I do not agree with your assessment about RBB story. Could you not see a story just like this happening with the Rogatchover? There are rare neshomos whose entire achizoh beilom hazeh is Teiroh. Besides, RBB felt real empathy and took care of the problem. What's missing here?

I also don't agree with your statement that the poshuter Yidden in the two camps "where essentially the same". That is just not so – the chasidisher hanocheis permeated the simple folk among the chasidim in an incredible way and gave them a completely different outlook on life. I have seen this first hand!

r' baruch ber was born between chai and yat kislev and was named after r' baruch'l of mezritch and the maggid.

Berl
Reb Borech Ber is far from the Ragachover, he was fond of neginah, I lately heard that after he composed aNigun he went for his Rebbes (RCB)approval

Chusid,
are you for real? his folks were chassidim?

You bet chassidus solved R. Boruch Ber's problem. It made sure that no one would be immersed in a Rashb"a.


I don't believe that learning chassidus will make someone a better Jew than someone that learns the Chofetz Chaim's seforim. Just the opposite is true. The results are self evident.